'Do not forget that student wing of Congress party, the NSUI has also opposed Fanaa in Gujarat and my petition also includes that,' argues the outspoken film director, reiterating also that 'it is wrong and illogical for the states to ban D 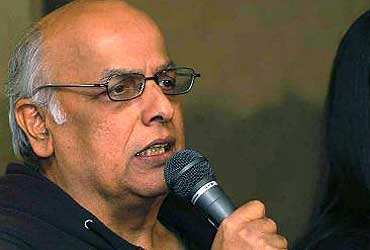 The impasse in Gujarat continues with theatre owners unwilling to screen Aamir Khan's Fanna in the state, despite the Supreme Court ruling on Monday, June 5 that they could seek police protection to exhibit the movie.

Earlier in the day, the Supreme Court had dismissed the petition filed by Mahesh Bhatt jointly with Gujarat-based NGO Jansangharsh Manch, asking the Court to direct the DGP of Gujarat to ensure uninterrupted screening of the film. "We are not inclined to entertain this petition. However, if any exhibitor who wants to exhibit the film and wants protection they can be given," a vacation Bench comprising Justice Arijit Pasayat and Justice C K Thakker had ruled. "You may have the right to see film but you cannot compel the exhibitor. Let the exhibitor come here," the Bench said when Bhatt's counsel Colin Gonsalves submitted that "it was because of some group or people, who have taken law in their hand" that the film could not be screened.

Meanwhile, Manubhai Patel, President of Multiplex Owners Association maintains his earlier stand: "We have just heard of the Supreme Court decision. However, we maintain our stand of not screening `Fanaa' as Aamir Khan has not yet apologised to the people of Gujarat for his anti-Narmada dam stand." He says that the Gujarat government was ready to give security for screening of the movie earlier also, but the movie was not released in Gujarat due to Aamir's stand. Aamir, on his part, has ruled out apologising once again. Updates

Nagendar Sharma: Why are questions being raised on freedom of expression in the world's largest democracy ?

Mahesh Bhatt: I fail to understand whether this is the same country for whose freedom our founding fathers gave up everything in their lives â€" their comfort, family lives and the choice of living their full age. If today we feel that we do not have a right to say whatever we wish to express, then it is time to raise our voices for protecting our freedom of expression.

Listener from Allahabad: Sir, we live in a secular democracy where film actors are seen as role models and their actions are replicated in real life also. In such a situation, should not the film stars behave with responsibility? Don't you smell religion and politics in recent statements of Aamir Khan ?

Mahesh Bhatt:  Let me make it clear that the public interest litigation (PIL) that I had filed in Supreme Court was neither Aamir Khan centric nor Fanaa centric. What I submitted before the apex court was that a process has been going on in the country, which we have been seeing since the time film Fire was opposed. Shiv Sena activists had torn the posters and burnt banners, which was the beginning of a dangerous trend, and this has been happening regularly since then. What I asked the court was why in our country was the film that had been given a clearance certificate by the Censor Board not being allowed to be screened in a particular state.

There are certain norms of every country and in ours, it is the responsibility of the Censor Board and none else to see whether a film is fit for screening or not. I am unable to accept and digest that since some people are opposed to Aamir Khan, they would not allow others to see the film. I had precisely asked this to the Supreme Court and demanded that Gujarat government reign in elements who are doing such acts and the state government be asked to ensure smooth screening of the film in the state. What I had requested the court is to see that freedom of expression and right to livelihood are protected. So far as the question regarding opposition to Aamir Khan is concerned, those who are against him or his views have a right to express their views freely too. However, this has to be within democratic parameters. If one were to believe that any of his statement was wrong or his understanding of any issue is limited, you have a right to criticise him, but to say that you would not allow a film featuring him to be screened is a dangerous trend and needs to be checked straight away.

Nagendar Sharma: But Mr Bhatt if any actor takes up the role of an activist on any issue, then he must be prepared to face opposition and criticism for that. Since India is a large country, the forms of protests would be different, why be worried about the consequences then?

Mahesh Bhatt: I agree that if Aamir Khan has taken up the role of an activist, and if his stand is not liked by some people they have a right to speak against that. What I am saying is that in the film Fanaa, it is not Aamir alone, but livelihood of the entire film crew attached with that film â€" right from producer, director to technical staff â€" the livelihood of all of them is being affected. People opposed to Aamir are behaving exactly the way America behaves, that if you have to settle scores with Osama bin Laden you attack Afghanistan, similarly if you are looking for Saddam Hussain, you would attack entire Iraq â€" this is the point that I am trying to make. We live in a democracy and are proud of that. Freedom of expression is not a right confined to the personalities of film world, nor is it their sole domain. It is a right of every individual of this country, and I am fighting as and on behalf of fellow countrymen.

Nagendar Sharma: But Mr Bhatt why have you and other Indian film makers decided to remain silent on the banning of Da Vinci Code by at least five state governments?

Mahesh Bhatt:  Who says so? It is a pure lack of information and if this news has not reached you, it is because media also selectively portrays some things. Our Film Producers Association has strongly demanded that Da Vinci Code be screened across the country without any problem. Since the Censor Board has given its certificate to the film, there should not be any curb on showing the film. Let me tell you that Sony Pictures â€" the distributors of Da Vince Code, are members of the Film Producers Guild and we would fight for our members. It is wrong and illogical for the states to ban the film after it has been cleared by the Censor Board. All this is a fight for freedom of expression and we would not relent.

When you talk of freedom of expression, do not expect to see or hear only that what you like -- at times you would feel uncomfortable and pained too. Till the time when your thought process is not disturbed and belief pattern shattered, artistic expression is incomplete till that time. Politically correct sweet-talk is certainly not freedom of expression. Look at great revolutionaries and social reformers in history, all of them spoke and practiced what was either taboo or totally unheard of in their times.

Listener from Delhi : Sir, but what is the limit of freedom of expression? Can M F Hussain and the Danish cartoonist be allowed to hurt religious sentiments in the name of this freedom? And, Sir, why did you selectively choose to go to Supreme Court against the non-screening of Fanaa in Gujarat, as the state government has not banned the film?

Mahesh Bhatt: Let me make it clear that it is not for the first time that I have gone to the Supreme Court for protection of freedom of expression, nor have I gone against any individual or any single political party. In September last year, when the UPA government decided to ban smoking scenes in films, we challenged that too. My point is that since you have not banned smoking in real life, your banning of its portrayal is unjustified. First you outlaw smoking in the country, then only the government can ask the film makers to not show it. I have challenged the government decision despite the fact that neither I show nor glamourise smoking scenes in my films. My fight is for safeguarding the freedom of citizens of this country against hypocritical and anti-democratic decisions. Therefore your question is based on lack of information that I chose only Fanaa and Gujarat for my PIL.

I assure that whenever freedom of expression would be attacked, I would be in forefront of the protests. Do not forget that student wing of Congress party, the NSUI has also opposed Fanaa in Gujarat and my petition also includes that. So far as your question on MF Hussain and the Danish cartoonist is concerned: yes, if they hurt religious sensitivities, their works should be opposed, but in a democratic way and from the democratic forums and not violently. It is the responsibility of artists to be careful about social sensitivities, but they cannot be condemned for other considerations. If the opposition is based on democracy, we would stand by it. However, if in the name of protests, riots were to be engineered, then the government has a right to step in and prevent loss of innocent lives at the hands of those who have a sinister agenda

Listener from Dubai : Bhatt sahib, would you continue fighting for freedom of expression even if some individual's work if screened could lead to a law and order problem?

Mahesh Bhatt: Let me make it clear that already there is a Supreme Court ruling in this regard. Law and order questions were raised on a film by well-known South Indian director K Balachandran. When the matter came up before the apex court, it had ruled that it is the duty of the state to maintain law and order, and somebody cannot be prevented from portrayal on the law and order pretext, the state has to take steps to see that rule of law is maintained and unnecessary curbs cannot be allowed on any individual's freedom on grounds of apprehension.

Listener from Delhi: Sir, are Indians socially intolerant? After many years of independence, different freedoms should have grown, here we find they are being increasingly questioned. Are we heading towards a rabidly intolerant society ?

Mahesh Bhatt: Let us accept the reality that everyday one has to fight for freedom. It is not a static thing, we cannot sit idle presuming that we became independent on 15 August 1947, that would be a folly. The fight for independence, dignity and one's rights is a continuous one and does not end at any point. I feel it is human nature to impose your views on others. This can be seen in our daily lives, our relations, we like to see things happen the way we want, without caring what others think and this is the same at the national level, that is why we experience such problems. Now the thing is how you perceive it. For example look at the film world, it is a big world â€" many people did not say anything on the issue, some others said a few things and left it there â€" while a few decided to pursue the cases of their rights of freedom at a higher level.