Bir and Billing are small villages located about 14km apart in the Kangra valley. While

Bir is known for its natural beauty, distinctive Tibetan culture and vast tea gardens, Billing is popular for its adventure sports – the village offers travellers the opportunity to para-glide, hang glide, trek and camp outdoors. The most famous spot in Billing is its paragliding take-off point, which is the world’s second highest, towering at 8,000ft, offering panoramic views of the valley below. The landing site is in the western fields of Chowgan in Bir.

Bir is easily accessible by road and Himachal Roadways buses regularly ply to the village from Delhi. It is also well-connected to the nearby hill stations of Dharamshala and Palampur. Though most famous for paragliding, Bir has a lot more on offer than just adventure sports – the little village also boasts of magnificent views of the Himalayas, beautiful monasteries, and Tibetan settlements. Bir is best explored on foot – walk down its narrow lanes and appreciate this humble village’s surprising beauty. Bir is a delightful smorgasbord of sounds and colours. The Buddhist chants carrying out from the monasteries merge with the sound of gushing streams and colourful prayer flags fluttering in the wind. Young monks play around and the smell of fresh food hangs invitingly in the air. There is a lot more to Bir than just the hustle and bustle of thrill-seeking tourists. The village really manages to bury itself in your memory with its peaceful and serene environs.

It was in October 2015 that I heard on the radio about a paragliding word cup being held in our country in Bir-Billing. I had never heard of such a thing before, and my curiosity was piqued. Through my research, I found out that the paragliding spot at Bir-Billing was Asia’s highest and the world’s second highest. I decided then that I would have to visit the villages and go paragliding, especially because they were a mere 12 hours away from Delhi.

Fast forward to December 2016, a crisp cold wind greeted me as I stepped out of the bus at Bir. However, it wasn’t the chilly wind that took my breath away that day, but the mesmerising view of my snow-peaked surroundings. I had taken an overnight bus from Delhi and it was rather comfortable. I was staying at the local Zostel and they had tied up with a paragliding operator so that I could experience tandem paragliding (pilot operated and guided). The paragliding can also be pre-booked, but it’s not particularly necessary.

Different forms of paragliding are offered at Bir Billing ranging from tandem to solo (professional) para-gliding to hang gliding and parasailing. The operators here also run various courses and provide exclusive training sessions that may span over months. Paragliding costs anywhere between ₹1,800–2,800 depending on the season. When I visited, the cost for tandem para-gliding was ₹2,000 without video recording and ₹2,500 with video recording. An important thing to remember is that even though there is no age limit, children below the age of 18 require parental consent. The only limitation for this sport is that you must weigh below 120kg.

The take-off site is a 30-minute car ride from Bir. The paragliding operators mostly organise the commute to the take-off site. The road connecting Bir and Billing is one of the most beautiful routes in the Kangra Valley – this road was hewn out of the rockface in 1962. It can only be traversed on foot or in a jeep. You can also opt to trek till the take-off site the night before your flight and camp there.

Tip If you have motion sickness, I would recommend taking a pill before you head to the site as the road has hairpin bends that can test any stomach.

Paragliding starts at about nine in the morning and continues till sunset. I chose the early morning slot as I was told that the wind speed at that time makes for a safe and pleasant flight and there is a shorter waiting time. However, if you want a bird’s eye view of the stunning sunset at Bir, the evening slot is highly recommended.

An average flight can last 15–30 minutes, depending upon the weather conditions.

Tip Do not carry any bags to the take-off site as you cannot paraglide whilst carrying baggage. You can keep your phone in your pocket. Some operators offer to take care of your belongings and hand them back to you, however it’s best if you avoid carrying any items altogether.

A paraglider surveys the verdant landscape beneath him

At the launch point at 8,000ft above sea level, the wind speed will blow you away (literally!), and the experience is exhilarating. The view from up here is bound to leave you absolutely awestruck and speechless. For anyone who feels like grabbing a bite to eat before the flight (I won’t blame you if you don’t – your nerves won’t let you stomach anything), there is a small shop here that will give you your fill of Maggi, chips, biscuits, etc.

I wasn’t too wracked with nerves before my flight as I didn’t have that much time to think about it – there were just three people ahead of me and the winds were in favour of the flight. And before I knew it, it was time for lift off!

The pilot positioned the harness and the seat on me and as I had opted for video recording, handed the GoPro to me. He then set up the parachute for our flight. Once he had prepped the parachute, he attached my harness to it and patiently instructed me on how the flight was going to progress. The first step of paragliding is taking flight, or jumping to the ground and missing. Once the pilot says “Go!”, you have to run blindly towards the edge of the cliff and before you reach the end, you are scooped up into the air by the parachute. While running, it’s important to remember that, if you falter or stop, it can result in a very bad fall, which might lead to some gruesome injuries. I saw an example of this before me and it was not a pretty sight. In all honesty, it’s not as scary or difficult as it sounds; you just have to listen to the pilot and before you realise it, you will be soaring like a bird in the sky!

Once in the air, the pilot asked me to pull a flap towards the front, which turned into my own little seat. It was smooth sailing after that. It felt like flying in the sky on my own personal throne!

The sight of the valley after the take-off is breathtaking and the feeling of sailing in the air is absolutely indescribable. I have a slight fear of heights, so I was not too comfortable pulling out my phone to click pictures, but if you’re up for it, you’ll get some Snapchat and Instagram-worthy pictures.

My pilot, Mahesh, pointed out the Dhauladhar Range to me in the distance – enormous, awe-inspiring snow-covered mountains. Below my feet was a part of the Kangra district and it resembled an assembly of small Lego houses nestled amongst an abundance of greenery. The Sherabling Monastery, which was clearly visible during the flight, is also quite a remarkable sight.

Colourful Buddhist prayer flags at the Sherabling Monastery in Bir

Mahesh also informed me that the winds are better in the summer months, between April and June, allowing for longer flights and clearer views as there is no haze. So if you wish to enjoy longer flights, opt for paragliding in these months. Before landing, Mahesh asked me if I was okay with a few paragliding tricks. Since I had seen quite a few landings the previous day, I knew exactly what he was referring to and I was quite excited. After I agreed, I found myself screaming as Mahesh made the parachute do a cartwheel in the air!

The landing site situated within Bir is enormous. As you are about to land, do not forget to give your best smile, as there are professional photographers waiting there. You can instantly get these pictures transferred to your phone for ₹200.

The landing is quite a smooth process. The pilot will ask you to either run on landing or position your legs parallel to the ground. As I was not too confident about running, I kept my legs parallel to the ground and barely felt the landing. After this, the harness is removed from you and your flight culminates there. The video recording of your flight is delivered to your hotel on the same day if the flight was in the morning, and the next day if it was in the evening.

After your nail-biting, adrenaline-pumping experience, I would recommend heading to the Silver Linings Café right next to the landing site for a cup of cappuccino to celebrate. The coffee is accompanied by the enchanting view of all the colourful parachutes hovering above the village, landing one after the other.

The paragliding operators usually arrange transportation back from the landing site to your hotel, after which you can explore the quaint little village of Bir.

In Billing, you can camp on the carpet-like grass. There is no habitation at Billing, though tea shops and dhabas come up in summer.

When to go All year round. The weather is most pleasant in summer, but this is the height of the tourist season. Winter is cold, but milder than in Dharamshala, and so best for those looking for a winter break

Road Palampur falls on NH154 that runs across the breadth of the Kangra Valley, linking Pathankot to Mandi Bus HPSRTC runs 4 Volvo bus services from Delhi’s ISBT Kashmere Gate to Dharamsala from where you can hire a cab for ₹2,500–3,000 for a full day service in Palampur and Bir-Billing 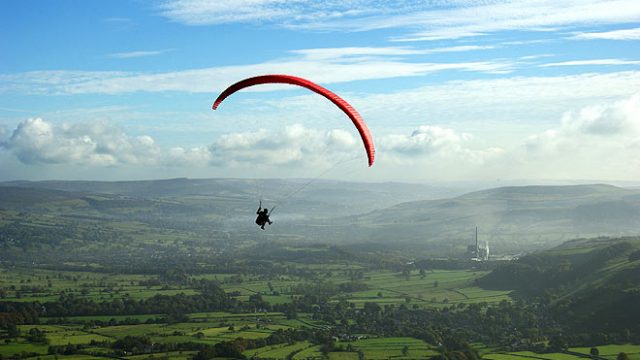 AAI Paragliding World Cup 2015 to be held in India

Himachal Pradesh to host this international event from October 23-31, 2015