is different from the northern Dussehra; it has nothing at all to do with Rama, his story or his triumph over Ravana. India’s major religions are highly accommodating organisms; as they spread, they absorb the religious practices of their new followers. Festivals thereby come to contain within them multiple celebrations, joys and memories of various communities, ritualised, evolved and then assimilated over long periods; gods and goddesses get multiple names and stories. In Mysore, Dasara is a festival devoted to the goddess Chamundeshwari, who killed the demon Mahishasura, and who literally lords it over the city from her hilltop abode. The demon is said to have lived in these hills and gave Mysore its name.

The festival became institutionalised here and attracted state patronage during the reign of the Vijayanagar rulers. An Italian traveller, Nicolo Dei Conti, witnessed the celebrations in 1420 and left a detailed account – the Wodeyar rulers made Chamunda their tutelary deity, and began the tradition of the regal Jambu Savari in 1805 during the reign of Krishnaraja Wodeyar III. The king conducted a special durbar in the Mysore Palace during Dasara, which was attended by members of the royal family, special invitees, officials and the masses. With the amalgamation of Mysore State into the Indian Union, the pageant is now flagged off by the chief minister or governor of Karnataka, and attended by the scion of the Wodeyar family. Hence, the celebrations in the Mysore Palace are quite a spectacle to witness.

I am up and about early in the morning on the tenth and final day of the festival. My hotel balcony offers a view of the palace and I can see an insistent stream of people making its way towards the palace gate. There is a sanguine energy in the air as the sea of humanity seamlessly blends in with the ardour of the surrounding gaiety. The festivities drape everything in view, connect all of it together – palace, roads, trees, shops, police, their mounts and people – infect every heart and produce a mega celebration, the Mysore Dasara.

The crowd outside the palace and along the procession route is unbelievably thick. There are cordons, demarcating the boundaries, trying to contain the bodies and their fervour, but they spill over, on to the road, trees, rooftops and just about every perch in sight. The overwhelming faith of this population gives the festival its sustenance. The faithful have traversed many miles, have come in from the surrounding villages and towns, will wait hours, come rain or sun, to get the fleeting opportunity to pray to the deity who is royally touring the city in a procession. 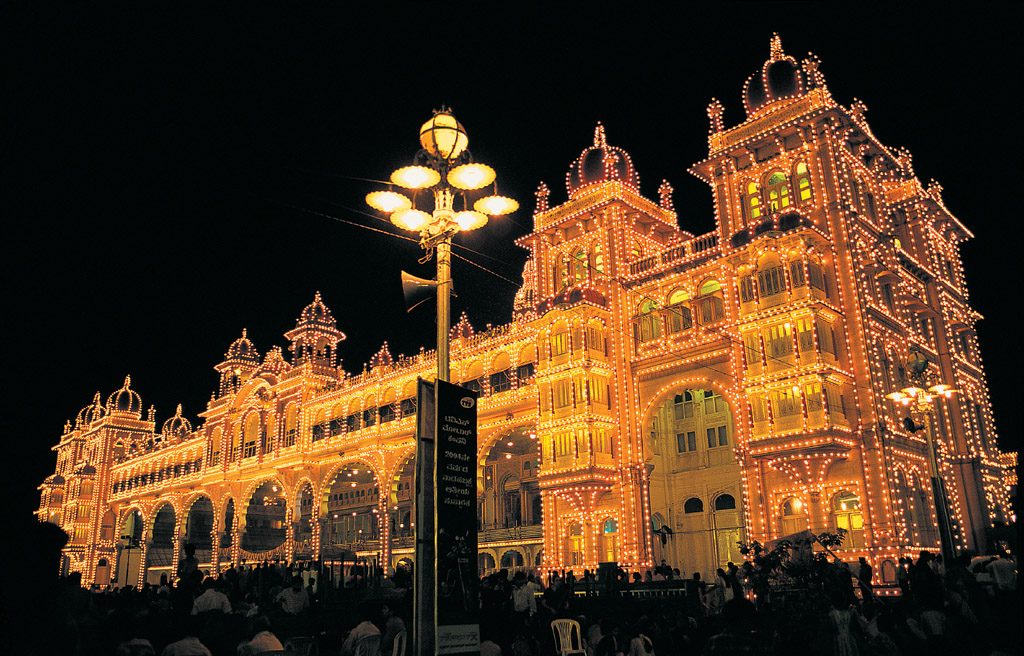 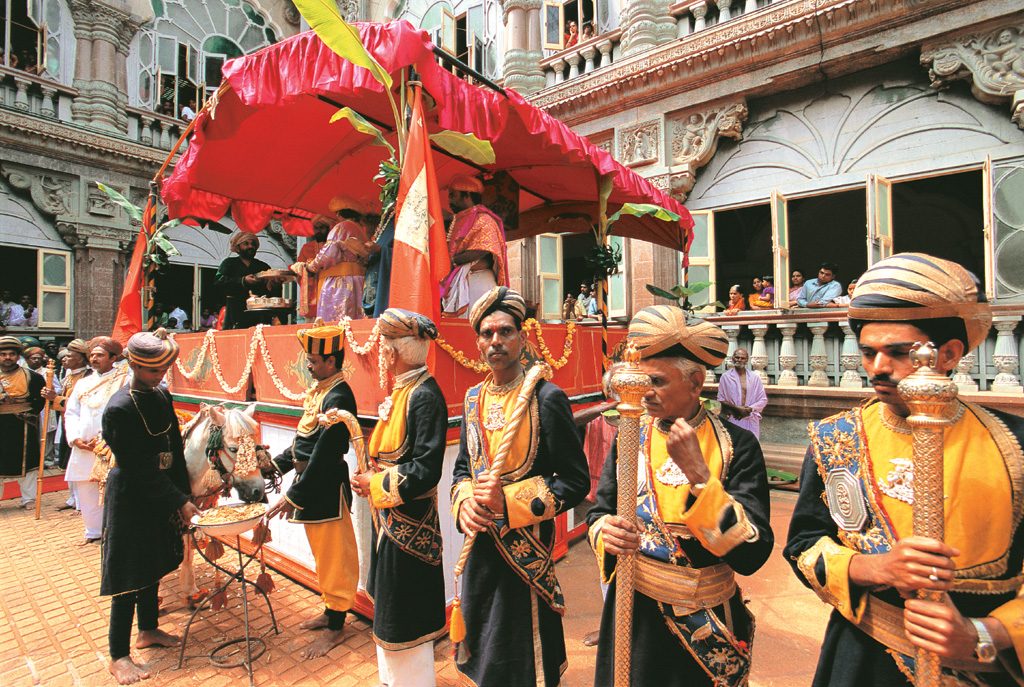 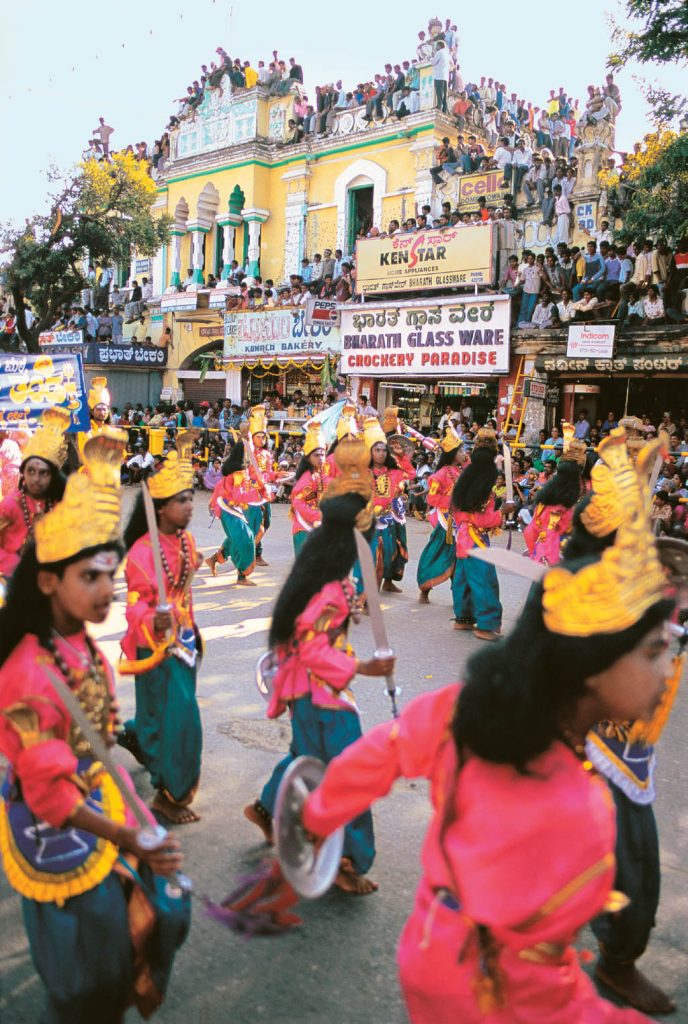 This procession, called the Jambu Savari, is the culmination of the 10-day long Dasara festival. The Mysore Dasara celebrations are spread out across several locations in the city such as Jaganmohan Palace, Town Hall and Kalamandira. However, the most important venue is in the grounds of the 20th-century Mysore Palace. This becomes an open-air setting with the majestically lit palace providing a stunning back-drop to classical Indian performances. Every evening, as the sun sets and spreads its reddish glow in the western skies, nearly 97,000 palace lights come on, all at once, converting the gigantic structure into a dazzling silhouette and leaving the assembled crowd agape.

The palace is also where the Jambu Savari begins. A puja is held in a temple within the palace complex, after which the procession is inaugurated by the governor and the scion of the Wodeyar royals; at around 2.00pm, they climb a stage and shower flowers on the idol of Chamundeshwari, sitting in a golden howdah atop Balaram.

Balaram is the elephant for the day, clothed in the most brilliant blues, yellows and magentas. Amidst sounds of cannon fire, several pachyderms accompany waves of dance groups, music bands, horses, camels, vintage cars and colourful tableaux out from the palace gates on to Mysore’s streets. The grand pageant moves at a snail’s pace and takes about three hours to cover the 4.5km-stretch to the Banni Mantap grounds. The entire route of the pageant, cordoned off with ropes and with people packed on either side of the road, is heavily policed. Moving in the thick crowd, I realise that it is here – on the sidelines, beyond the barriers through which the procession moves – that the real throbbing heart, the spirit of this lively celebration, lies. These crowds give life to the exploits of the entertainers and performers; without this adoring audience, the entire show is but an empty routine. The crowds love the entire display, and clap, laugh and scream at every opportunity. But it’s the diminutive idol of the goddess that has the biggest, the most significant presence. Crowds greet her with loud worshipping cries, the young run after her, the elderly plaintively bow to her, as the 10-day-long fiesta comes to an end.

For food, head to Sri Harsha Road, which has many restaurants. The restaurants in Hotel Viceroy and Hotel Parklane offer decent south Indian, north Indian and Chinese cuisines. The restaurant at Hotel Dasaprakash serves delicious south Indian thali. For desserts, look no further than Guru Sweets on Sayyaji Road, for the legendary Mysore pak, which the city is famous for.

Rail Mysore Junction is connected to Bengaluru, Chennai, Delhi, Mumbai and many other cities

Road From Bengaluru, it’s a smooth ride down SH17 via rural Mandya Bus There is a bus for Mysore every 10 minutes that leaves from the Majestic Bus Stand. The Volvo service is pretty comfortable and costs about ₹450 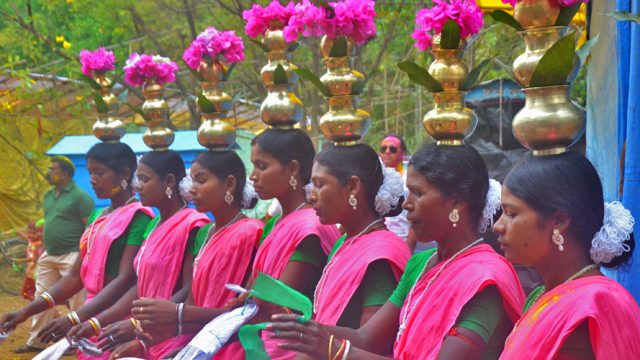 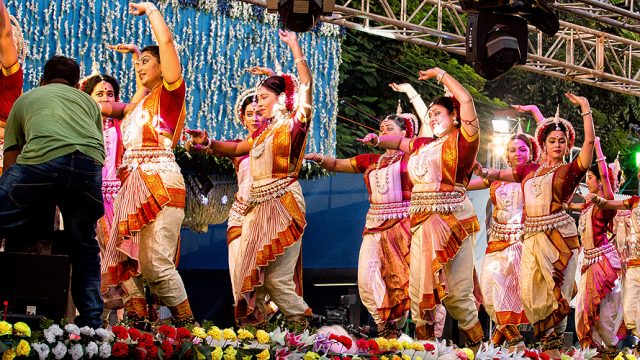 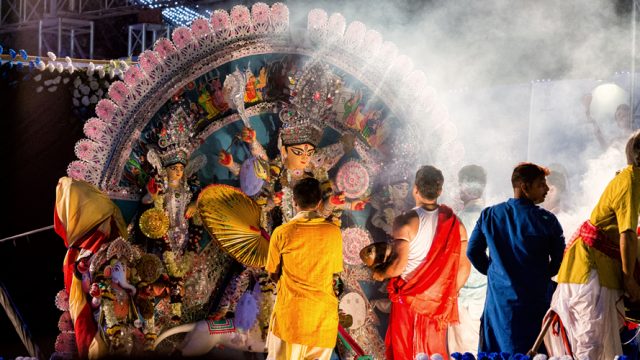