Even after years of insurgency, army occupation and frenetic tourism, Srinagar hasn’t lost its charm.

To the outsider, already drunk on pherans, yakhnis and shikaras, it continues to feel like a medieval city by the Jhelum. During the Mughal era, Srinagar was a favoured summer retreat for royals who left behind picturesque gardens. Then came the British, who were not allowed to buy land here. Hence, they made local boats into the now legendary houseboats. The city was the summer capital of the erstwhile Jammu Kingdom and continues to be so to the state of Jammu and Kashmir.

From the time the houseboats on Dal Lake served as floating homes for the British to today’s tourist hubs, they continue to be an important part of Srinagar’s heritage. Along the iconic Dal, covering an area of 21sq km, a long and cheery boulevard lines the waters on one side, and a series of tourist interest spots on the other – the Shankaracharya Hill (with a 6th-century Jyeshtheshvara temple on top), an entertainment park, the Mughal Gardens, numerous shops, restaurants and hotels. The colourful shikaras and houseboats attract your attention with their bright yellow canopies and dark maroon carpets. They advertise “full spring seats” and in one case a “smiling owner”. And that, definitely, is Kashmiri heritage.

In the heart of the old city, the first sight of the Jama Masjid’s expanse, its pale stones and tall spires, can take your breath away. Originally built by Sultan Sikandar in 1394, the Jama Masjid was damaged by fire thrice, each time being rebuilt by the reigning local sovereign. It was reduced to ashes again in 1620, and rebuilt by Jehangir and Shah Jahan, only to burn again in 1674. They say when the news reached Aurangzeb, he was more concerned about the chinars in the vicinity, and then went on to build the beautiful monument you see now. The most remarkable feature of the masjid are the 378 pillars of devdar wood that hold up the wooden ceiling. The courtyard is a pleasant space with a fountain, lawns, chinar trees and a backdrop of the Hari Parbat Hill.

The most photogenic of Srinagar’s old buildings, the Khanqah (a holy place associated with a Sufi saint as well as a place for gathering, praying and studying Islam) is perched on the right bank of the Jhelum. Mir Sayyad Ali Hamdani was a 14th century sage who left his native Iran to avoid Timur’s oppressive reign and visited Kashmir thrice. He was such an energetic proselytiser that many credit him with the spread of Islam in Kashmir – it is said that he converted 37,000 locals in a few days. Many miracles are attributed to him as well. This spot commemorates his first visit to Srinagar in 1372.

The building you see today is a wonderful melange of wood carving, colourful green-and-yellow painting on the walls and a dominant spire on top. Note the stone plinth on which the structure stands – it belongs to a temple that stood here whose priest became Shah Hamdani’s first disciple. Non-Muslims and women cannot enter the main hall, but can walk up to the door and look in through a window.

For the best views of old Srinagar, walk over to the new Zaina Kadal bridge at sunset and capture the Jhelum as it winds past the old domes and wooden structures, under the old wooden bridge, and past the Khanqah of Shah Hamadan. Close to the Zaina Kadal is Noor Jehan’s Pathar Masjid. Rare for Srinagar’s monuments, this one was built using limestone. Its patroness then managed to get the mosque bad press by saying that it had hardly cost more than her jewelled shoes. The scandal was so great that the horrified local clergy boycotted it and the mosque has suffered many indignities over the years, the least of which are a few bullet holes from an ‘encounter’. It is nonetheless an impressive building with a pleasing garden.

Commissioned by Jehangir for Noor Jehan in 1619, Shalimar Bagh is a four-terraced spectacle of chinars and water courses. The most interesting element here is a baradari, a summer house, with black marble pillars from Pampore and gorgeous painted ceilings. Jehangir had named his garden Farah Baksh (delightful). He loved Kashmir so much that he visited Srinagar at least 13 times. Shah Jahan had the garden extended, the Pathan and Sikh rulers of Kashmir used it too, and under Ranjit Singh it even hosted European visitors.

Nishat Bagh is carved out of a hillside, built over 12 terraced levels, rich with magnificent old chinars and flowers, with a central water channel punctuated by fountains. It was commissioned by Nur Jehan’s brother Asif Khan in 1633. Legend says that Shah Jahan, was so taken by the garden that he expressed his appreciation thrice to Asif Khan in the hope of getting it as a gift. To no avail. This led to a minor falling out between the two; for a while Shah Jahan actually turned off the water supply for Nishat, which came through his Shalimar!

The Hazratbal Shrine, famed for housing a strand of the Prophet’s hair
Courtesy J&K Tourism Department

Standing on the far side of the lake, its white marble reflecting gracefully in the waters, Hazratbal is the only domed mosque in the Srinagar area. It is important because it holds a sacred relic, a hair, of Prophet Muhammad, referred to as the Moi-e-Muqqadas. The story goes that the hair was brought to Bijapur by a descendant of the Prophet. He sold it to a Kashmiri businessman, Nur-ud-Din Eshai. Aurangzeb then seized it and sent it to the Ajmer Dargah, but later restored it to the owner. The Moi-e-Muqqadas reached Kashmir in 1700 when Eshai’s daughter, Inayat Begum, built this shrine to house it.

The hill of Hari Parbat is crowned by the 16th-century fort of the same name. It was built by the Afghan ruler Shuja Shah Durrani. The fort dominates the city from almost any angle. This has not been lost on the Government of India, which preserves the heights of Hari Parbat as a panopticon for the security forces. Local tradition also acknowledges the hill as a site of power for more ancient and occult reasons. According to legend, the entire valley used to be a massive lake inhabited by the malicious demon Jalodbhava, until the goddess Sati dropped a pebble on his head. The demon was crushed when the stone expanded into a mountain – Hari Parbat.

The most charming of Srinagar’s staying options are the houseboats. They have decent ‘deluxe rooms’, carved wooden furniture, attached loos, decent breakfast and dinner, and a common balcony. Rates are fixed by the Houseboat Owners’ Association and usually range between ₹2,100–4,800 (room only) and ₹3,400–7,400, with meals.

Most hotels have restaurants that serve good Kashmiri food.

Martand is a rewarding visit for anyone interested in Kashmiri heritage. The 8th-century Sun Temple here is located on a hilly plateau with a backdrop of the snowy Peer Panjal.The choreography of carved stone, elegant pillars and graceful arches is a pleasure. The temple is ascribed to Lalitaditya Muktapid of the Karkota Dynasty, a great builder.

The Avantiswami Temple ruins are on the Srinagar-Pahalgam Road. The temple was built by king Avantivarman, the first ruler of the Utpala Dynasty of Kashmir in the 9th century. It is dedicated to Vishnu and offers some recognisable sculptures and carved stones.

The temple at Pandrethan on the outskirts of Srinagar is a well-preserved monument. It retains a pyramidal roof – one of the few intact exemplars of this distinctive Kashmiri form. The familiar trefoil motif is also present in four vents at the top of the pyramid. There is also an exaggerated projection of pilasters and porches on all four sides of the structure, a strangely Gothic feature. The temple is identified as the Shiva Rilhaneshvara temple, built by Rilhana, Jayasimha’s minister, around 1135. However, Pandrethan is itself a much older site. The name is in fact a contraction of ‘Puranadhistana’, which means ‘Old Capital’. This was the site of the original Ashokan capital of Srinagar. The area has now been absorbed into a military base and civilian access is difficult. There are a few more worthwhile alternatives. The 11th-century temple at Payar, near Avantipur, is tiny, while the 9th-century CE Vishnu temple complex at Buniar near Baramulla, is considered the best preserved of the larger Kashmiri temples. At Naranag, near Wangat, off the Srinagar-Sonamarg Road, stands a complex of temples, two of which are ascribed to Lalitaditya. This is a very ancient holy spot. Though it suffered from the depredations of Hayavadana, a notorious rebel baron during the reign of Jayasimha in the early 12th century, the sacred spring here still flows.

When to go August–October; December–January for snow

Tip You can’t use a smartphone screen and must show a printed ticket to enter the airport.

Road Srinagar is on NH44, connected to Jammu via Udhampur, Patnitop, Banihal, Jawahar Tunnel and Avantipura. The highway is hilly, but well-maintained 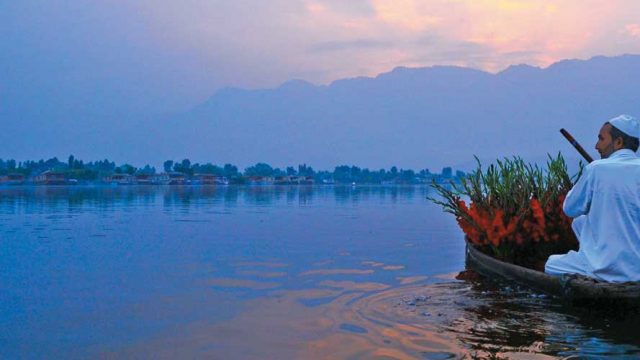 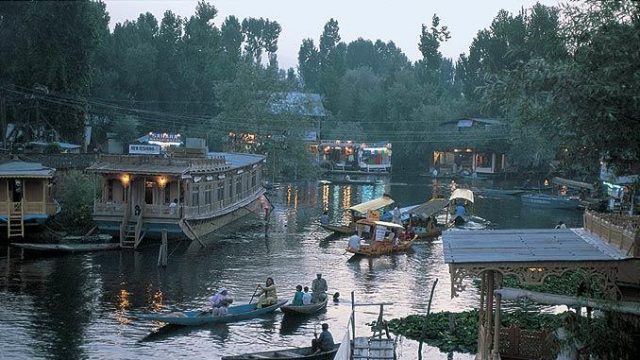 The houseboats on Srinagar’s Dal Lake are as beautiful as the latter, but the waters are troubled