The idea of a ‘luxury jungle lodge’ is one that is fervently disavowed by serious wildlife enthusiasts,

who deem seeking creature comforts whilst being in the lap of nature a cardinal sin. I must admit, I too largely subscribe to the same view. If past experiences were anything to go by, barring one exceptional stay in Pench, jungle lodges that lure you in with their luxurious trappings and eco-friendly gimmicks are masters at pretence, catering to frivolous tourists lacking the most basic sense of jungle ethics.

So as soon as I stepped out of my car and strode past the lofty wooden gates of Bamboo Forest Safari Lodge—Tadoba’s first boutique hotel—I straightaway went on to gauge the ‘seriousness’ of the lodge by a preliminary yardstick of my own, the library. To say I was mesmerised would be an understatement—I felt my hunger and travel-induced fatigue dissipate, and, for the next two minutes, I even contemplated skipping all my outdoor excursions into the jungle. The bibliophile in me was salivating at the prospect of spending hours with these bookish treasures and, dare I say it, leaving them a book or two poorer; but so impressed was I by their prodigious collection, that I ended up gifting them one instead.

The cottages at the Bamboo Forest Safari Lodge

Unsurprisingly, it was the library that almost single-handedly purged me of all my apprehensions when a book written by one of India’s most celebrated conservationists, ValmikThapar, opened with a handwritten message by the author, complimenting the lodge along with its exquisite décor. If the Bamboo Forest Safari Lodge had Valmik Thapar’s stamp of approval, then I could almost blindly rely on it to not swaddle me with unbridled luxury at the cost of the wilder side of things. And if that wasn’t enough, then the news of Bittu Sahgal—the brainchild behind India’s best-selling wildlife magazine—having paid the property a visit laid any lingering misgivings to rest.

I had to be prised away from the tantalising confines of the library to the spacious sprawl of the dining hall. But before my thoughts could gravitate towards lunch, a mural of jaw-dropping proportions and artistry caught my attention. So beguiling was this immense work of art that I stood in front of it spellbound for what must have been an entire minute before the clanking of plates drew me out of my stupor—lunch had been served.

A bowl of mushroom soup and a generous helping of pasta later, I lounged on my king-sized bed and, needless to say, slipped into a much-needed siesta. I woke, knowing that I’d missed the opportunity to go birding with Pranad, one of the lodge’s main guides and also assistant editor of Saevus, another well-known Indian wildlife magazine. While I had looked forward to the prospect of being guided by one of the best naturalists in the business, I hardly regretted missing a dose of avian action in the current circumstances. I had absolutely no regrets about having savoured the balmy embrace of my room instead.

Speaking of the room, while uncluttered, it was by no means minimalistic. In fact, so remarkably spacious was it, that the bathroom, consisting of an outdoor bathtub, could have passed off as a room in itself. Despite its palatial air, what really gripped the senses when you first stepped into the bathroom was the sheer brilliance of a front-facing mural of a tiger. A bathroom had never seemed so enticing!

My day ended with dinner being served under the stars on a lakeside gazebo. I was told that dinners are sometimes accompanied by langurs sending out their alarm calls, and a leopard’s paw print a few metres from where I sat testified to this. It wasn’t long before I was back in bed, ready to recharge my batteries for the early morning safari, during which I hoped for a chance meeting with Tadoba’s most famous resident, the tiger.

A slip of paper on my bed told me about the weather forecast and advised me to dress warmly. The morning safari yielded no tiger sightings, but we witnessed the even rarer sight of a pair of wild dogs, or dholes as they are commonly known, devouring a chital fawn as if it were a delicious chocolate bar, right before our prying eyes.

Sudeep Mehta, one of the owners of the lodge and a jungle enthusiast himself, had joined us on the safari. A chance to strike up a conversation with a fellow wildlife fanatic was not something I was going to give up. Our conversations ranged from modifying SUVs into personalised safari vehicles—like the sublimely comfortable one we were in—to ‘re-greening’ a barren patch of land with indigenous bamboo for the benefit of the region’s ecology.

Tourists on a jungle safari in Tadoba
Getty Images

The afternoon safari followed pretty much the same course, again without any feline encounters. Sapped of all my energy as a result of a chest infection, I headed straight to bed after returning empty-handed from the evening safari as well, and woke up late the next morning, just in time for a quick breakfast before making an exit. And yes, I had let down my feathered friends yet again by oversleeping.

I shot Sudeep one last query before bidding him, and the lodge, a reluctant goodbye. “Where have those peculiar, tiger-printed floor tiles come from?” I asked. “Bali,” came his reply. It was then that I realised that this was a lodge that hadn’t left a single stone—or tile—unturned in their efforts to imbue their guests with a deep-seated affection for the wild. 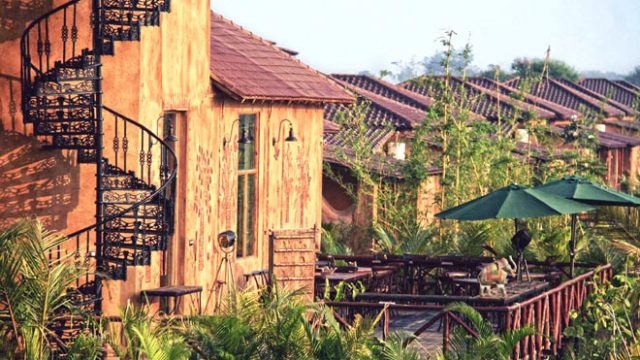