Meenketan Jha | July 30, 2018
A popular holiday destination during the winters and summers, the National
Parks in India close during the rainy season. Prohibiting visitors from coming, the aim is to protect animals who breed through the monsoon. Furthermore, the areas around and within the confines also become increasingly dangerous to venture into. But, should that stop you from visiting these areas? Well not really. There are still many other places around these parks that can be visited. to uplift to your rain-soaked spirits.
Jim Corbett National Park
Shutterstock

Corbett Waterfall is a treat to the eyes on your way to Ramnagar
India’s oldest National Park is closed during the monsoons as specific areas around the park become too dangerous with the oncoming of the showers. However, this shouldn’t stop you from making your way to areas surrounding it. If you do wish to visit the park during the heavy rains, the Jhirna zone is kept open. Jeep safaris are available in the mornings and will take you to the buffer area of the park the park, the Sitabani zone for a duration of three hours. 25km away from the city of Ramnagar lies the Corbett Waterfall, a gift from Mother Nature, where one can see as the water cascading down the rocks from a height of 60ft against the backdrop of a serene surrounding. Afterwards, you can take a drive to the Garjia Temple, located 14km from Ramnagar and the mid of river Kosi. Drive a little further and you’ll reach the Sitabani Forest Reserve where legend, if believed, is that Goddess Sita spent her days in exile here. The Sitabani Temple is also nearby and is where Goddess Sita is believed to have entered Mother Earth.
Kaziranga National Park
Shutterstock

The ruins of Deoparbat offer insight into Assamese culture
Declared a Tiger Reserve while also accommodating two-thirds of the world’s great one-horned rhinoceros, the Kaziranga National Park has always been a must-visit for wildlife lovers.  Despite the area being cordoned off due to the rain, the spaces around Kaziranga may spark a lot of interest. The Kakochang Waterfall is a popular attraction, flanked by coffee and rubber plantations offering a pleasant getaway. From here, one can observe the ruins of ancient Numaligarh as well as the tea gardens of Hathkhuli, Methoni, Difalu and Behora Borchapori. Close to the National park are the ruins of Deoparbat. Famous for archaeological ruins located at the top of the hill, the broken statues offer insight into the culture of the natives of Assam.
Ranthambore National Park
Shutterstock

A fort located near Ranthambore National Park
Another well-renowned location among animal admirers, the Ranthambore National Park is home to innumerable different species of animals—most of which are inaccessible during the rain. But, don’t get too disappointed. Ranthambore is a city of wonders and hosts several mind-boggling destinations. Start off by paying a visit to the Khandar Fort, which houses seven temples. One of those is a Jain temple composed of exquisite carvings of Jain gurus. Observe the structure and the location of the fort, which was thought to be impenetrable. Make your way to the Surwal lake next. Approximately 10km from the main city, this place is highly recommended if you are a fan of watching a beautiful sunrise. Reach before sunrise and pick a spot from where you can be awestruck by the blissful scenery that surrounds you as the sun wakes up from its deep slumber.
Kanha National Park
Shutterstock

The Narmada Udgam Temple is located at the banks of Narmada River
A three-hour drive from the Kanha National Park lies the pilgrim town of Amarkantak. The lush green of the town can be attributed to a diverse variety of medicinal plants. Take a diversion to the bank of the Narmada from where you can go across to the temples from medieval ages. The Pataleshwar Mahadev Temple and the Narmada Udgam Temple are popular spots and possess unique forms of architecture. Soothe your tired souls by observing the scenic locations of the temple. The Dudh Dhara Waterfall has to be next on your list. A place where Maharishi Durvasa meditated according to Hindu texts, this place is also where Mother Narmada gave the Prince of Rewa a divine vision in the form of a milk stream, resulting its present-day name.
Kaziranga Ranthambore Kanha National Park Jim Corbett India Things to do around national parks waterfalls adventure 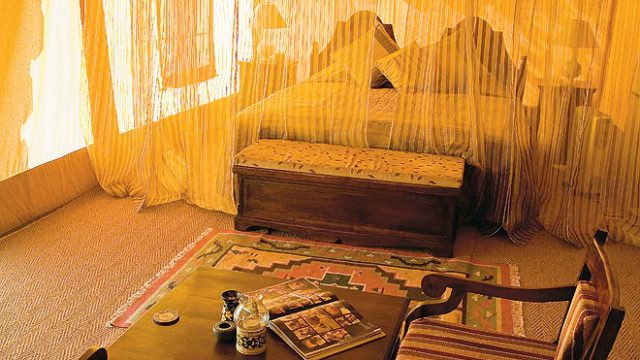 Places to celebrate the end of the year

Terrace rooms looking onto the lake, tented accommodation in a desert, a plush bungalow in a tea estate and more – pick one of these lovely Indian hotels for a year-end holiday