The Shekhawati region of Rajasthan is famed for its ornate havelis. One such is Alsisar Mahal, a

heritage building that’s now a heritage hotel. In mid-December, this mini-palace became the throbbing, pulsing venue for the Magnetic Fields Festival 2014 – a rather unusual choice, you may think, as the fest was celebrating the best of the international underground music scene, far removed from the colourful folk tunes of Rajasthan. But for that very reason, because of that contrast, the ambience was special.

Alsisar Mahal was once the residence of the Thakur of Alsisar, and in a way, he still lives there – we saw walls dotted with old family pictures, hunting equipment and antique paraphernalia. To accommodate the festival, two stages, north and south, had been set on the palace lawns, one for the day, one for the night. Festival-goers had the option of camping out under the sky in Bedouin tents (fully equipped with most modern amenities) located just outside the palace premises. Within the compound, a fairground atmosphere prevailed, with little kiosks selling jewellery, dresses and other interesting things. We got ourselves a glass of rum and cola from one of the two makeshift bars. Thus prepped for the mood, we headed to the north stage. Done up in chiffon flowing in the cool evening breeze, neon lights flashing, the stage looked like something from another world.

The festival featured rising talents from India like Begum and Soulspace and international legends such as bass music great Mala. Other acts included Weval, Dream Koala, DJ Vadim, Zahed Sultan, Nicholson, Sulk Station and Nischay Parekh. We caught Monica Dogra’s performance on the second day and it was an absolute delight. Swaying around the stage like a peacock, she left the audience craving more, much more.

Dream Koala, the Parisian dream pop sensation, had the crowd swinging to music that can be best described as ‘out of this world’. Mala, who closed the festival on the last day, treated the audience to music from different genres like reggae, jazz and drum ‘n’ bass, proving once more why he’s worshipped by bass music fans across the world.

During a break, we wandered off to the tented area, a two-minute walk from the palace. On the way, we entered a tent and guess what! There were a couple of people sitting in a circle with scores of books, old and new, scattered in the middle. I got lost there for quite a while. On our way back, we met wandering poets who made up haikus on the spot. The festival also had star-gazing workshops, and kite-flying sessions during sunrise. The music went on till dawn. Too bad we had to leave early. 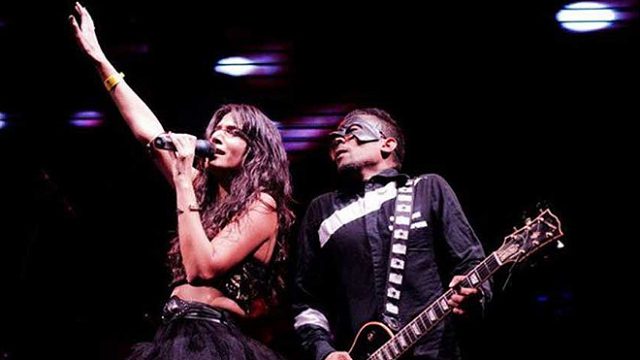