If you were interested in meeting the much calmer, more peaceful (and younger) cousin of Mahabaleshwar, you

would need to head to Panchgani, in Maharashtra’s Satara district. The name comes from its enviable location—nestled between five hills of the Sahyadri range with five surrounding villages giving it company. One of the best things about it, of course, is that you don’t have to exert yourself unduly to catch scenic views—turn any which way and there’s either a thick canopy of trees or a picturesque valley waiting to be photographed.

History has it that British superintendent John Chesson discovered and developed Panchgani into a summer getaway in the 1860s with the help of the Zoroastrian community. Residential educational institutions and sanatoriums supported by them had the hill station flourishing in no time. But migration to big cities and other countries over the years has left behind just a handful of Parsi families in Panchgani and Mahabaleshwar. Still, even now, a weekend spent sampling Parsi hospitality and cuisine in Panchgani is a weekend well-spent. I’m usually quite uncaring about what’s served on the dining table but the homestays I visited made me sit up and take notice of every dish that was laid out. Mind you, there was no fancy plating: just simple, authentic fare.

A cosy nook at Hotel Prospect in Panchgani

The Javanmardis are the family that runs one of the most popular homestays in Panchgani—Hotel Prospect is, in fact, the very first hotel built in Panchgani, back in 1912 by a gentleman named Satarawala. It’s set at one of the highest points in Panchgani, just below the famed Table Land (a pathway still connects the hotel with Asia’s second longest mountain plateau, but has now been closed to the public for security reasons). Later, in the early 1960s, Merwan Javanmardi took it over and his family has cared for ol’ Prospect ever since. Though the Javanmardis opted for the Baha’i faith at some point in time, Prospect is every bit as Parsi in its heritage as we can imagine. The décor, food and just about everything is so warm and welcoming! What caught my attention most was the abundance of rich flora over their four acres—there’s silver oak (not a native plant but introduced by the British), jackfruit, avocado, mulberry, grapefruit, jamun and even a rubber tree. Now imagine waking up to an exuberant choir by the feathered population living atop them—and every cottage opens up to such greenery. Most of Prospect remains as it was when it was first built, except for the addition of facilities like a swimming pool. I was particularly taken by the handle of the door to the games room—a metal leaf. So appropriate for the setting. And if you ever wish to grab a classic and relax on the swing with a cup of hot tea, the gracious staff will gladly oblige—just pick up a book from any of the collections placed at different locations in the hotel.

Carefully displayed memorabilia in the cottage that serves as the reception includes a kerosene-run iron box and a tiffin carrier that was used to deliver food. Then there’s the copy of a magazine called Tit Bits, dated 21 May, 1960, and a lodging bill from 12 November, 1958. Prospect was the first to get a telephone in Panchgani and its then telephone number, just ‘9’, is proudly exhibited on another bill. The adjoining dining area was previously a ballroom where snacks were served.

As with all the Parsi homestays of Panchgani, a package here is inclusive of pre-set vegetarian or non-vegetarian meals—breakfast, lunch, high tea and dinner. Food is strictly prepared fresh at all times, right from the appetisers to the dessert. Oh, the food! Be it the chicken farcha or the fish croquettes, or the wildly popular dhansak, just tuck in blindly for the most authentic flavours. Sum it up with generous helpings of caramel custard and there you have it—a meal worth every relished spoonful.

In comparison, Hotel Mount View presents a rather modest appearance. The rooms here are simply done, and kept neat. It too has retained its old-world charm and, pleasantly, it works. The hotel’s charming woody surrounds offer views of the Krishna river valley below, nestled between mighty mountains.

Dhanjishah Khambata took this hotel on lease in 1923 and the fourth generation cares for it now. The family supervises the kitchen keenly and there’s no compromise on taste. Even the ice cream is homemade. Do give their Parsi pulao a go with the sali boti. Parsi food tends to the sweetish side, with just a hint of sourness. So every dish can be savoured without having to rush for a glass of water. For a first-timer like me, a fusion preparation of the ivy gourd with boiled pieces of chicken turned out to be a delight. It was like two eclectic ingredients making complete sense when put together.

These old hotels of Panchgani offer tons of solitude and Mount View Heritage is no exception. Once again, I could see throwbacks to a long-gone era—the prayer room that’s now converted into a family room, the old flooring, and a grandfather clock going tick-tock as the only reminder of time in this beautiful setting.

Tranquillity acquires an entirely new level of meaning at Il Palazzo, just round the corner from Prospect. This property dates to 1925 and has been run by the Davierwalla family since 1933. The neatly manicured lawns are carefully interrupted with roses, carnations and hibiscuses. Silver oaks and eucalyptus trees mark their presence here as well. A meditative Buddha statue under a large banyan tree set the tone for my evening.

I found Il Palazzo an interesting mix of the old and the new, part-hotel and part-homestay. There’s colonial architecture (teak wood bed frames and almirahs) and there’s a basketball court, a swimming pool, a gym and a play area for kids (safe enough to require only minimal supervision). The high ceilings make the rooms feel very spacious, and the bathrooms with walk-in wardrobes are impressive in their size and layout. What I found most exceptional about these homestays is the personal attention lavished on guests by the owners, who make every effort to forge a bond of comfort.

Il Palazzo has had its share of high-profile guests—from the British Deputy High Commissioner who visited them sometime in the 1980s to Aamir Khan’s wedding reception a couple of years ago. There’s live Hindi music on Saturday nights (English ditties, sometimes, on Fridays), which sets the mood for the meal that follows.

Home-style cooking takes the centrestage here as well. The distinct yet consistently good flavours have earned Il Palazzo a considerable name over the years. Along with Parsi cuisine, they have a repertoire of Continental and Oriental dishes as well. Personally, I couldn’t have enough of their sali (potato) and eeda (egg) dishes. Don’t miss the kheema pav and the patra ni macchi. Finally, end the meal with the creamy, indulgent lagan nu custard. It is bliss.

Getting There
Pune’s airport is 100km away (₹3,000 by cab, good roads); Mumbai is farther off at 270km (₹5,500). There are buses to Panchgani from all major cities in Maharashtra, and to Mahabaleshwar (just 17km away). Chiplun (26km) is the nearest railway station; an excellent reason to use this as your hub is that it’s on the scenic Konkan Railway route.

A view of woody Panchgani

Where To Stay
Unlike Mahabaleshwar, which receives torrential rains, Panchgani has a manageable monsoon, so hotels here are open throughout the year. The corollary to this: it’s best to reserve accommodation well in advance, especially for weekend trips. Rates can change over public holidays, weekends and during the peak seasons.

The tranquil outdoors of Hotel Prospect (from ₹4,250 plus taxes per person for double occupancy, inclusive of bed tea, breakfast, lunch, high tea and dinner; prospect-hotel.com) will not distract you from the delectable food and warm service. Hotel Il Palazzo (from ₹3,500 per person for double occupancy, inclusive of taxes and all meals; ilpalazzo.com) has lovely rooms and plenty of activities to try out. Hotel Mount View (from Rs 1,900 per couple inclusive of breakfast and taxes, plus all meals during mid and peak season; hotelmountview.co.in) has soothing river views and greenery all around.

Where To Eat
Eateries around the hill town turn Panchgani’s luscious harvest of berries (raspberries, mulberries, strawberries) into ice creams and milkshakes, or just serve them up as pieces of sweetish-tangy fruit topped with fresh cream (Hilltop Ice Cream is a local legend for its fine quality). The Gujarati thalis of Purohit Lunch Home are well-known. Lucky Restaurant has yummy Irani fare and baked goodies. Most of these places are found easily at the Main Market, near the Shivaji Maharaj statue.

Tourists enjoy views of the Krishna River from Parsi Point

What To See & Do
Ride a horse on the Table Land to catch stunning views of the Sahyadri range, and see ancient caves. Shop for jelly candy, fresh berries and honey at the market. Paraglide (from January to March), trek, or cycle a rented bike. Walk to build up an appetite for all the delicious food waiting back at your hotel, and slip in an appetising strawberry with cream along the way. 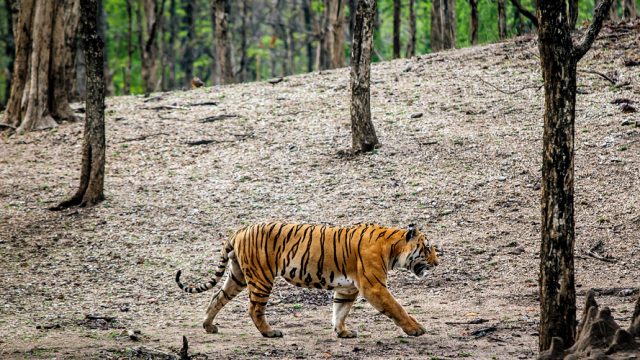