Our senses may be highly developed, but they can always profit from a bit of guidance. As

I began a trail near Mukteshwar, I could hear the shrill chirping of birds and the distant burbling of water, see towering trees with needle-like leaves and upward-pointing branches, and scent a familiar sweet fragrance. After a brief conversation with a knowledgeable local, I knew that the call was of a Himalayan bulbul, the babbling of the Bhalu Gaad waterfall, the trees chir pine, and the fragrance, of course, the rhododendron that bloomed bright crimson in spring.

My companion was Nishant Singh, who owned a seven-room boutique homestay, The Birdcage, in Shasbani village near Mukteshwar town. At first glance a luxury hill resort, The Birdcage “may be built like a hotel, but it has the soul of a homestay”, Nishant insisted. When I saw him interact joyfully with his guests and go to great lengths for their comfort, I understood what he meant.

Since starting The Birdcage in May 2017, Nishant has discovered plenty of easy trails around Mukteshwar. These crisscrossing paths through tiny villages, hilltop temples, terraces, and plum, apricot and peach orchards present splendid views of slopes and dales. Rather than recommending the usual attractions, he promotes these excursions. Comfort is the keyword at his place, and these brief jaunts are no different. More so, they best represent unpretentious Mukteshwar, a far cry from places like Nainital, where tourists are packed like sardines. There’s little to do here except savour the biodiversity-rich hills.

This bounty of nature reaches its crescendo at Bhalu Gaad waterfall, a 750-metre trail from the main road. What began with a slight ascent soon went downhill—literally, of course—along a slate pathway flanked by towering pines. I noticed movement in one of the maple trees, and two striated swallows emerged, flying away together. Along the descent, sal, kaphal (box myrtle) and oak trees nested different species of feathered friends. I could sense the drama heighten—which continued till I was down in the basin, skipping across slab-like rocks. Bhalu Gaad is neatly tucked in a beautiful opening. The waterfall itself isn’t overwhelming, but the rock formation, the abundance of birds—tits, sparrows and even a pretty redstart—and the palette of the plunge pool, turquoise closest to my feet and deep blue further away, transported me to a tropical paradise.

Back at The Birdcage, another spectacle was unfolding. Nanda Kot, Laspadhura, Danghtal and the five majestic Panchachuli peaks (between 19,000 and 23,000 ft) were in view with unabashed clarity. Moreover, at other vantage points a little off The Birdcage, the two-peaked Nanda Devi and the three-peaked Trisul were visible. Nishant told me March usually makes no promises of such views.

The Birdcage’s owner used to run the iconic Drifters’ Inn & Café in Old Manali, which he opened in 2009 after quitting a corporate job and moving to the hills. The place soon became known as a comfortable lodging that served excellent food. By 2012, when the hill station was falling prey to the tourist rush, Nishant started looking out. Mukteshwar caught his eye.

Thus began The Birdcage chapter. It is built on a hillside that used to be an orchard overlooking the mountains. A part of it remains as an organic kitchen garden, which grows fruits, vegetables and herbs. Orchards attract plenty of birds, which gave The Birdcage its name. Nishant had luxurious European alpine homes in mind while working on the homestay. He aimed to provide top-notch facilities, and even appointed an architect practising sustainable techniques to help retain the maximum natural landscape and take the best advantage of sunlight and views.

My day was picture-perfect: I enjoyed an eggs Benedict (the hollandaise sauce was delectable)at a table beside flowerbeds; rigorously practised sunbathing (the loungers helped); put the red rocking chairs lying in the private garden of Plum, the name of my room, to great use; enjoyed a game of Jenga in the restaurant in the evening while Melody Gardot’s ‘Baby I’m a fool’ played in the background; and admired the star-studded night sky from the skylight right over my bed as I snuggled into my heated mattress.

One of the seven pretty rooms
Puneet K. Paliwal

I spent the next morning loitering around the homestay. The (not overly) manicured gardens connected the grey-and-red cottages, each with its own sit-out. The restaurant had impressive woodwork, with intimate sitting areas and hill-facing outdoor seating. The charm lay in the details: the rooms, named after local fruits or flowers, had wall décor made out of the fallen branches of the corresponding trees.

If there is one aspect of hospitality The Birdcage has mastered, it is food. Rarely do I find places where I enjoy every single dish. Over the meals, continental fare prevailed—the duxelles-stuffed chicken breast (served with fresh pepper sauce) was mild, which made its juiciness all the more noticeable. The minced lamb burger was better than many I’ve had in Delhi. But what really got my attention were the lamb meatballs (in red wine and tomato sauce) and the spinach ravioli in tomato sauce. Among the Indian dishes, the Kumaoni chicken curry had pleasant restaurant finesse.

After one of these satisfying meals, a walk is exactly what you need. One day, I went for a short hike around Shasbani, where I was greeted by cheery villagers watering their potato saplings. Another day, I took a longer three-hour walk to nearby Gehna village. The first part of the trail was relatively forested. Here, birding proved tricky, although I did spot a babbler and my favourite find in all of Mukteshwar—a minivet, glowing scarlet in the sun. Later, we crossed Kumaoni homes where children greeted us from the windows. As we reached a hilltop, I stopped for a break. The wind was calming, the view breathtaking. I felt a sudden pang of hunger; after all, I had walked for three hours.

After one of these satisfying walks, a meal is exactly what you need.

Getting There
Leti Bunga in Shasbani villageis located approx. 5km before Mukteshwar in Uttarakhand. It is a 320km/8hrs drive from Delhi. Route: Kaladhungi–Nainital–Bhowali–Gagar–Ramgarh–Satbunga till you reach the nearby Bhatelia market. As for flights, there’s one Air India direct flight from Delhi to Pantnagar Airport. From here, take a taxi (95km/3hrs, ₹3,000 one way). By train, the New Delhi–Kathgodam Shatabdi Express (12040) is the most convenient option. Leti Bunga is 60km/2hrs taxi ride (₹2,500 one way) from Kathgodam.

What to Eat
The Birdcage does not have a buffet system, nor does it serve food in the rooms. Guests order and eat at the restaurant from a fixed menu.

Mukteshwar has a bunch of attractions such as Mukteshwar Dham temple (the well-known 350-year-old Shiva Temple from which the town got its name) and Chauli ki Jaali (a dramatic rock face known for rappelling and rock climbing).

Ask Nishant to guide you on the Bhalu Gaad waterfall trail, the Gehna village walk and the Shasbani village walk. He can also suggest some nice vantage points to enjoy the peaks. At The Birdcage, you can enjoy the following:

∗A romantic celebration dinner (₹5,500 for a couple) with a five-course meal, a private open space decorated with fairy lights, and a bottle of cabernet shiraz. 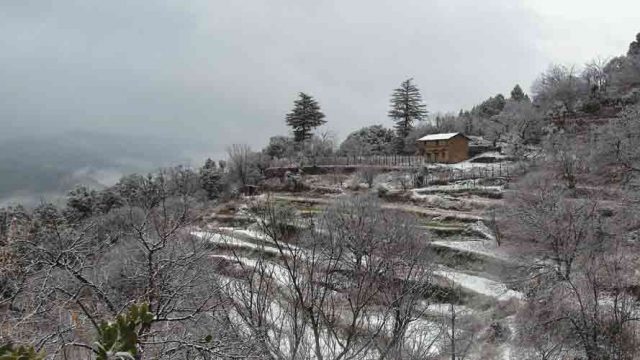 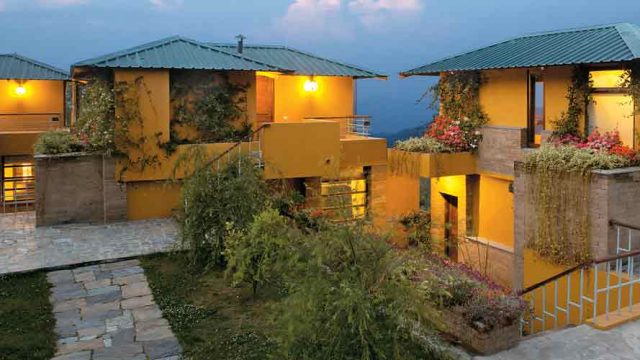 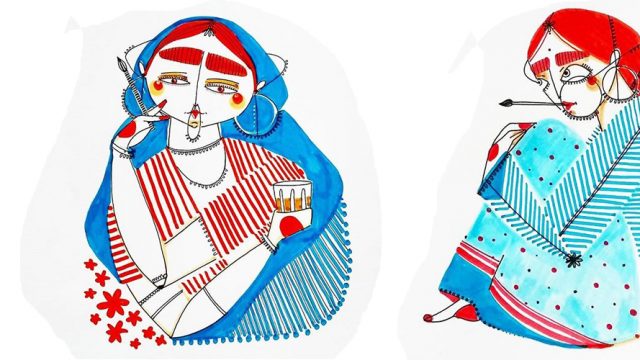