If a wildlife enthusiast dies and goes to heaven, she would find herself

in Kruger National Park, South Africa. The park is justly renowned for the sheer magnificence of its landscape and the prodigious diversity of its animal, bird and plant life. I was in Johannesburg for a workshop and there was a lot to see and do in that city — the new Constitutional Court built on the site of the notorious Fort Prison complex and the township of Soweto being two major shrines for visitors paying their respects to a vibrant post-apartheid society. But Kruger beckoned. So I took the short flight out to Nelspruit and, an hour-long taxi ride later, was on safari in the bushveld.

I went on hikes at dawn with armed rangers and bird-watched on my own around my rustic thatched-roof bungalow at Berg-en-Dal camp (this version of ‘rustic’ included a fully equipped kitchen, running hot water and air-conditioning). But the classic safari trip has to be done in a jeep, bowling along dirt tracks in search of megafauna. While animals get uneasy when they see humans, they don’t mind motor vehicles because they appear like large harmless animals. Or so the guides tell us tourists. And if one’s project is to see Kruger’s Big Five: the lion, elephant, Cape buffalo, cheetah and rhino in the space of a single day, the safari ride is highly recommended.

I made sure to arrive early at our pick-up spot and got the best front seat in the open-air van. The driver John Mahumane doubled up as our guide. The van filled up and by five o’clock we were off through the rolling expanse of 20,000 sq km of grassland and scrub forest. First off, a warthog! It stood stumpily by the roadside, endearingly ugly with its short tusks curving around its snout. The sky was overcast and the air cool; it felt like it might rain. I was a bit anxious that we wouldn’t see much in the dimmer light, but the warthog was a good omen. We soon spotted a male giraffe munching leaves close by. Tiny red-billed oxpeckers hopped up and down its body, pecking at insects and mites, a crew of personal attendants doing a very thorough grooming job. A herd of about 40 impala grazed a little further, their skin a gorgeous golden, hind quarters and ears crisply marked in black, elegant spiralled horns and impossibly slender legs. Some looked up at us and sprang vertically into the air before leaping away with balletic grace. Lovely. A flock of helmeted guinea fowl with bizarre blue and yellow heads scuttled into the roadside brush, eager to get under cover and out of our sight.

We drove a longish stretch without anything exciting coming into view. I kept my eyes peeled but there was nothing, just green scrub forest speeding past. All except the glimpse of a white rhinoceros which, given the distance and intervening vegetation, could just as easily have been a bhains. There hadn’t been an ooh moment for a while, so John got onto his radio and consulted with other jeep drivers. Soon enough, we reversed and raced off in a different direction, gliding to a halt near a giant marula tree. And there, sprawled out in plain view on a low branch, was a large male leopard. His sleekly muscled body oozed power. He raised his head to give us a look of bored disdain, and then rested it on his paws to doze, tail hanging languidly. Wonderful.

We were doubly lucky. Heading back after our fill of admiring gazes and photography, we came across another leopard, similarly stretched out on the low branch of another marula tree! It was smaller and more intent on keeping an eye on the herd of impala grazing further away. Daylight was fading and when John shone a bright spotlight on the leopard, its eyes gleamed red. As we drove on through the darkness, another rich vein came into view. Countless nightjars were abroad, sitting on the roads because the warmer air there attracts insects that get snared in their whiskers (our guide was very knowledgeable). Many lapwing-like spotted dikkop (a.k.a. thick-knees — nice name isn’t it?) took off in startled flight at our approach. We saw three scrub hares, poor pink-eared things desperately hopping to get away from the onrushing lights and sounds of the van. In a nice symmetry, we also saw a tortoise going plod-plod along the road.

Then John slowly braked to a standstill. Ahead of us, right on the road, were six spotted hyenas. We cruised right up to them and they were totally unafraid, walking around to inspect the van and sniff at its tyres, before losing interest and going back to loll about before the start of their busy night. They were so close we could have reached out and petted them. But somehow, the idea of petting a hyena didn’t appeal. Then the hyenas pricked up their ears and turned their heads in unison. We followed suit and I couldn’t help exclaiming: zebra crossing! It must have been the oldest joke around here but there they were: two zebras walking across a black tarred road. Their compact muscular bodies gleamed till they trotted off and melted into the by-now dark bush. Time for us to head home too.

It was humidly hot the next evening when I again cornered the best seat. Raymond, our guide and driver, seemed a bit rough around the edges. He was as well-informed as all the other South African National Park guides I’d met, but his delivery was a bit mechanical, as if he had mugged up all the facts. Press a button and info came rattling out: “The female elephant is the matriarch of the group while young males form bachelor parties…” or “The male white rhinoceros can weigh up to three tons; while the white rhino eats only grass, the black rhino eats grass and leaves…” (perhaps it’s the other way around, I’ve forgotten). But maybe Raymond wasn’t as relaxed as the rest because we had an irritating American in our group, a large pink man who loudly announced that he had already seen four of the Big Five since morning, including a pride of 20 lions on the Skukuza road (I squirmed with envy). He now needed a rhino to round off his tally. “Show us a rhino,” he urged. “I can’t promise to show anything,” said Raymond, “we will see what we will see.” “Positive thinking,” boomed the American, “You must have good attitude!” If I had been Raymond, I would have done my best to make sure we didn’t get anywhere near a rhino. But as it turned out, the bloody man’s luck was good. Within 15 minutes, we saw a white rhino hulking close to the road. The American was loud in his triumph but luckily for us, with the Big Five knocked off his list, he lost interest, sat back and shut up for the rest of the drive.

I, meanwhile, gave up on lions (which, in any case, I was too well-behaved to request of our guide) and consoled myself by spotting a juvenile martial eagle, Africa’s biggest bird of prey that’s been known to carry off even a 37-kilo duiker. We saw elephants, more warthog and giraffe. By now the air was cooler with a breeze building up. Blue-grey thunderclouds massed to the south. It looked like the sugarcane fields and the Drakensberg mountains visible in the distance were being rained on. The vast sky was jagged by occasional lightning. Though the storm headed our way, we were surrounded by a soft light that limned everything in gold. But the birds were preparing for the storm — European rollers, white-fronted bee-eaters, and red-backed shrikes had left their various perches to dash about. Swainson’s spurfowl and crested spurfowl were on the move, while parties of helmeted guinea-fowl with chicks in tow bobbed anxiously into cover. As we drove through this gold-drenched landscape, a gigantic rhino came into view. Gleaming wet with mud, and looking rather like a dark potbellied man emerging from a bath, it lumbered across the road and disappeared. Then the rain came pelting down. Raymond announced that he was cutting short the drive and we headed back.

It soon began to pour, and though the van had a sun awning overhead, it was open from the front and sides, and we were soaked within minutes. The wind and rain hit us with full force as Raymond drove determinedly on. I was anxious about my binoculars, camera and bird book. I’d tucked my binocs under my jacket, the camera was in my bag, and I was sitting on the bird book. I had no idea how waterproof any of these objects were. It was still pouring as I squelched my way in the dark to the bungalow. A hot water shower, wrung dry all my clothes, found camera and binocs fine. But the poor bird book was a sodden mess. Now I know: my bag is 100% waterproof, my jacket ‘water-resistant’, and my bum no protection at all! The storm on the veld brought home the drama of nature in its own vivid way. Though I never did see lions on my visit, would I do the drive again? Like a shot!

Getting there
By air: It’s easiest to first fly to Johannesburg. South African Airlines flies direct from Mumbai for Rs 42,000. Emirates flies from Mumbai, via Dubai. From Johannesburg, there are flights to all three of the airports located around Kruger National Park.
By road: You could also get into Jo’burg, rent a car at the airport and drive to the Park (this can be cheaper than flying). The Park has nine entrance gates, most a comfortable 5-6 hours drive from Johannesburg.

Where to stay
For those on a budget, the Main Kruger Park Rest Camps offer a choice of campsites, cottages and guesthouses. The rest camps have restaurants, shops selling basic supplies, ATMs, chemists and the like. Bush Lodges and Camps offer greater exclusivity and privacy. Bookings for all of these can be done at www.krugerpark.co.za.
High-end accommodation is also abundant. Among the most expensive is Tinga Private Game Lodge (0861-505-050, www.tinga.co.za), where a double in a villa with private lounge and plunge pool are available. There are also smart homestay-style options, such as at the Buhala Country House (013-792-4372, www.buhala.co.za) and River House (013-790-1333).

Wildlife sightings
Although you can drive around the Park on your own, it’s recommended that you take at least one guided tour. These tours are allowed on roads that the public isn’t and are accompanied by knowledgeable guides. A variety of tours are on offer at www.krugerpark.co.za. 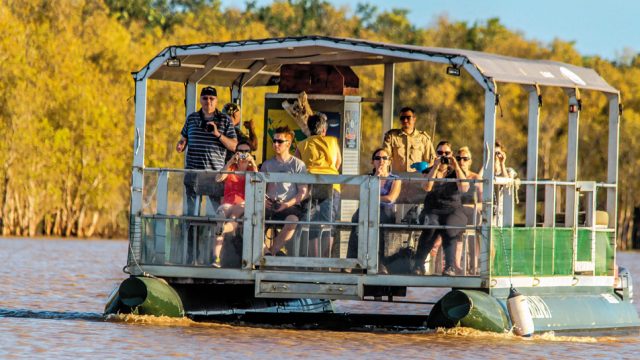 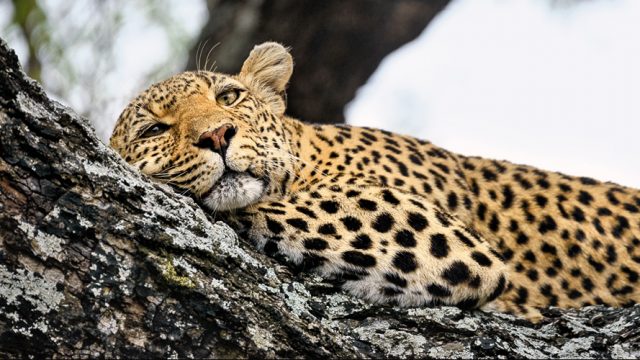 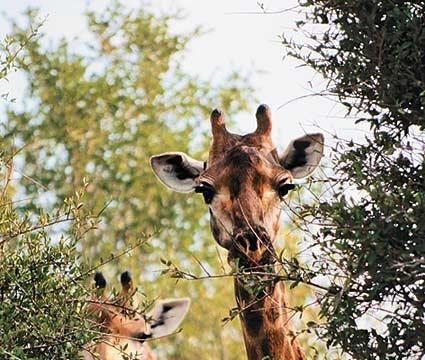 A matter of pride

The South African veldt for lions at the Kruger National Park