With an emphasis on fresh, seasonal ingredients, this superla- tive Japanese restaurant tucked away in a

sleepy Delhi market has been regaling diners for several seasons now. It used to be called Guppy by Ai, being the casual, less-uppity version of restaurateur A.D. Singh’s Ai. Now that there’s no Ai, it’s just good ol’ Guppy. In fact, its own offshoot, Hello Guppy, just sprouted in Mumbai. Behind the playful vibe and quirky décor, they’re dead serious about the food.

We caught the fag end of the Hanami menu, which Guppy launches annually to celebrate Japan’s cherry blossom season. Luckily, the most popular dishes nd their way into the summer menu. Think of it as a testing menu (we’re happy to report that Guppy passed with flying colours). Actually, no praise is enough: chefs Vikram Khatri and Saurabh Sharan have highly evolved palates, and the magic fingers to ensure that the cuisine is not lost in translation.

While Nishant, the affable manager, fussed over us, chef Sharan was at hand to enlighten. They source their ingredients as locally as possible, serve an impressive number of vegan dishes and generally keep things healthy.

An animated discussion on the merits of Delhi’s various pork suppliers was interrupted by the arrival of the mango tuna sushi roll (available till the mangoes are in season). The king of fruits provided a nice contrast to the spiciness  of the Sriracha sauce and the crunch of concealed sesame seeds. Refreshing appetisers like ceviche dressed vegetables and crisp calamari tempura followed. Most of the dishes were cold, with a generous use of fresh greens—just what Dr Summer ordered.

And no Indian summer is complete without its coolers. Guppy’s summer menu has several impressive entrants. But perhaps our reception of the Lemon Ninja, a subtle gin and grapefruit cocktail that relies on basil for its aroma, was a tad frosty, so the ever-eager- to-please Nishant-san rustled up Tokyo Dawn, which arrived in a mist reminiscent of Mount Fuji. If that wasn’t Japanese enough, its colours mirrored those of the sakura blossom. Made with soju and pomegranate juice, it was uplifted by the use of kafir lime leaves.

Even as we were making our way up culinary Mount Fuji, chef Sharan was launching a tsunami of dishes from the kitchen. The sweetly punishing regimen continued with veg harumaki, a baked spring roll that tasted uncannily like a veg patty (a fact that promptly enamoured me to it) and the hi- yashi tanuki cha soba, chilled green tea-flavoured soba noodles, topped with tempura fritters and served with a soothing soy-flavoured dashi broth. The braised kabayaki eel was, quite simply, off the charts. We were told we couldn’t possibly leave without dipping into the (extensive) main menu, so we had their legendary pork belly. The Nashi pear flan looked too good to eat but, of course, that did not deter us. We’re eyeing their impressive collection of sakes now. A sake tasting next time, perhaps? 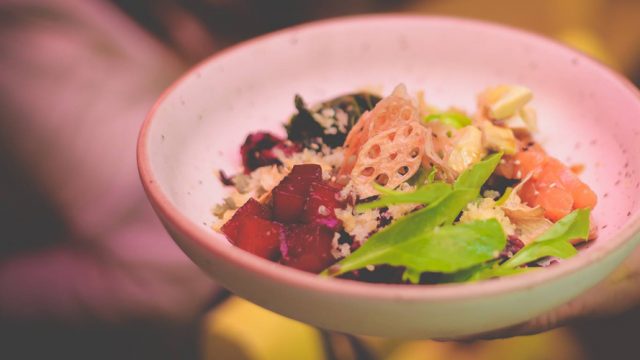 The Poke Bar in Lodhi Colony serves a comforting bowl of healthy goodness with delicious signature cocktails, all in a whimsical space in the heart of south Delhi