I first fell in love with Maharashtra’s Sahyadri mountain range when we visited in June last year.

The monsoon was just round the corner. The arid hills shimmered splendidly underneath the dark, cloudy sky, as we drove along the winding roads. Before this, we had seen beauty in the lush; this was beauty in the dry.

We next visited these mountains in February this year, when the rainy season was last year’s memory. This time, we stood by two bicycles parked atop a golden-brown hill. The sky was blue, the hills still shimmered. Oddly, a château shone somewhere in the distance. That too was beauty in the dry.

A glass of white wine and a sprawling château
Puneet K. Paliwal

In the afternoon, we had bicycled from the rear entrance of the château across yellow grass-strewn meadows. The next morning, we took a walk there and spotted plenty of deer. Others had even seen foxes and wild boar. But all said and done, what business did a French-style manor have being located at a place like this? Plenty, it turned out—it was, after all, home to the Four Seasons Winery. A part of United Spirits Limited, itself a part of one of the world’s largest distiller of spirits, Diageo Group, the winery produces 11 labels. It also has vineyards lined within its nearly50-acre complex and is modelled on a French château that doubles up as a resort.

When we arrived here on a Monday morning we were awestruck by the grand complex located near Baramati town. A road led right up to the manor, though interrupted by a series of small fountains and a sprawling large one.

It was only fitting that a place like this is supervised by Abhay Kewadkar, one of India’s first winemakers and chief winemaker here. His CV lists Chateau Indage, Champagne India Limited and Barton & Guestier—all prominent names in the world of wine. But once we sat with him for a meal, and then a few more, we discovered a personality that matched his accolades. Through the narrative of his curated food-wine pairings, we learned more about wine than we had ever done before.

Our first dinner with him was at the restaurant. We sat on the balcony, overlooking the fountains and vineyards, and were presented with a continental spread. First was a salad with broccoli, capsicum and cheese, paired with an off-dry (minimally sweet) Four Seasons Chenin Blanc, followed by a fish rava fry paired with a Rosé. The grilled chicken entrée was paired with the Barrique Reserve Cabernet Sauvignon, a red wine that had spent a year and a half ageing in a French oak barrel and two years in a bottle, before being uncorked at our table. For each of these pairings, the purpose was to achieve a balance that food or wine alone could not. As Kewadkar put it, “Food and wine must both taste good in isolation for them to taste good as pairings.” Other good advice: “Pairing is a subjective experience”; and “Keep the taste simple”.

The next two meals were spent pairing wine with two diametrically contrasting cuisines—Maharashtrian and barbecue. The former began with kothimbir vadi  (coriander fritters with chickpea flour batter) paired with a Sauvignon Blanc. The wine helped keep the mouth hydrated, since the texture of the snack was dry. Then we were served Jhunka, a pulao-esque dish made of gram flour and onion, and Kolhapuri sukha mutton. Kewadkar paired these with a Shiraz red, which he felt would help neutralise the spicy flavour.

Vintner’s Reserve, which was paired with the barbecue
Puneet K. Paliwal

At night, we were at the poolside party deck, which is a landscaped courtyard with a well-sized pool, a jacuzzi and enough space to host 250 people. Here we enjoyed our barbecue, where some of my personal favourite dishes—paneer tikka, chicken leg and butter garlic grilled fish—were paired with Four Seasons Vintner’s Reserve Cabernet-Shiraz, a red wine made of two grape varieties. The charcoal of the barbecue went well with the wine’s oak-infused smoky flavour.

For breakfast, do request the management to lay a table up on the central tower’s balcony, accessed by a lift to the third floor, from where you can enjoy a windy view of the horizon.

The château’s high-capacity winery is equipped with fermentation halls that can store 1.5 million litres of wine, sophisticated wine-making machines, storage space and a traditional barrel room filled with rows of French oak barrels.

Wine fresh out of the tank was the best part of our showaround
Puneet K. Paliwal

We walked down a level to find a dungeon-like corridor. The fermentation tanks were located in a room to the right. Do ask for a glass of white wine here. They serve it fresh from one of the gargantuan, stainless-steel tanks. There was a room for structured wine tasting nearby, where one could understand the four S’s of wine drinking (seeing, swirling, smelling and sipping). In one room is a high-tech bottling plant, where machines work faster than the eye can follow, and in another the crushing hall (although a lot of other processes take place there too). The winery is a nice blend of the old and the new—the barrel room would not have been out of place at a medieval castle.

But in the end it is grandeur and space that are the Four Seasons Winery’s biggest selling points. Be it a conference room that can seat 50, or 2.25 acres of lawn, or vehicle parking for hundreds of cars, a helipad or a place to host big celebrations. But, for us, it was also the oddball location that stood out. Twice we stepped out from the back gate and into the wilderness. Thankfully during each of these escapades, the Four Seasons Winery was there to lure us back with the prospect of a glass of wine.

The Chateau: The château has 10 regular rooms and four suites. (from ₹7,040). Room tariff includes accommodation, all meals, structured wine tasting session, mountain biking, access to the party deck, swimming pool, library, the vineyards, winery and all other areas in the complex. Day visits are possible too.

Guidelines & Tips: Wine tours: minimum two people. The Four Seasons Winery is open 10am to 4pm, Monday to Saturday. A great time to travel is February to March (the harvest season). 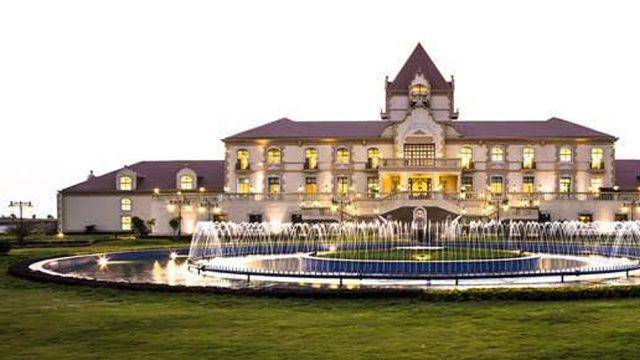 Maharashtra: Indulge at the Four Seasons