More from Sakoon Singh
View All

They went back to the club to pick up the bike. Through a clearing, they stepped into a wild grove at the back of the club deck. You could not suspect from the outside, what full forests those depths enclosed. He put a finger on his lips and with a movement of his hand, asked her to come along. One minute you are in a manicured garden, sipping tea and the other, you are discovering a cavernous fantasy. He cut through veined walls of thick creepers — innocuous barriers that could be knocked down with a swipe of a hand. He kept moving into the distance and cutting through the tangle till he came to a small clear patch, which nevertheless, was surrounded with branches and glistening leaves, and whispered “Now listen.”

She stood there expectantly, her ears primed. And then, it rose. Somewhere from inside the thicket emanated a chorus of chirping birds coming home to roost. The excitement was palpable. A raucous rush of cheeping and chirping, wee bit loud for those tiny frames, combined with a lusty flapping of sinewy wings, repeatedly hitting the breasts. A while elapsed before the winged family settled into the rhythm of their spare hours and let out an elaborate chorus. Now from behind that bush, now from the branch over there. Alternately loud and hushed.

Himmat faced the thicket, taut and alert, tuning in to the song with his mouth slightly open. When the song reached a crescendo, he looked at Nanaki, like you anticipate a reaction when you offer somebody the contents of your secret treasure chest. She looked at him wide-eyed, gasping.
They had to start back soon. They were already way behind schedule. Sitting silently on the rear of his bike, she threw back her head, letting the wind run through her hair. It was twilight and she could see the mountains turn into dark indistinct shapes, which together with the spark of lights from a distance, looked strangely mystical. She moved closer to Himmat at this point and instinctively put her arm around his waist. For an instant he released his hand from the bike to touch her arm and put it more firmly in place. She bent forward, resting her whole body on the curve of his back. She could feel his rising and falling breath. The dark of the twilight closed on to their gliding silhouettes.

The next morning she got up to an overcast sky. Thoughts of Himmat had constantly hovered on her mind since last night. It was a vague delightful expectation that hung there all day. Love was slowing her down. She was constantly distracted, her mind vacillating between the rainy evening at the deserted college, when they were still strangers but a sense of common courtesy had ensured they held cups of sugary college tea and make polite conversation while watching the rain lash about them. It had come down in swirls, inundating the college grounds.

Then the sight of him framed in the art gallery that she had quietly spotted from a distance and observed for long. And how she had secretly observed him from the pillion. She had been undeniably pulled to him, and the realisation had become singularly clear in the mountains. His ears keen to hear the birds and turning to her for a validation of his desire. There was a flash of recognition in their eyes — the two locked in their own private universe. In this space silence had sealed a bond. Like they were spun off into an alternate space and time. A new dimension. A story of love.

And when she found herself constantly thinking of Himmat, the world-weary look on his face, his lean frame, her heart would skip and somersault, traverse a neat circle and take a leap igniting a tremble. What was this? She could not pin point except she felt luminous, as if someone had placed a diva, an earthen lamp in the deepest alcove of her heart and it was now letting out beams she could hardly contain. She felt flooded with light. Her body was getting alive in unknown ways. It was like a sleeping spirit had been stirred. A spirit that had been under a long spell, just like in the fables. And someone had decreed its liberation only with the touch of such and such. She felt her body arched and alive, her breasts taut, seeking that touch: a constant longing seized her. 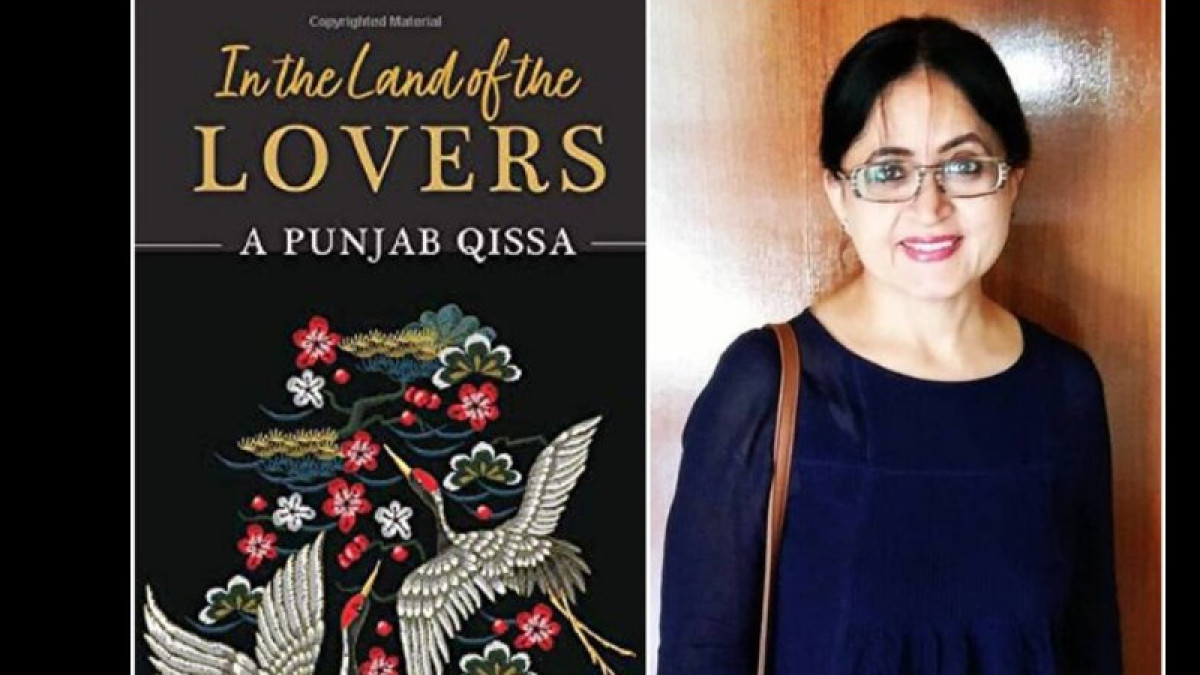 Sakoon Singh, Author of 'In the Land of the Lovers: A Punjab Qissa'

She climbed up to the terrace and found that it had rained while she was taking her afternoon nap. Everything was washed clean. It was still very windy. The fronds of the areca palms were swaying noisily. The leaves of the guava were glistening and like an offering, the tree had deposited a fruity harvest together with some stray twigs and dry leaves on the cast iron cover of the drainpipe. Nanaki pulled out a twig from the tree and swept it all aside to release the rainwater accumulated on the terrace. The water began to trickle and then moved in a sudden swirl, whooshing down the pipe like a deluge. Nanaki looked at the clear sky and wondered if it had rained in Patiala. She could see Himmat on his bike, riding by himself in the rain, not hassled one bit, willingly getting soaked to the bone, feeling the water running down his body. What if she was riding with him in the rain, her wet kurta clinging to her body and with squelching wetness, holding him from behind: her body close to him and resting her head on his back and letting the water wash down on them. Their bodies melting into each other, the whirl of rain making the two indistinct. And now he parks the bike under a tree. Rain trickles through the branches. She gets off from behind and gets on the bike from the front and now sits facing him. They sit face to face, their legs locked on the stationary machine. Water pours down on them. They kiss long, deep languorous kisses. He pulls her close. Now his hand travels up her wet shirt. Time ceases. But again.

After such knowledge, what forgiveness?

(An extract from In the Land of the Lovers: A Punjab Qissa, a novel by Sakoon Singh)