India enjoy the kind of reverence that Tansen does. Born near Gwalior, Tansen was tutored in the Sufi tradition by Shaikh Muhammad Ghaus and in the Bhakti tradition by Swami Haridas. As a result, Tansen’s spectacular métier is a combination of both these schools of music. He played a pivotal role in the evolution of Dhrupad musical style and eventually, of Hindustani classical music as a whole.

The magical properties of Tansen’s music are in themselves responsible for the innumerable legends that surround this gifted artist. It is said that the divine beauty of his Raga Megh Malhar used to move gods, who would shower the parched earth with life-giving rains. Even today Raga Malhar is one of his most popular compositions and it often features at the Samaroh gatherings.

The great legend’s mortal remains rest in a simple grave on the right of the mausoleum of his Sufi master Shaikh Muhammad Ghaus in Gwalior – a befitting backdrop today to the Tansen Samaroh, which is celebrated every year in the month of December in Behat village and Gwalior city. The four-day musical extravaganza is a treat for both artists and aficionados who flock here from home and abroad to appreciate the nuances of vocal and instrumental performances.

Reputed to be one of India’s oldest music festivals, it is organised by the Ustad Allauddin Khan Sangeet Evam Kala Academy (UAKSKA), Bhopal, in collaboration with the department of tourism, Madhya Pradesh. The Tansen Samaroh entered its centenary year with the World Music Conference 2015. The Samaroh also honours the most accomplished artists with the Tansen Samman.

Gwalior is one of the most significant hubs of Hindustani Classical music. Dhrupad singer Baiju Bawra lived here for years and sarod maestro Amjad Ali Khan’s family home is now a museum. It has kept alive the tradition of the Tansen Samaroh for a long time by drawing the best talent from across India to illuminate the illustrious pathway to the starlit dome of musical rhapsody. This is the largest and the oldest Samaroh of UAKSKA, in the field of classical music.

In 2015, the 4-day Tansen Samaroh took a slightly different turn when the festival was extended by a day. There was no dearth of music lovers on all five days (23–27 December) at the venue in proximity to the mausoleum complex of Shaikh Muhammad Ghaus in Hazira, the Old Quarter of Gwalior city. The citizenry of Gwalior has been enjoying this classical musical jamboree for decades as it used to be an integral part of Gwalior State’s annual celebrations during the heyday of the maharajas. I was awed by the rapport of the crowds with the different musicians and vocalists participating in the free morning and evening sessions. After all, the city has an ancient culture of musical traditions, and the performers draw even more inspiration from the accolades showered upon them.

Musical sittings, a debate competition on music, an exhibition on Tansen’s life and times and the annual Tansen Samaroh award ceremony add fire to the vivacity of the programme. As per tradition, the festivities concluded at Tansen’s birthplace, Behat, just 45km from Gwalior, with huge crowds massing the Jhilmil riverside.

Many aspects of the festival are given a great deal of importance. The colourful 3-D lighting, for instance, highlighted even the stage setting, which replicated the Chausanth Yogini Temple at Mitaoli, located at a short distance from the city.

It is also customary to drape Tansen’s Tomb with a new richly embroidered chadar. Visitors can be found plucking off leaves from the nearby tamarind tree, evoking the legend that whoever eats its leaves will be blessed with a melodious voice like ‘Sangeet Samrat’ Mian Tansen.

The festival itself is a banquet of delights for classical Hindustani music fans. It featured traditional Milad and Hari Katha recitations in the morning sessions. Around 40 artistes participated in the evening and morning sessions. It has also been a long held tradition for the Samaroh to showcase the Dhrupad-style of music – Gwalior’s very own specialty – and a host of artists have rendered it with flawless ease. The students of Gwalior Sangeet Mahavidyalaya presented Dhrupad songs during the morning and evening sessions on the first four days. The festival also featured the students of Dhrupad Kendra, Gwalior.

On the morning of 24 December, the audience was mesmerised by the mellifluous strains of Rajesh Sand, a specialist in the Dhrupad style. In the evening session, Merope France charmed the avid listeners. Christmas morning was particularly delightful as it was charged up by the soulful sarangi of Harish Narain and Dhrupad vocals by Indrakishore Mishra Malik.

Throughout the festivities, while the balmy weather added new interpretations to the performances in the day, the night chill brought an edge to the medley of sur and tal that transported the massive gathering to another world with the stunning Raga Jog in the jugalbandi of Saskia Rao de Haas (Indian cello) and Phil Scarf (saxophone). Other luminaries to light the way were Abdul Majid Khan (sarangi), Sulekha Dharkar (khayal), Rajan and Sarang Kulkarni (sarod), Shounak Abhisheki (vocals), Dhrupad specialists from Mumbai, Sukhdev Chatturvedi and Ustad Sabir Khan (tabla).

On the last day – 27 December – the crowds drove to Behat, for the closing ceremony. It gave them an opportunity to enjoy the Dhrupad genre by the skilled singers of Dhrupad Kala Kendra, Behat, Bharatiya Sangeet Mahavidyalaya, and renowned artists Prajwal Shikr and Pandit Shriram Marathe. It is believed that at Behat’s Shiv Temple, Tansen, as a child, even swayed the walls with his singing. 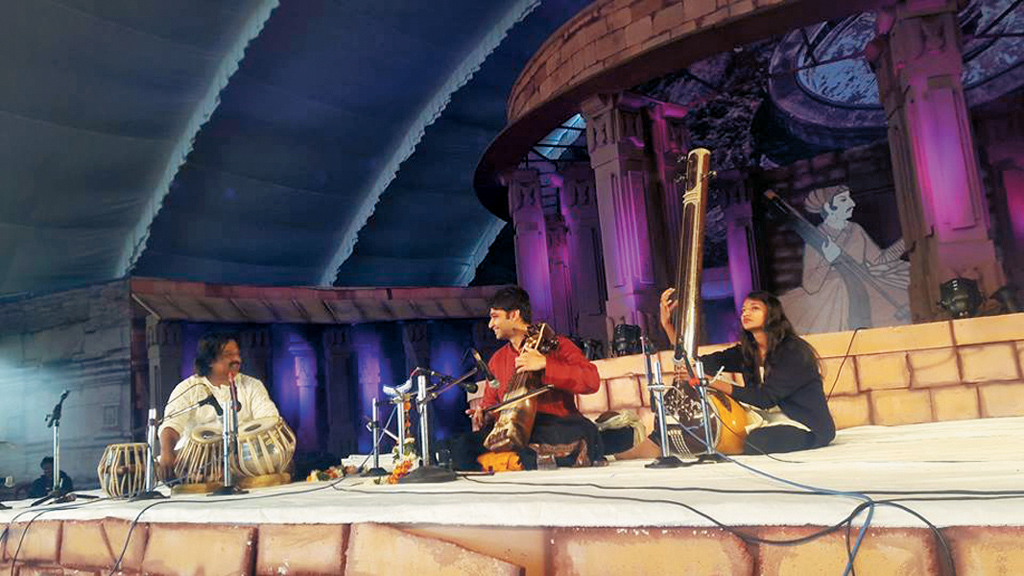 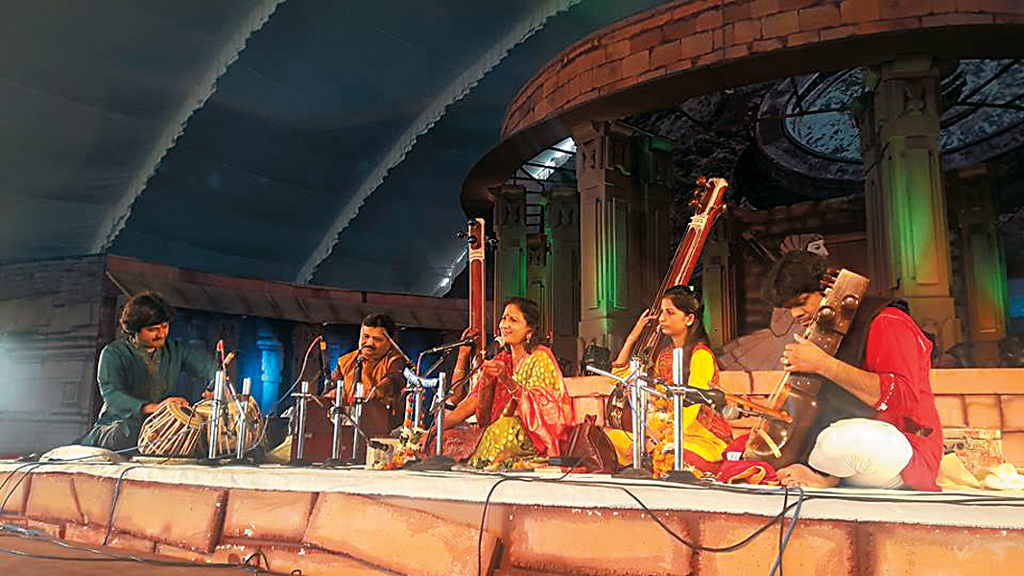 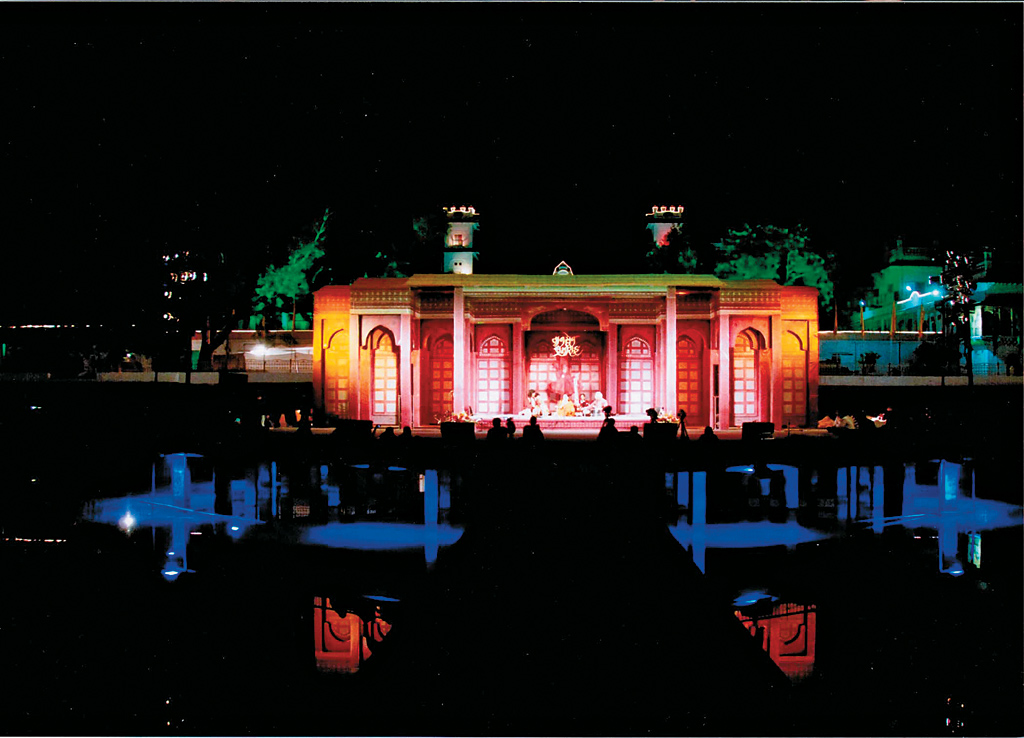 The festival concluded with a glittering ceremony in which the winners of the 2013–14 Samaroh Award – veena recitalist Pandit Vishwa Mohun Bhatt – and 2014–15 awardee – Pandit Ajoy Chakravorty – were presented a ceremonial shawl, a citation and cheque worth ₹2 lakh.

A visit to the over 1,000-year-old Gwalior Fort is de rigueur – just to celebrate the glorious run of temples, palaces and fantastic sculptures that lie within its ancient embrace. First off are the mighty Jain sculptures, carved in stone in a stunning line-up on either side of the steep ramp snaking its way up to the Fort.

The magnificent Gwalior Fort sits atop a hill, surrounded by plains
Jitender Gupta

Many of these had been defaced by soldiers of the Mughal Empire, explaining the chopped noses, arms, etc., of the sculptures. Stop off points: the magnificent Man Mandir Palace marked by lavish ceramic mosaics, lattice work and sandstone carvings; Jauhar Kund is a poignant reminder of ritual suicide committed by the ladies who refused to be taken captive in defeat; Gurjari Mahal now serves as museum. A special exhibit is the carved figurine of Salabhanjika – ‘India’s Mona Lisa’. Temples worth a dekko include the 9th century Teli Ka Mandir, embellished with erotic sculptures, and the Sas Bahu Ka Mandir complex. The nightly Son et Lumiere in Hindi and English is not to be missed.

The Italianate, home of the Scindia royals was constructed in 1875. Parts of it are now a museum well worth a visit for the fabulous Durbar Hall gilded with 58kg of gold. It has to be approached by a Belgian-glass staircase from the entrance hallway. Several elephants were mounted on the roof to ensure that the gilded ceiling could handle the weight of the two massive chandeliers readied to light up this astonishing stateroom. Enjoy the display of the electric silver train, which used to ferry brandy and cigars around the grand banquet table.

Take a tour of Gwalior’s picturesque countryside in Morena District, about 40km from town. Enjoy encounters with its fabulous spiritual and architectural past amongst the temple site discoveries in this Chambal Valley enclave. If you have the time, drive further ahead to Shivpuri, Datia, Orchha and Jhansi.

The Mitaoli Temple straddles an isolated spur amongst green fields. This circular Chaunsath Yogini Temple (also known as Ekattarso Mahadeva Temple) is believed to have inspired the architectural duo Baker and Lutyen in designing the Parliament House in Delhi. Soak up the wonder of the vestiges of the glorious vision of what Raja Devapala had commissioned in 1323. Villagers still use it as a site for Tantric rites.

Padavali Temple serves up a beautiful mandapa under restoration. The steep flight of steps open on to densely illustrated walls featuring carvings of richly detailed vignettes from Indian mythology.

An earthquake, it is believed, wrought havoc in the village of Batesar, which held over 400 temples in its embrace. For years this ASI site lay in neglect and in the clutches of the Chambal dacoits. The magician behind their restoration has been KK Muhammed since he took over as Superintending Archaeologist, ASI, Bhopal Circle. He negotiated with the dacoits to allow the restoration work of their ancestral holy spot. Almost 100 temples are under various stages of completion.

Head to India Coffee House for delicious south Indian fare. Kwality Restaurant is popular for its non-vegetarian dishes. Moti Mahal Deluxe is another option for Mughlai and Chinese fare – vegetarian as well as non-vegetarian. The Mansingh, housed in DD Mall has good ambience and great food.

Air Gwalior Airport, on the outskirts of the city, is connected to Delhi and Bho­pal. Taxis and autos don’t always go by the meter so bargain hard.

Rail Gwalior Station falls on Central Railway’s main Delhi-Mumbai and Delhi-Chennai line. Daily services are provided by the Taj Express and Shatabdi from Delhi and Agra.

Road Bus Gwalior is served by bus services from Delhi, Agra, Bhopal, In­dore, Jhansi, Khajuraho and many other destinations in the state. However, it’s recommended that you travel by rail as the roads aren’t great. 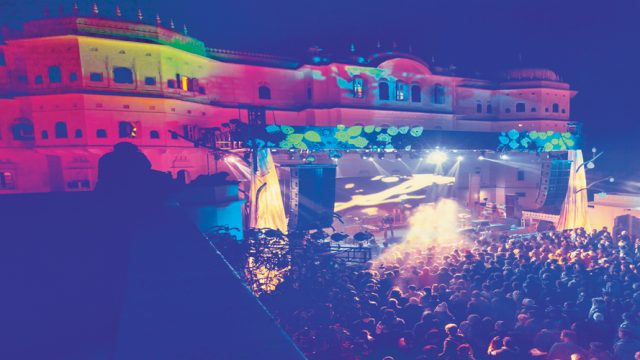 A music and arts festival for the Indian hipster 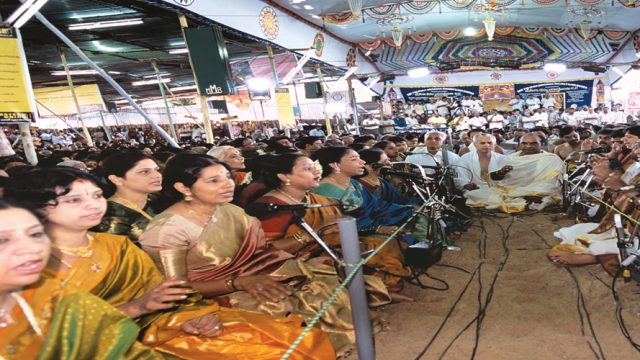 Every winter, Chennai reverberates with the sound of music 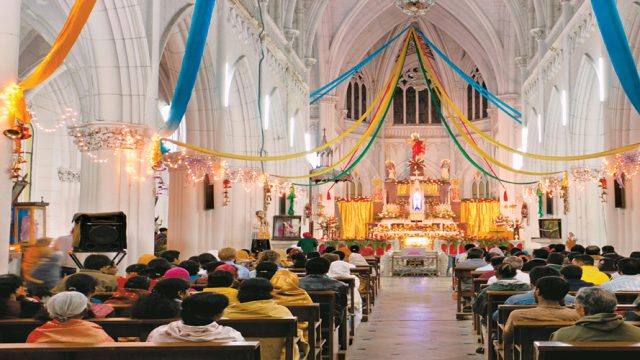 Christmas is celebrated with great fanfare all across India