Time: A weekend in December

Magnetic Fields, for me, started from the journey itself. Driving down the highway, away from Delhi and then through the dusty lanes of Rajasthani villages, brought out a sense of excitement and anticipation that any city dweller feels when they leave the concrete jungle behind. The six-hour drive ended with an odd convergence of urbanites at Alsisar Mahal, heart of the lesser-known village of the same name, in the Shekhawati region of the state. The distant sound of electronic music interspersed by occassional laughter bouncing off the high walls of the palace was loud enough to raise the inquisition of a weary onlooker parked outside the mahal.

As you enter the fortress, you’ll be caught amidst an eclectic crowd of travellers, from different parts of the country and the world, whose quest for musical escapism probably ends here. Magnetic Fields is where music, culture, art and bonhomie commingle to create a magical experience that is arguably unparalleded in the country. The avant-garde electronic beats originating from the sun-kissed courtyards of the regal Alsisar Mahal make for a strange, alternate reality, which seems to trap visitors for the duration of the three-day-long festival.

Launched by Abhimanyu Alsisar, a member of Alsisar’s noble family, only three years ago, Magnetic Fields already falls in the category of the ‘not yet commercial but getting there’ events that every festival hound has on his or her bucket list. Held over a weekend in the second half of December, it is known to showcase some of the most talented underground artists, both local and international. Your sense of time gets warped here (as these musicians are at work almost all the time!), curating an immersive dreamlike state that lasts even after it is over. And for someone who finds himself on a constant lookout for new and independent artists, I was fortunate to have been part of that dream in 2015.

The lawns of the palace housed the South Stage and the courtyard had the Red Bull Music Academy North Stage. Additionally, there was the Heineken Desert Disco that was set up just outside the palace, near the camping grounds meant to accommodate festival goers. Once the palace gates had opened at noon on Day 1, the Heineken Desert Disco kicked off the weekend, giving people only enough time to set their camps and shelters in and around the palace and gear up for the extravagance that awaited. Soft desert sand underneath the feet, warm sunlight reflecting off the shades and a cold beer in the hand set the tone right for crowds to embrace the Dubai-based 264 Crew, which played out disco tunes and pumped energy into one and all. The masses of people eventually retreated to the stages within the palace gates once the chill of the evening crept in. The South Stage then saw a bunch of home-grown musicians such as Nicholson, Fuzzy Logic and Donn Bhat + Passenger Revelator and Malaysia-based Bass Sekolah, all of whom further energised the crowd.

The schedule of the festival was strategically chalked out for only one stage to be functional at a time, in order to ensure maximum crowd. The evening then moved to the Red Bull Academy North Stage where the lights and sounds of the night broke through the starlit skies, much beyond daybreak. Special mention is owed to the collaboration of two artists from Amsterdam, Hunee and Antal, who kept throwing a volley of disco tunes that were very much in sync with the spirit of the night. The night gave the audience a sneak peek into the underground music scene of our neighbouring country Pakistan, with artists like TMPST and Rudoh keeping the night alive. 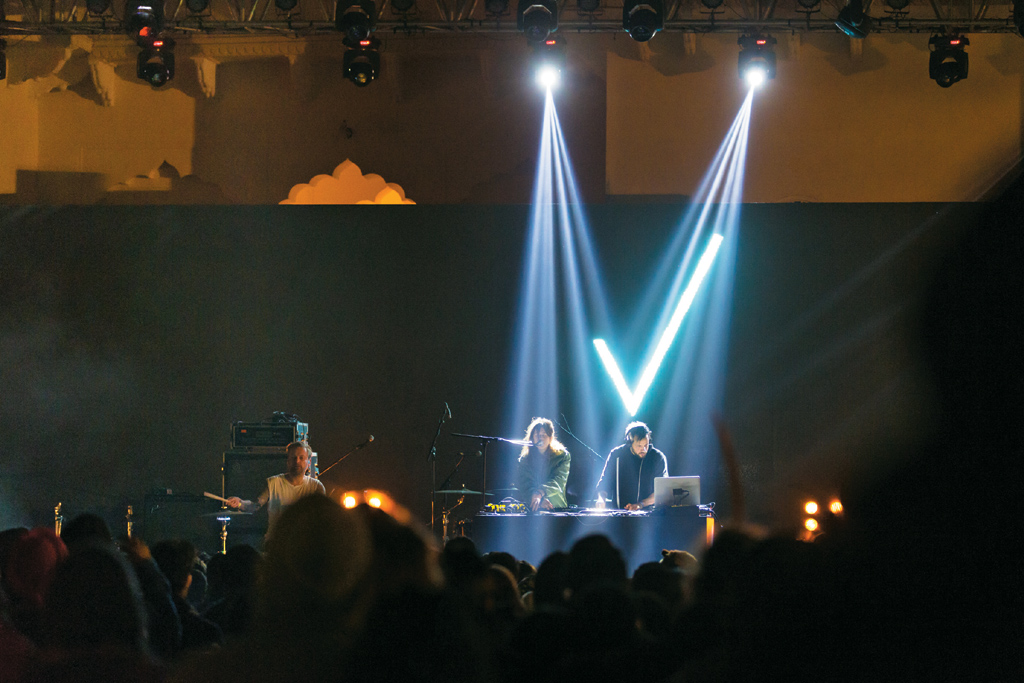 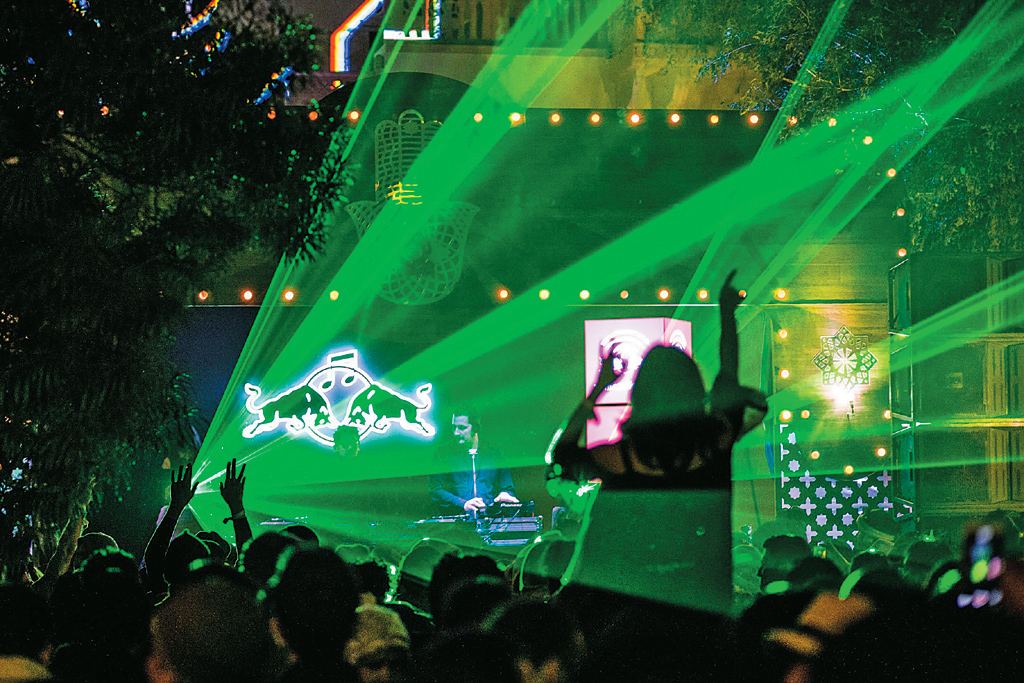 Various DJs and bands perform at Magnetic Fields every year

Having gotten barely any time to blink an eye (and it was only Day 1), I retired to my tent, although every inch of my body and every depth of my mind was still throbbing with life. After getting a few hours of sleep, I woke up to Day 2 which was already in full swing. The Heineken Desert Disco continued to play records, while the crowds were grooving to the tunes of M.Mat on the sandy expanse under comforting sun. Mumbai based Sid Vashi opened the South Stage with his ambient and soulful music infused with hypnotic electronic samples. The jazz/cabaret-styled music of Delhi-based Petercat Recording Co. enthralled the audience with unique sounds. Then came some of the powerhouse performances by US based DJ Shigeto and RATATAT who had a strong claim to the night. Shigeto had his brilliance exhibited, wherein he kept playing his arsenal of electronic samples, all while drumming to the beat and the tune, to provide a concoction of sounds that took over the crowds and swept them off their feet in utmost wonder. RATATAT stood out with their rocktronica set and signature guitar shredding, all of which were beautifully incorporated with stunning visuals that transcended one’s imagination. Later, the night saw performances by Germany born DJ Objekt and DJ Koze. All through the night, psychedelic visuals kept bouncing off the walls of the palace.

What happened next is something that the festival can easily claim as their biggest selling point; yet it is kept relatively under wraps to retain its exclusivity. At around the break of dawn, the scene moved to the underground dungeons of the palace for the after party headlined by Soul Clap. Due to space constraint, this was obviously on a first-come-first-serve basis, limited to about 50 people. Those who could not get in to the after party retired to their respective tents or hung around the palace, enjoying the ambience. 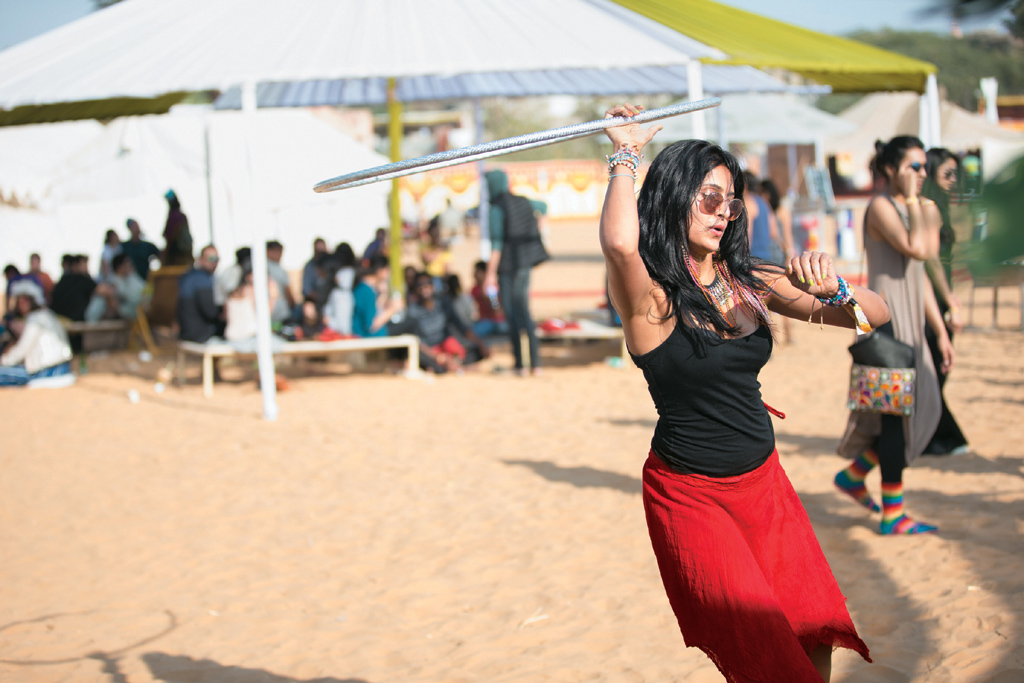 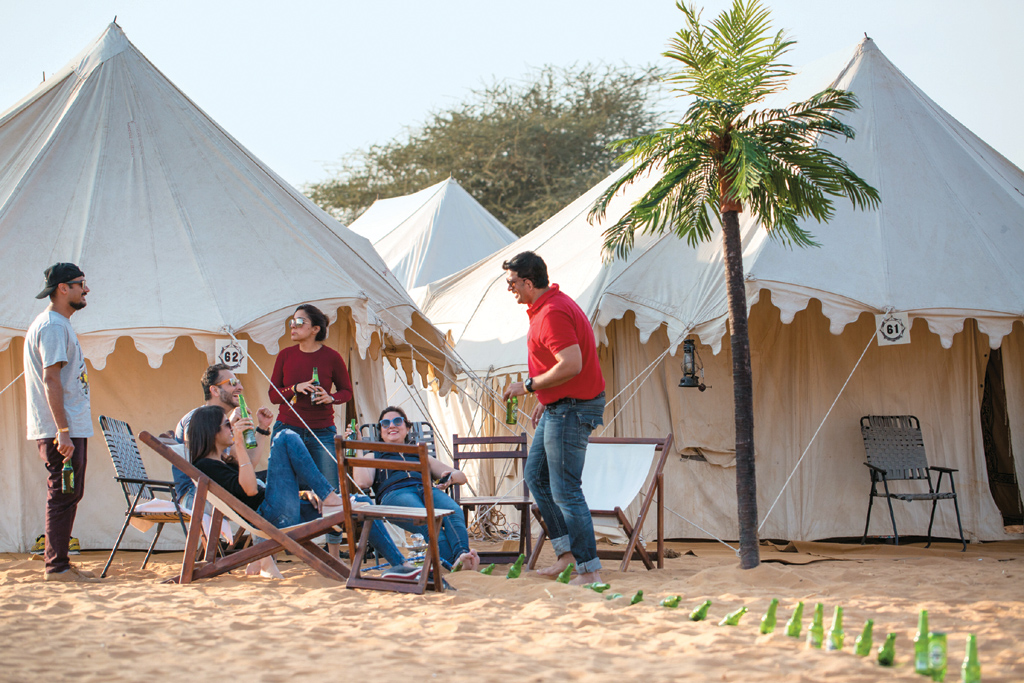 Visitors indulge in a variety of relaxing activities at the festival

The third and final day of the festival saw people relatively subdued earlier on in the day. However, that didn’t last very long as the final set of artists was ready to take the weekend to greater heights of euphoria. The biggest highlight of the night for me was the set by Austria-based HVOB (Her Voice Over Boys). With their hypnotic music and prominent vocals, the Austrian duo created an atmosphere that could give a high like no drug can. Another shout out is owed to Delhi-based duo Perfect Timing, who in the middle of their set, surprised the audience with a unique rendition of Hotline Bling. Towards the end, crowds were treated to an audio-visual set by BLOT, during which the sky was lit up with a spectacular array of lights.

Other Things to Do

Magnetic Fields is much more than just music. There were yoga and meditation sessions in the early hours of the day and stargazing sessions in the middle of the night, on the palace terraces.

The souks set up within the palace had booths where one could get minimalist tattoos and exquisite henna designs. Another feature of the festival was the commendable initiative to uphold the tradition of local arts. Much like the intricate fresco paintings that can be found in Shekhawati, the festival organisers were engaged in creating a massive fresco right outside the palace, to capture the spirit and essence of the weekend. And as if that isn’t enough, the 17th-century Alsisar Mahal itself is quite the sight to behold. This battle-harderned fortress that once belonged to the Thakurs of Alsisar, has now been turned into a luxury hotel, with all its royal trappings.

Overall, Magnetic Fields attempts (and successfully so) to be a world of its own, where everything is unique (they even had their own currency within the palace!) – a world set in a juxtaposition of traditional architecture and contemporary sound and light.

In a world so surreal, it is only obvious that one would happily leave behind the monotony of urban life and let loose, even if for three days. And the aftermath of it has only left me wishing for it to come back again.

Majority of the people who come to the festival set up camp in the Bedouin-styled Campsite (Tariff: ₹20,000–25,000, for three nights for two/ three persons in 2015) right outside the palace gates. These are fully furnished luxury tents with en-suite bathrooms.

The festival also has arrangements for accommodation in Alsisar Mahal’s (Jaipur Tel: 0141-236890, 2364685; Tariff: ₹35,000) plush royal suites, all of which, from what was told to us by the organisers, were sold out in one day. For bookings, you can log on to the festival’s official website W magneticfields.in.