The story of Gir and its lions is full of maharajas and shikar, the sunset

of the Raj, the early efforts of the Bombay Natural History Society’s first conservationists and the emergence of India’s post-independence wildlife protection policies. Over hundreds of years, maharajas hunted big cats for sport but it was the British, with their sophisticated weapons, that put a nail in the coffin for the lion in India; well almost.

In the early 20th century, the lion population of Gujarat suffered a tremendous setback. The famine years, from 1901–1905, forced the animals to hunt for food in human settlements and target the human population and livestock.

The man-animal conflict that arose from this desperate situation was brought under control by the Nawab of Junagadh – the district that most of Gir falls within today – when he decided to undertake the supervision of a project to save the few remaining lions of Gir. Lion numbers rose and apart from a few initial hiccups in the wildlife protection programme following his death, shooting was rigidly controlled. While elsewhere in India lions quietly vanished, in Gir they were given half a chance.

On 18 September 1965, Gir was formally declared a Lion Sanctuary. In 1974, it was declared a national park and nature reserve. Today, the Government of Gujarat has declared an area of 1,421sq km as the Gir Protected Area, and an additional 500sq km has been made a buffer zone. The estimated 359 strong count of lions in this forest indicates that the project for recuperating the species, to bring it back from the brink of extinction, has been largely successful.

Even then, the imminent threat of extinction hovers dangerously close over the Asiatic lions. Having been bred from less than 20 specimens, the present-day population of Gir’s lions shares the same gene pool.

The Asiatic lions (distinguishable from their African counterparts only by a few morphological differences) share the forest land with villagers and livestock, not to mention a number of myriad industries that are waiting in the wings to turn Gir’s natural resources into hard cash. But as of now, there is a law to prevent this eventuality.

The Gir forest, stretching over an expanse of 1,412.13sq km, is one of the largest tracks of dry deciduous forests in the world. The landscape is mainly undulating. Seven perennial rivers drain the area: Hiran, Saraswati, Datardi, Shingoda, Macc-hundri, Ghodavadi and Raval.

The entry gate of the park is at Sasan, on the southwestern border of the national park. Entry tickets to the park are issued by the reception desk at the Sinh Sadan Guest House in the Forest Department Complex located near the main gate.

Jeeps are available for hire at the main gate. Sinh Sadan, run by the forest department, arranges day safaris (private open jeeps permitted with forest guard/ guide), as does the Lion Camp Safari (tie up with the forest department), located 3km outside the park. The safari routes cover areas where lion sightings are high. Trips are also arranged to the tourist attractions such as the Interpretation Centre at Devalia (11km from the entry gate on the Sasan-Malia Road, within the park precincts), the Crocodile Breeding Centre near Sinh Sadan, the Kamleshwar dam (10km from the entry gate) inside the park and to Tulsishyam, 135km from Sinh Sadan.

Gir, besides being lion country, is a birdwatcher’s paradise. The Gir forest offers its visitors much more than a glimpse of the wilderness. Though the park is quite dry, crocodiles and other wildlife thrive around the few scattered perennial water sources.

There are seven designated tourist trails in the forest open to jeep safaris, where visitors can try and spot lions in their natural habitat. Tourists are permitted to take their own vehicle but must be accompanied by a forest guard or a guide. Or they can join a safari arranged by the forest department or the Lion Safari Camp. Sinh Sadan arranges an open jeep safari from the entry point at Sasan.

To reduce tourist pressure within the forest, the forest department has created a 412-ha Interpretation Zone at Devalia, a short drive from Sasan. There is a chain-linked fenced lion area, primarily to stop the awful ‘lion shows’ within the park.

The Crocodile Breeding Farm, located near the Sinh Sadan Lodge at Sasan, where crocodiles are bred for release into the wild, is worth a visit. About 10km away, on the Hiran river, is the Kamleshwar dam, also a good place to spot crocodiles.

The temple and hot springs at Tulsishyam draw wildlife enthusiasts and pilgrims alike. The strong smell of sulphur permeates the air.

When to go The park is open from 16 October–15 June. The summer months are scorching hot, with the tempera­ture hitting 43˚C. Best time to visit is definitely late November to early March, when the temperature can drop to a cool 10˚C

Go there for Asiatic lions

Location In the southwest of the Saurashtra Peninsula

taxi ₹ 6–11 per km. Or take a train to Junagadh and a taxi to Sasan Gir

Road The drive from Ahmedabad to Junagadh is particularly smooth.However, expect a rough ride on the last 10-km stretch, a forest road. Volvo buses run from Ahmedabad to Junagadh (₹ 350–400 per person); from here to Sasan Gir, mini-buses charge ₹ 50 per person and luxury buses ₹ 100. State transport buses make the 2-hr trip between Junagadh and Veraval via Sasan Gir throughout the day 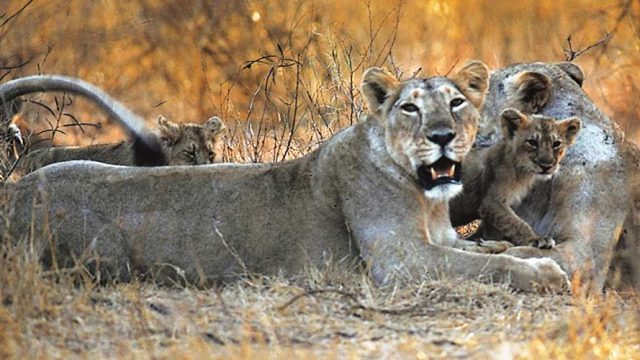 Here’s a quick guide to the land of Asiatic lions