and cultural realms, is perhaps the busiest amongst all religions. Hindu festivals are mostly linked to seasonal change and reaping of the harvest, though they also have a strong association with its folklore, legends and epics, often revealing remarkable religious and philosophical depth. In this context, a significant festival in the calendar is Diwali. Over the centuries, this festival has become a national one, enjoyed by most Indians regardless of faith – Hindus, Jains and Sikhs.

Usually celebrated in November and sometimes in October, Diwali has its origins in the country’s rich agrarian culture. A harvest festival that marks the last of the reaping before the onset of winter, Diwali is regarded as a harbinger of prosperity. Lakshmi, the Hindu goddess of wealth, is offered prayers for success at the outset of a new financial year and people close their accounting books. Traditionally, this practice extends to businesses all over the Indian Subcontinent, marking the day after Diwali as the first day of the new financial year.

A few days before Diwali, a typical Indian household undergoes a thorough cleaning spree, an act that comprises not only cleaning, but also the sprucing up and decorating of homes and offices. The five-day festival begins on the day Lakshmi, the goddess of prosperity and fertility, was supposedly born from the churning of the cosmic ocean by the gods and demons, as described in the creationist myth of samudra manthan. On the day of Diwali, revellers wear new or their best clothes, light diyas and candles (hence the name ‘festival of lights’), create rangolis with coloured powders and flowers on the floor and pray to Lakshmi. People leave their doors and windows open, and light lamps to “invite” her in. This ritual comes from the belief that Laxmi wanders the earth on this night and seeks a home where she feels welcomed.

This is followed by the bursting of crackers and lighting of phooljharis (sparklers), after which the family or community feasts on traditional Indian sweets.

However, even though the very nature and manner of the celebration differs across regions, the mere act of lighting a lamp in an Indian household to mark the occasion connotes a larger symbolism – that of victory of light over darkness, knowledge over ignorance, hope over despair and good over evil.

The predominant folklore about Diwali comes from the well-known Indian epic, Ramayana. Rama, the king of Ayodhya, returned to his kingdom, along with his wife Sita and brother Lakshmana, after 14 years of exile, during which he vanquished Ravana, the king of Lanka. In order to celebrate his return, his subjects illuminated the path he took with lamps. The Mahabharata also mentions the festival, wherein the Pandavas return after 12 years of exile in forests and a year of agyatavas (living in disguise).

In many regions of India, the festival of Diwali extends over five days, centering on the new moon at the end of the Hindu lunar month of Ashvin and the beginning of the month of Kartika. Normally falling at the end of October or the first half of November every year, this darkest night of autumn is lit up with diyas, candles, lanterns and fairy lights, creating a magical spectacle. However, the preparations for Diwali begin days or weeks in advance in some communities. Normally, one will see a two-day preliminary preparation and another two days of festivities after Diwali. 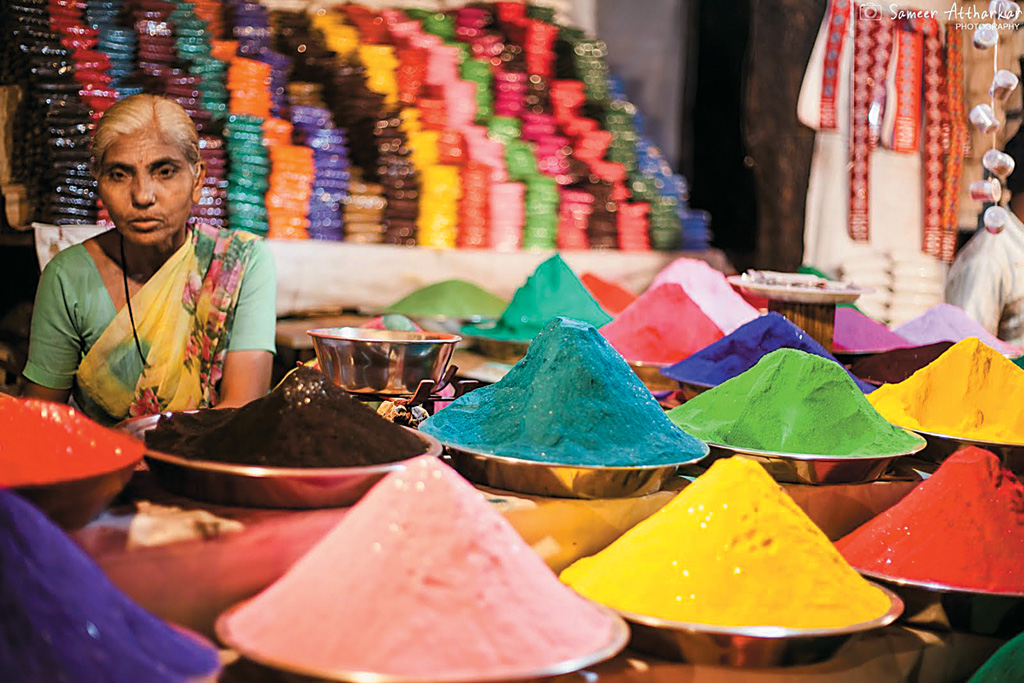 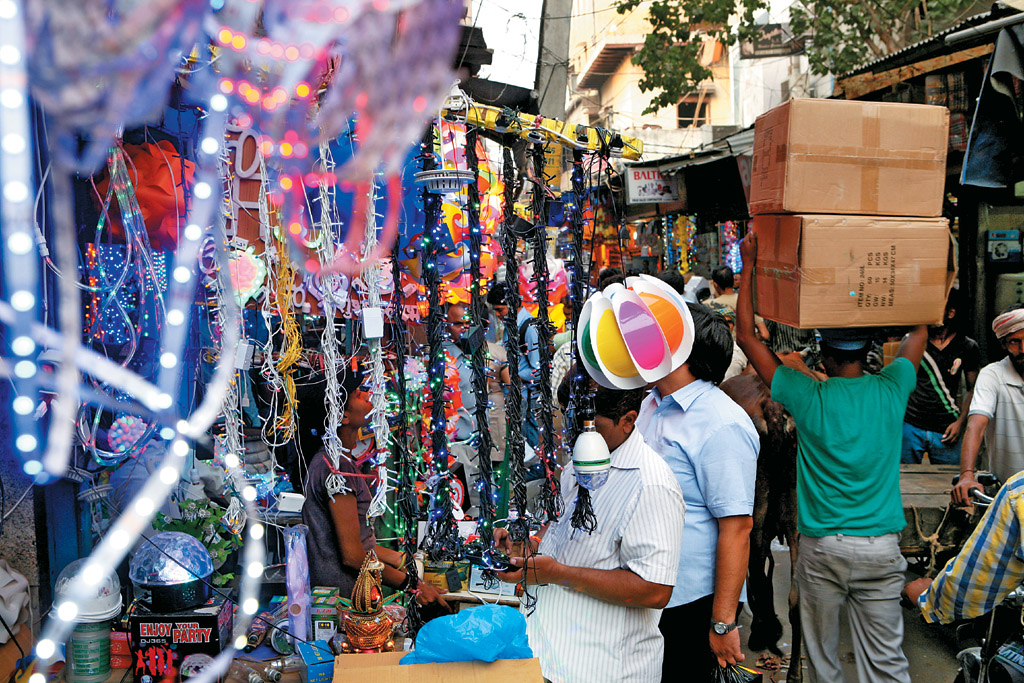 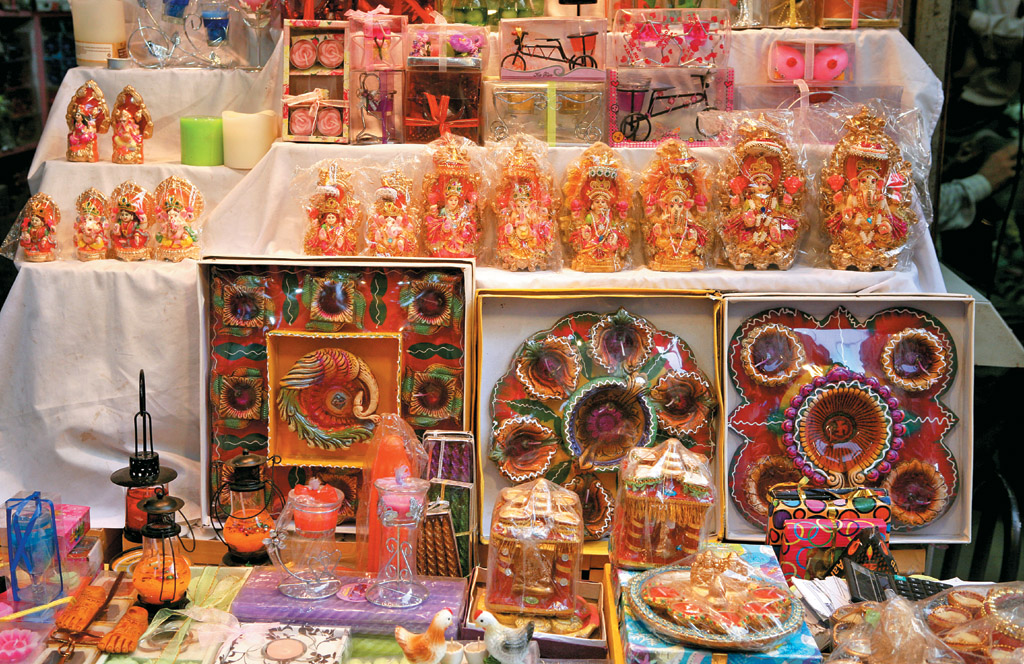 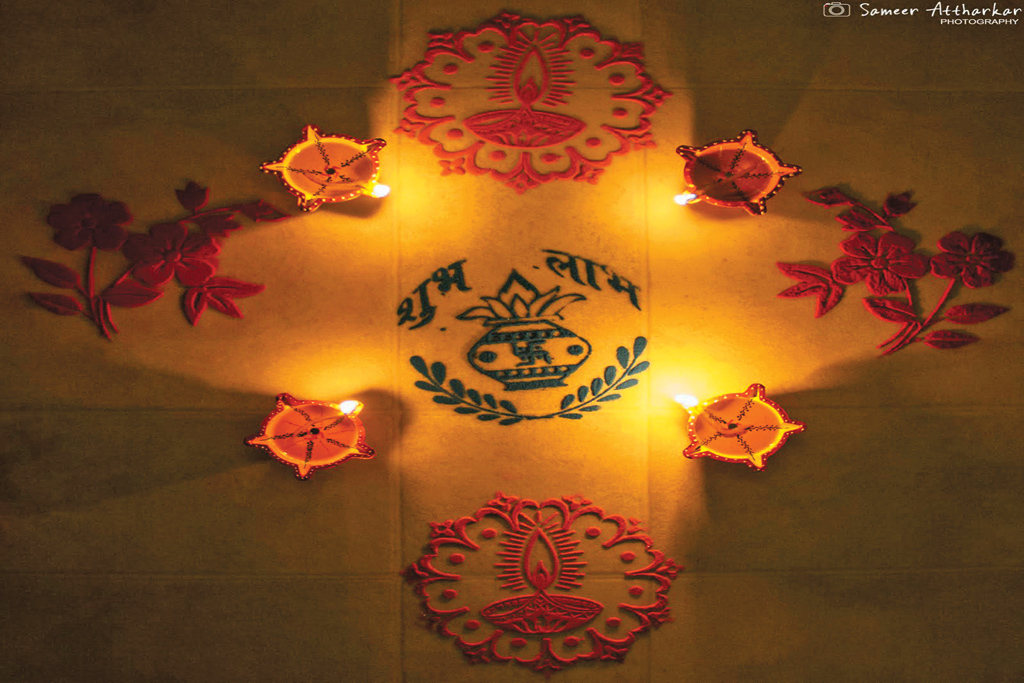 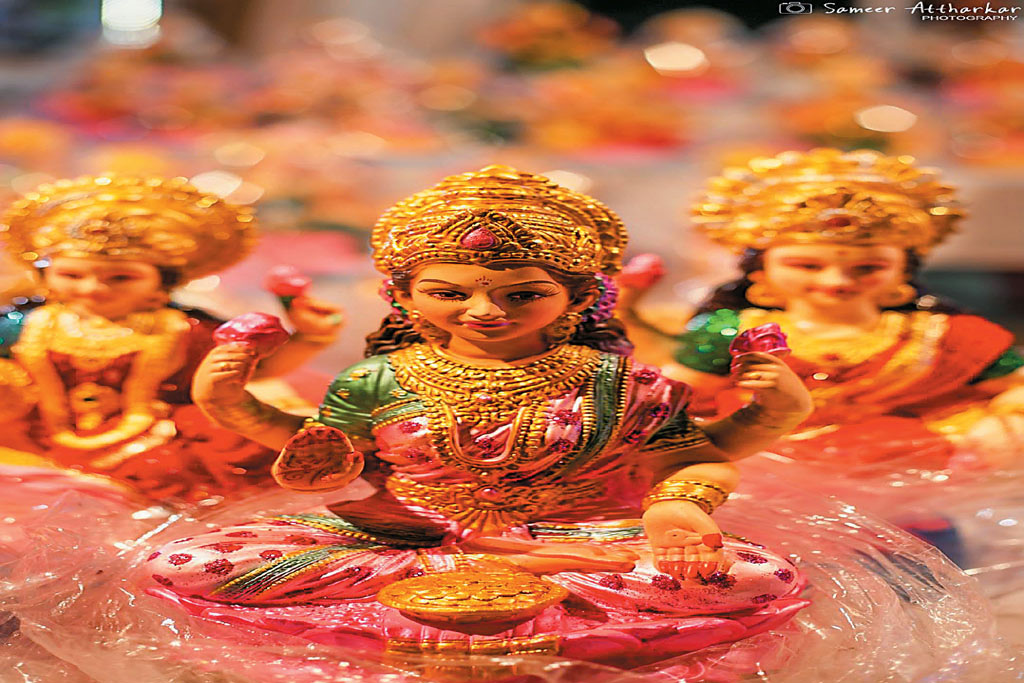 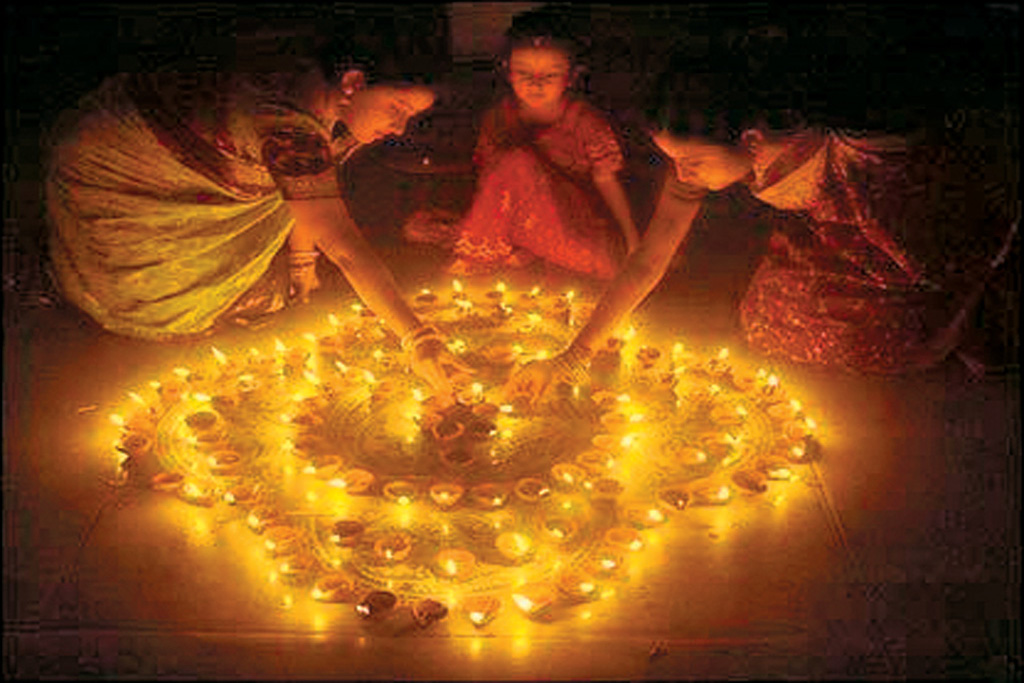 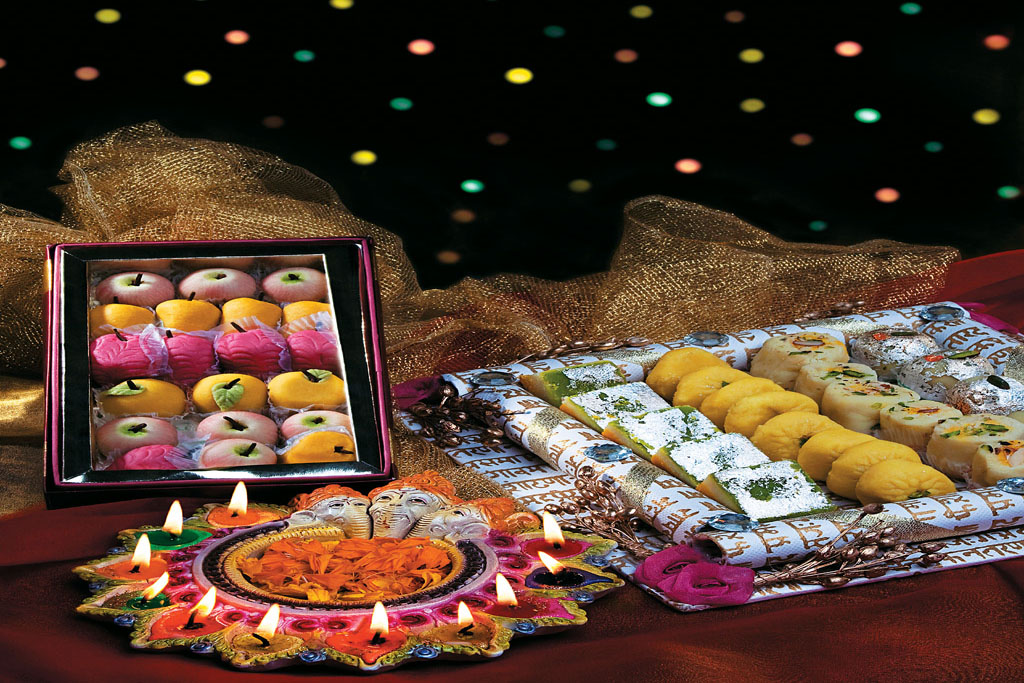 The festival of light and its various elements

The Sikhs mark the occasion with Bandi Chhor Divas, the day when Hargobind, the sixth Sikh Guru, freed himself and a few Hindu kings from the prison of Mughal emperor Jehangir in the Gwalior Fort and arrived at the Golden Temple in Amritsar. Bandi Chhor Divas literally translates to ‘day of liberation’. It is commemorated with the annual lighting up of the Golden Temple and firework displays.

Diwali is significant for Jains as well, since the last tirthankara, Lord Mahavira attained enlightenment on 15 October, 527 BCE at Pawapuri. To celebrate the festival, Nirvan laddoos are distributed in Jain temples across the word.

The first day in the run up to Diwali is Dhanteras, marking the birth of Lakshmi, the goddess of wealth and prosperity, as well as the birth of Dhanvantari, the god of health and healing. This occasion ushers in a cleaning spree at home – houses and premises are cleaned, renovated and decorated. Family members get together to make rangolis at their front doors or verandahs and set up the lighting arrangements that go hand-in-hand with modern-day Diwali. It is also a day of shopping for gold and silver items. Shops stock up well in advance for this festival.

The second day is Naraka Chaturdasi, or popularly known as, chhoti Diwali (mini-Diwali). Hindu scriptures narrate a tale of the demon Narakasura who was killed on this day by Krishna, Satyabhama and Kali. The day is marked by early morning rituals and puja (prayers). Some regions promote special bathing rituals with fragrant oils, followed by puja, while women apply henna designs on their palms. Families begin preparing sweets for the main day of the festival. 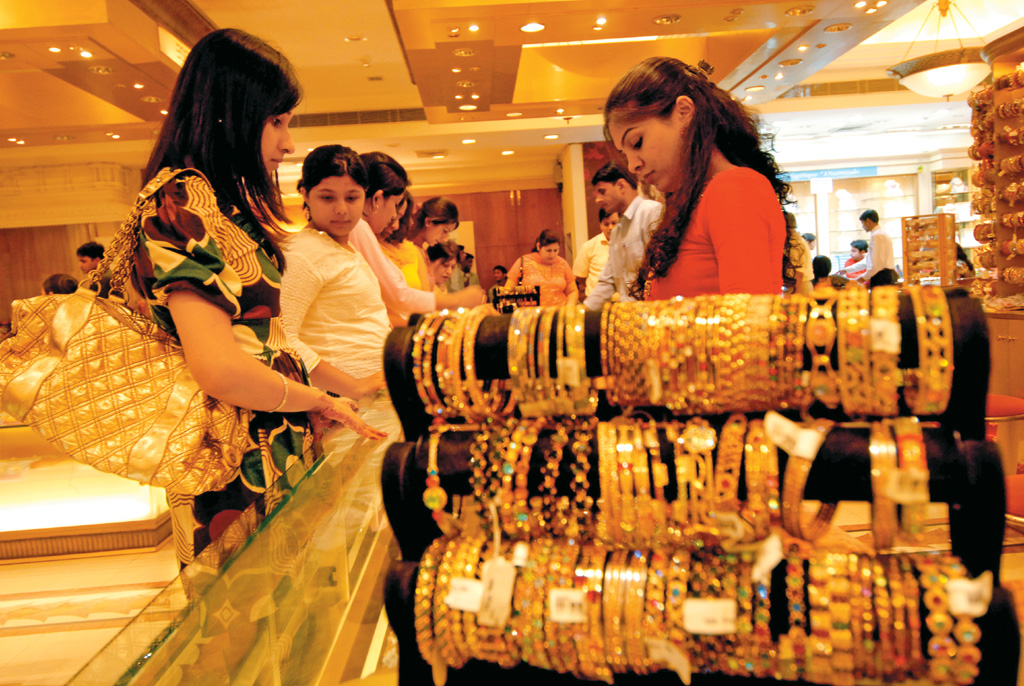 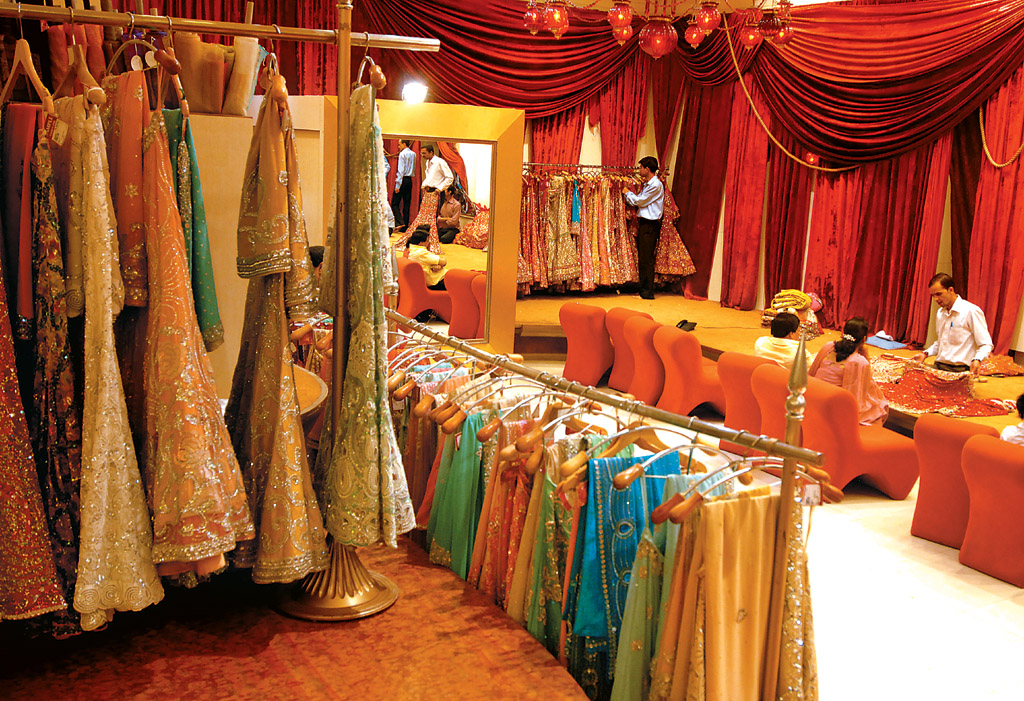 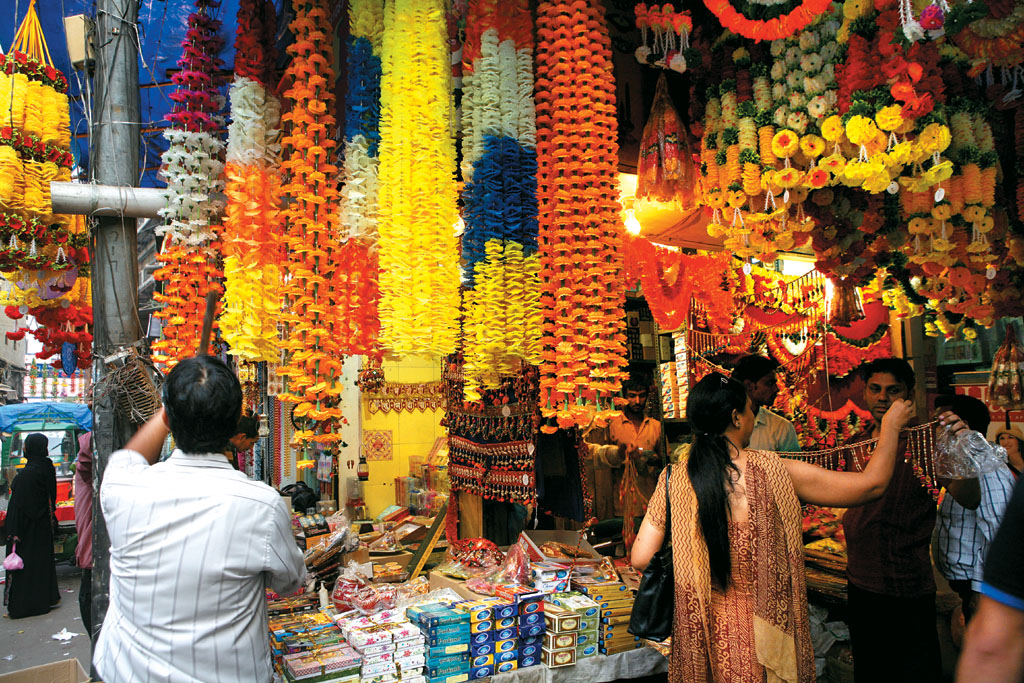 The day of Diwali is primarily known for Lakshmi puja. As revellers step out adorned in the best of clothing for the evening, diyas are lit and prayers are offered to Lakhsmi, along with other deities depending on what region you come from. Normally, Ganesha, Saraswati and Kubera are also offered prayers along with Lakshmi, all harbingers of wealth, knowledge and prosperity. Doors are kept ajar for the symbolic significance of Lakshmi entering the house. Fireworks are an important element in this dynamic festival. Usually, days before the occasion, local shops stock up on different kinds of fireworks. Crackers such as ground chakras, Vishnu chakras, anaars, sutli bombs, rockets and bigger fireworks are very common.

The day after Diwali is seen as the day of Padwa, which celebrates mutual love and devotion between married couples. Gifts are exchanged and in some regions, newly-married daughters and their husbands are invited for special meals. In some cultures, brothers bring their newly married sisters back from their in-laws’ homes to their original homes. Devotees perform Govardhan puja in honour of Krishna. In some parts of India, Diwali marks the beginning of the new year, especially where the Hindu Vikram Samvat calendar is popular. Hence, you will not find any shop open as traders and shopkeepers shut down for the passing of the old year and celebrate the new fiscal year.

Bhai Dooj or Bhaiya Dooji is the final day of the festivities, rounding up the long festival week. The festival celebrates the relationship between a brother and sister, similar to another Hindu festival, Raksha Bandhan where brothers swear to protect their sisters. On this day, brothers and sisters perform prayers together and the latter pray for the well being of their brothers; brothers give their sisters gifts and everyone gorges on sweets. 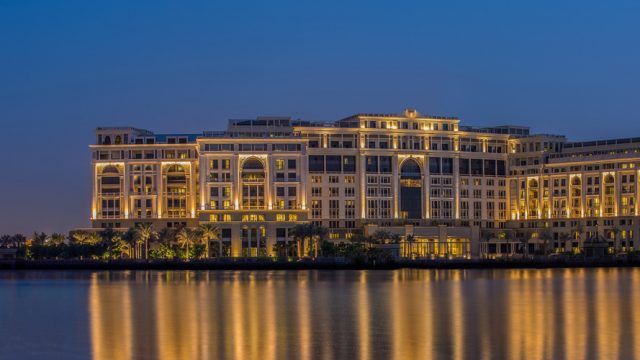 Ditch Diwali at home this year and head to Dubai for a luxurious weekend instead. Plan your stay around Palazo Versace Dubai’s ‘Be a Weekender’ offer 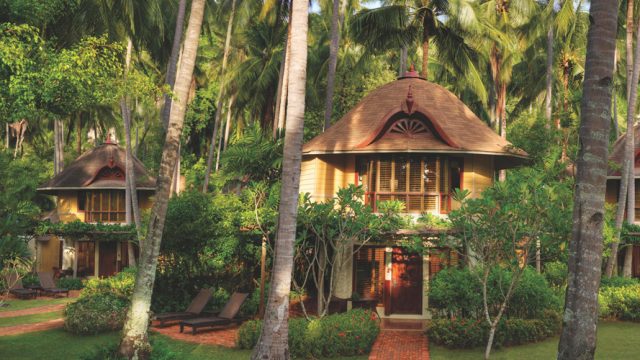 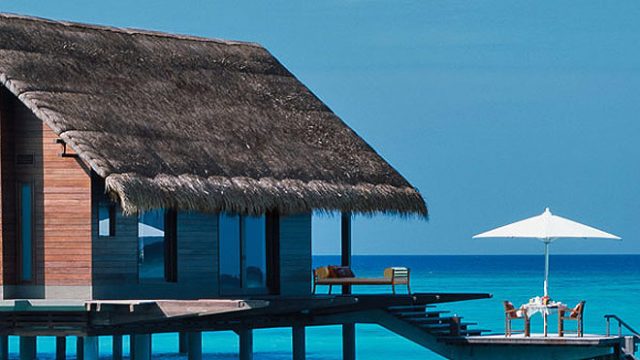 The ultimate getaway to Maldives