Amarkantak is really a hamlet; most of it lies along a main road, which comprises

a market with a few dhabas, ashrams and the Narmada Temple complex. If you are in a hurry, a day is enough to cover all main sights by car or jeep.

Amarkantak is also referred to as teerth raj or the king of pilgrimages. This holy town is a much sought-after pilgrimage centre for Hindus as evinced by the many temples located here. In addition to these religious sites, this serene place, with its lofty hills, waterfalls and forest cover, has much to offer nature enthusiasts.

This is a walled complex of shrines; the sacred kund is its focus, from which the Narmada is believed to have emanated. The kund is usually full of devotees bathing or performing rites. The white shrines here sparkle in the sunlight and are situated around two tanks. The water from the holy tanks pours out from a spout in the form of a gao mukh (literally, cow’s mouth).

The 18th-century Narmada Temple, commissioned by the Bhonsle kings of Nagpur, houses a black stone image of the river with large silver eyes. Opposite her chamber is the shrine of the Amarkanteshwar shivalinga. Located nearby, a group of 10th-century ruins, known as Karna Math temples stand with towering shikharas, built by the Kalachuri dynasty of Jabalpur. It is surrounded by shrines that contain icons dedicated to Surya, Vishnu, Gorakhnath and shivalingas. Every year, on the occasion of Narmada Jayanti, the black-basalt statue of the river goddess is draped in brocade and worshipped by hordes of zealous worshippers.

The Mata Narmada Temple faces the Narmada Udgam and is considered a shaktipeeth. It sees scores of devotees and of particular note here is a curious ritual that is performed by women. The ritual is apparently a ‘test of purity’ where women have to crawl out from under the statue of a dwarf elephant. If they somehow manage this miraculous feat, their soul is believed to be pure.

A one kilometre walk away from the temple lies this shaded grove with shrines and another kund. The water of this kund is believed to have originated from the feet of the Narmada. It is said that the goddess used to pluck flowers from this lush garden, which is now surrounded by shrines, a stream, medicinal plants and fruit-bearing trees.

These ancient sandstone temples were built by the Kalachuri king Karnadeva in the 11th century. You may want to pay a visit to these temples to marvel at their exquisite carvings. They are situated to the south of the Narmada kund.

Not many people visit this temple, rich with icons and architecture. Locals ascribe it to a king called Raja Karan Dahariya or King Karna of Dahala, who was supposedly the ruler of Amarkantak.

The Karna Math complex has three temples that have been constructed on a raised platform. The gate itself is crowned by four massive faces of the river goddess. Statues of 64 yoginis that represent the different aspects of the goddess adorn its walls. The temple tower rises in the form of the mythical Mount Meru. It is worth a visit for the intricate detailing alone, even if you aren’t particularly religious.

According to historical sources going back to the Greek historian Megasthenes (350-290 BCE), River Son reportedly got its name from the gold dust that was discovered in its water. The area believed to be the source of the river now has a kund, a fairly new shaktipeeth temple, a Shiva statue, as well as an old ashram.

The beauty of the surroundings unravels after you descend the 100-odd steps cut into the hill-side, and come to the very edge of the Amarkantak Plateau. From here you can see the Son falling down the Maikul mountain, villages located at a distance in the vast plains below and the many gentle folds of the Satpura Hills.

About 7 km away from Amarkantak, towards the western edges of the plateau, lie the beautiful Kapildhara and Dudhdhara falls. Kapildhara is associated with the legendary sage Kapil or Kapila, who reputedly spent 12 years meditating here.

Within these woods, the Narmada matures into a strong cascade of water splashing 70 ft down sheer rock. Depressions in the rocks, before the cascade, are believed to be the footprints of the sage Kapila.

You can drive up to the Kapildhara Viewpoint, but to look at it in its full glory and splash in the Narmada, walk half a kilometre down to the smaller but lovelier Dudhdhara Falls. Local jeeps are available for hire.

The hotels listed above have restaurants that are open to all. The dhabas in the market serve thalis.

When to go October-March Location On the Maikal Hills, at the meeting point of the Vindhya and Satpura Ranges Air Nearest airport: Jabalpur Rail Nearest rail: Pendra Road 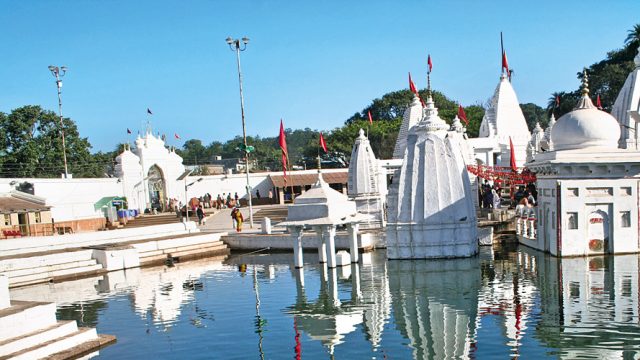 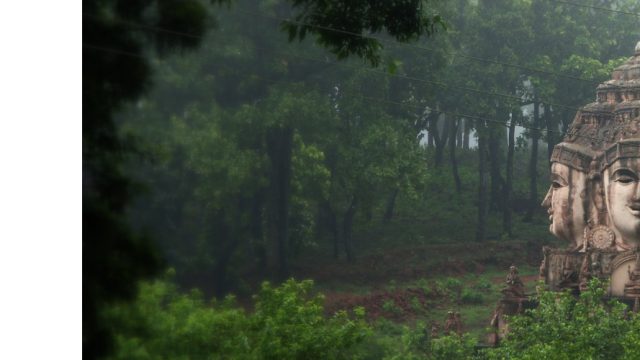