He’s telling us how sandalwood trees greedily suck sap from nearby vegetation and so flourish best in company. Sukanta talks about flora as people. “Weeds believe in spreading as fast as possible unlike other plants which stabilise first and then spread.” He stops suddenly and, without interrupting his commentary, aims the big lens of his SLR at a five-toed imprint on the squelchy track. “A jungle cat. This is an unusually clear print. And that one there is the footprint of a wild boar. They’re omnivorous, they’ll eat anything. They forage with deer but the deer don’t always trust them. If a boar feels like it, it could knock down a stag so hard its legs fracture. And then eat it.” He pauses to point out a red-vented bulbul, roosting atop a tree, warning itself in the 8am sunshine.

We’re adrift somewhere in the seventy-acre grounds of the Kabini Serai with the wonderfully chatty Sukanta, in-house naturalist, as guide. We could be in the wild; the property is out of sight. All around is scrub and jungle and the only sounds are koel and squirrel. Situated on the Kabini reservoir, which in the monsoon comes within touching distance of the resort, the Kabini Serai is a series of villas facing the water, beyond which is the Bandipur National Park and, even further, the clear outline of the Nilgiris.

The view from each room — of the still, grey river through tall Kabini grass, cattle lazing and egrets skimming the water — is hypnotic. The villas are tasteful, fitted out with luxurious silver-oak and red-sal furniture and done up in earthy colours. Though some of the villas are conjoined, care has been taken to insert wooden screens and plant clusters of bamboo so that privacy is maintained. From my ‘waterfront verandah’, I can hear my neighbour singing nursery rhymes to her toddler on her verandah but she seems far away as does everything else — the faint sounds of drumming coming from Karapura village nearby, the pastoral mooing of cows and the echoes from across the water.

The enthusiastic front office manager, Sanjeev Kumar, is proud of the absence of television in the rooms and urges guests to pay attention to birdcalls and catch the wildlife documentaries that are screened every evening. Conversations between management and guests centre on subjects like the weather, the animal life spottable in the Serai and what we saw on our safari. I saw a big male leopard asleep on a branch, I report back after an exhilarating two-hour late afternoon jeep ride through Rajiv Gandhi National Park (better known as Nagarhole), sun-drenched and lush, 600-odd square kilometres of carefully protected wilderness. I also saw a pack of wild dogs or dhole, their faces rapt with concentration, their senses probably attuned to the large herd of spotted deer we’d passed a few seconds before. “That’s a good show,” says Ashwin Pinto, the ever-watchful GM. “You caught two of the three predators.”

I didn’t catch the third one but then tigers are reclusive. The sanctuary is doing much better tiger-wise than its counterparts further north and the animals have enough food — deer, sambar, gaur — and approximately 10 square kilometres of forest each. Sometimes, though, that isn’t enough. In a parting in a thicket, Sukanta had shown us the disappointingly empty cage in which the Serai staff has been trying to capture and send back to Nagarhole the tigress who roams the resort grounds. Despite the bait of one of its favourite snacks — a stray dog — she isn’t obliging.

You could go to the Serai not knowing your macaque from your langur and come back an incipient naturalist. The resort organises boat and jeep safaris every morning and evening, as well as nature walks. For those more inclined towards water, there are kayaks and pedal boats. For land creatures there are bicycles for hire. For those too lazy to move, there is the Oma spa.

On my second day at the resort, a large contingent of tourists arrives from China and it is house-full. Despite that, wandering about on the almond- and cotton-tree shaded walkways, you only rarely bump into fellow guests and the Serai still seems more or less yours. The only place where things seem to get animated is the restaurant, though I find it hard to work up excitement over the buffet. The over-familiar mix of Indian and Chinese with a daily token pasta thrown in doesn’t do justice to the Serai’s sensibility. There is something decidedly weird about eating deep-fried chicken lollipops after a day of being encouraged to harmonise with nature. The South Indian fare feels better, and now and then some lovely Salem egg curry or aurekaikurma did show up. Perhaps the Kabini Serai will one day complement their admirable sensitivity to regional flora and fauna with more extensive samplings from the kitchens of the local Homo sapiens. 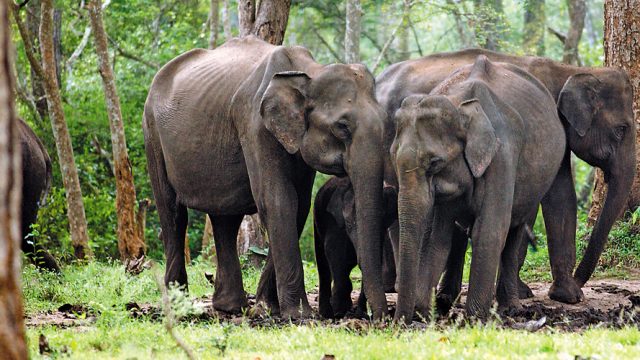