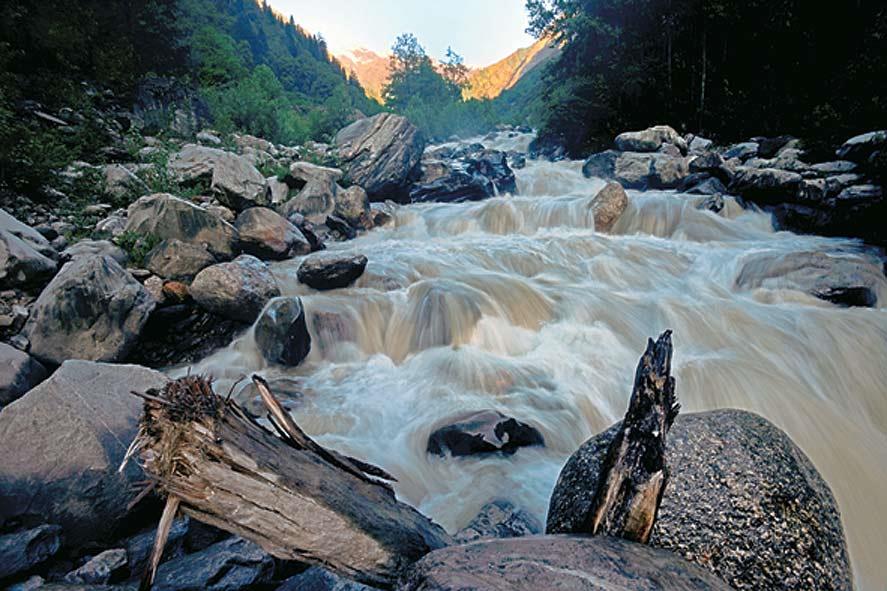 The Khirao Ganga at sunset. The river marks the trail up to Panpatia for the first two days of the trek, its frothy waters a hint of the steepness of terrain to come. 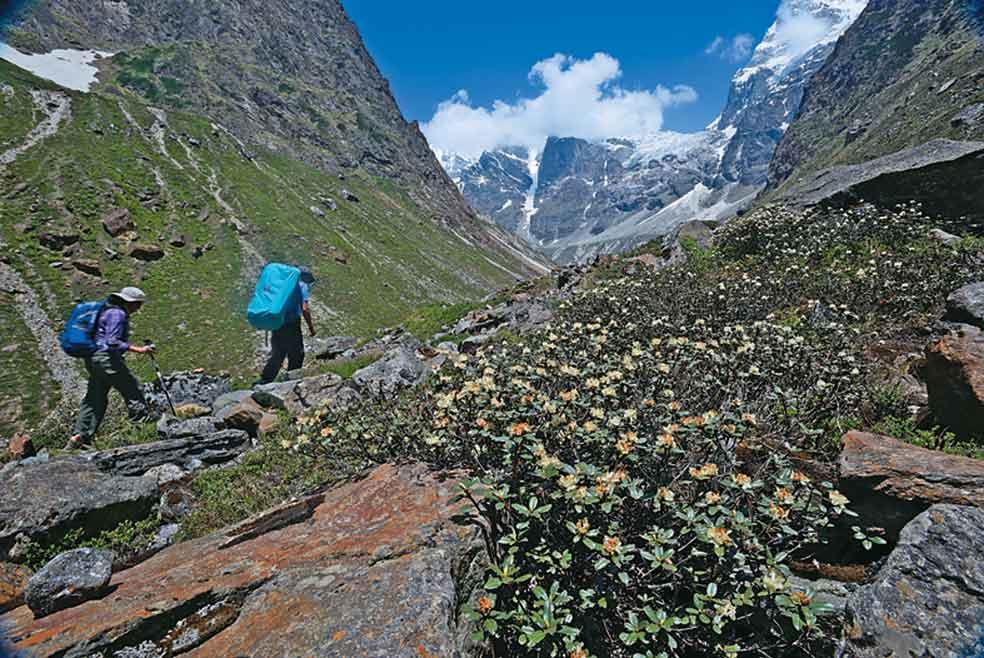 Members of the team walk up past blooming rhododendron bushes stunted by the lack of oxygen just below the treeline. 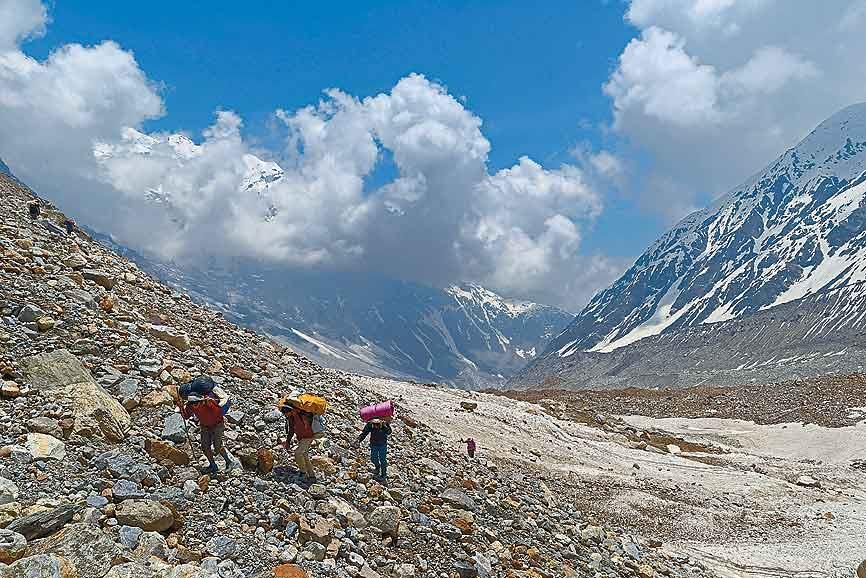 Porters make their way up the moraine on the lower Panpatia glacier. Progress is slow and painful on this stretch, with patches of snow offering some relief from the endless sea of loose rock and boulders. 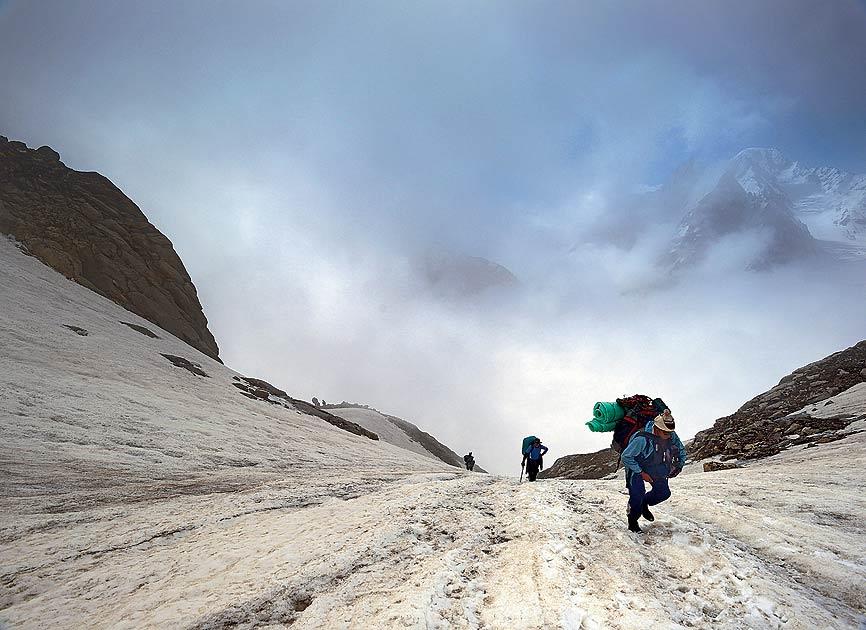 Sundar, our guide, leads the lung-busting climb up the flank of the Parvati icefall. Its treacherous terrain was made doubly dangerous and thrilling by bad weather. 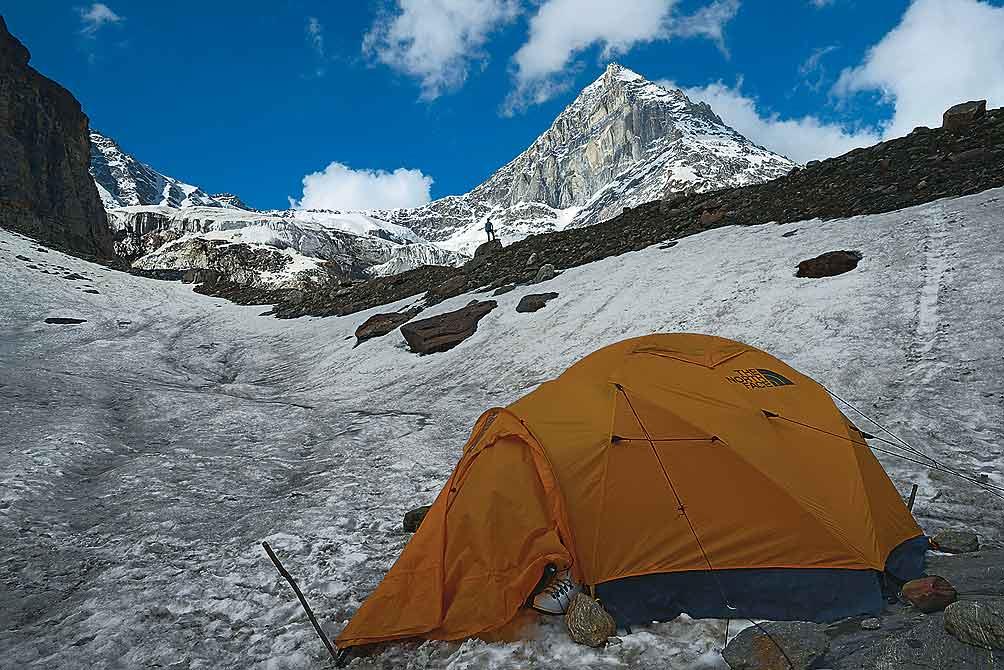 A seasonal snowfield at the base of the Panpatia icefall offers glorious views of Neelkanth and other higher peaks to those who are willing to trudge up the ridge behind it. During our stay there, we alternated between taking in the views and worrying about the underground streams that were chewing through the snow throughout the day. 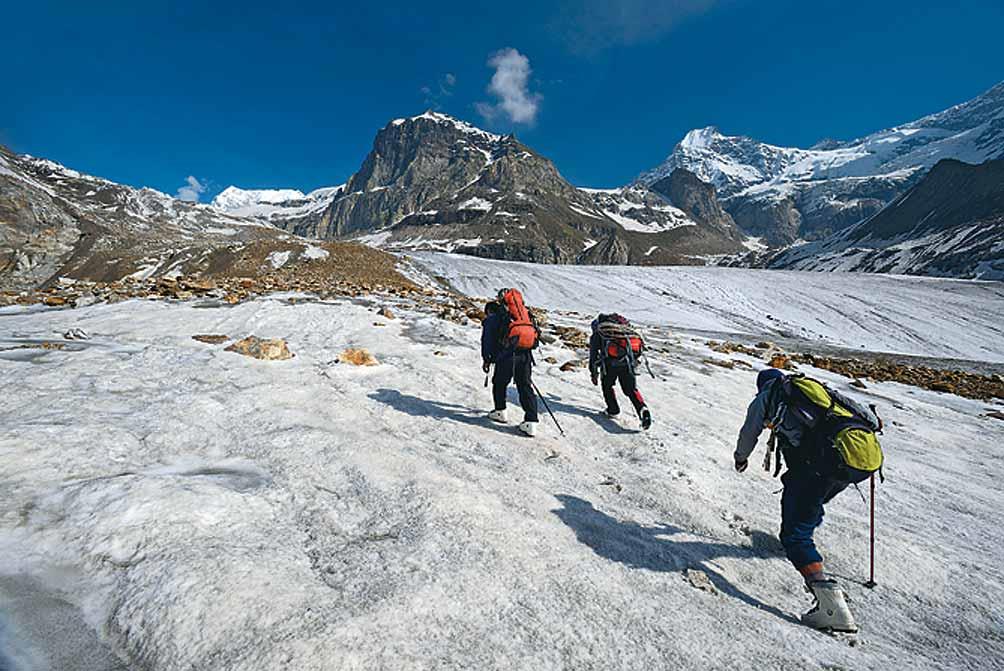 The Mingma brothers and Ang Dorjee, the Sherpas in our group of climbers, set out across the upper Panpatia icefall to scout the way forward. To the right of the frame rises Neelkanth. 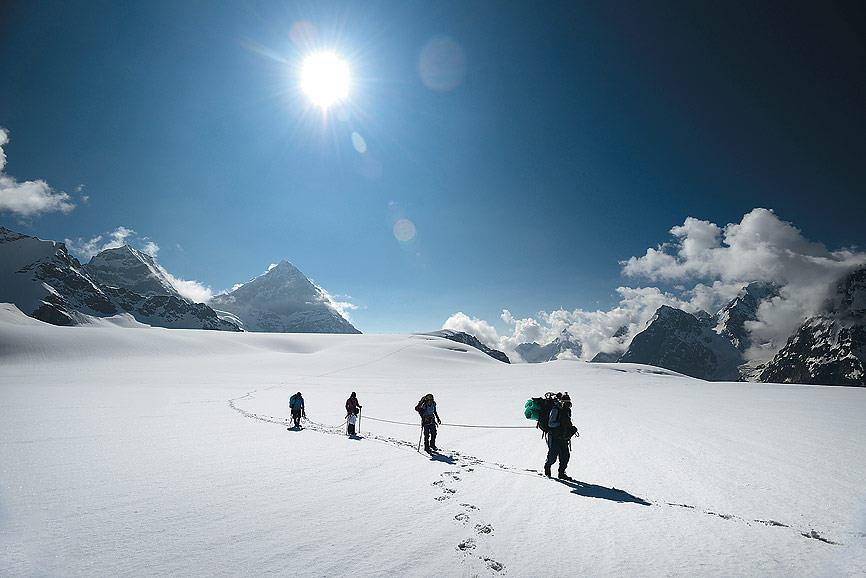 Roped up as a precaution against slipping into crevasses hidden by snow, the expedition marches across the Panpatia snowfield. Ringed by towering peaks, the snowfield is a dream to walk across on a clear day. Its nighmarish avatar came to the fore on the second day when we battled mad winds and blinding snow, with not so much as a pebble to hide under. 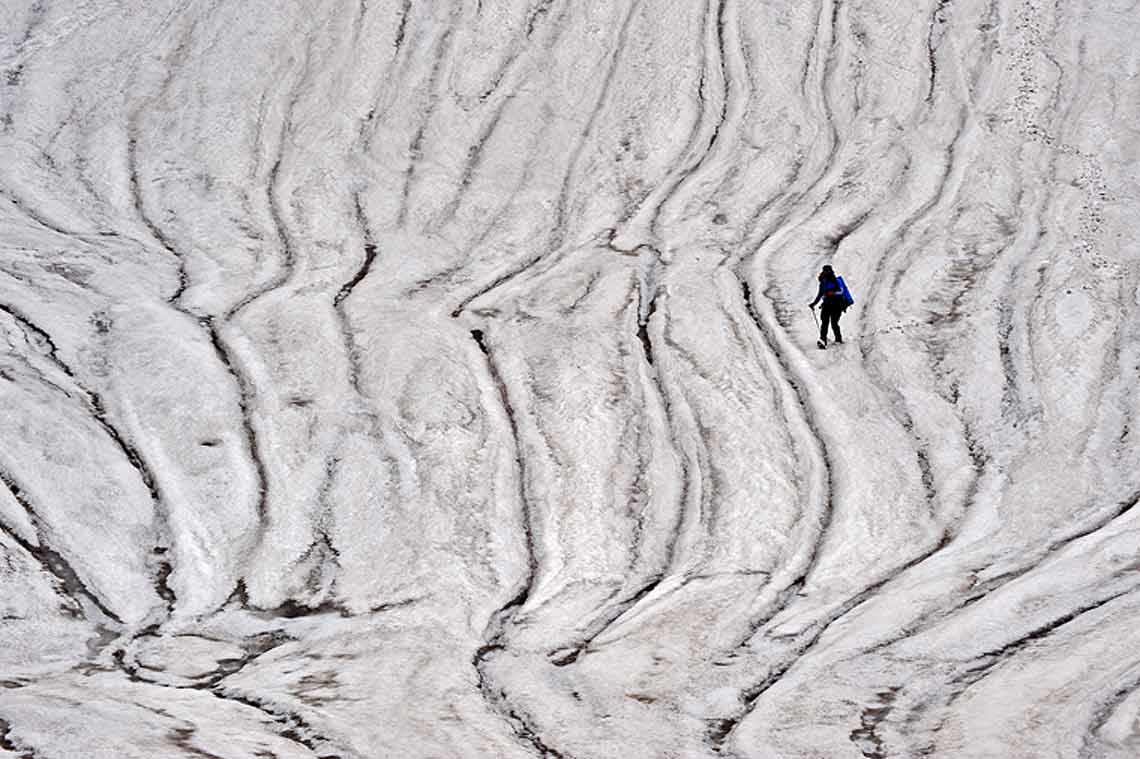 Avilash Bisht makes his way down the Panpatia Col, negotiating slushy ice and channels of snowmelt. 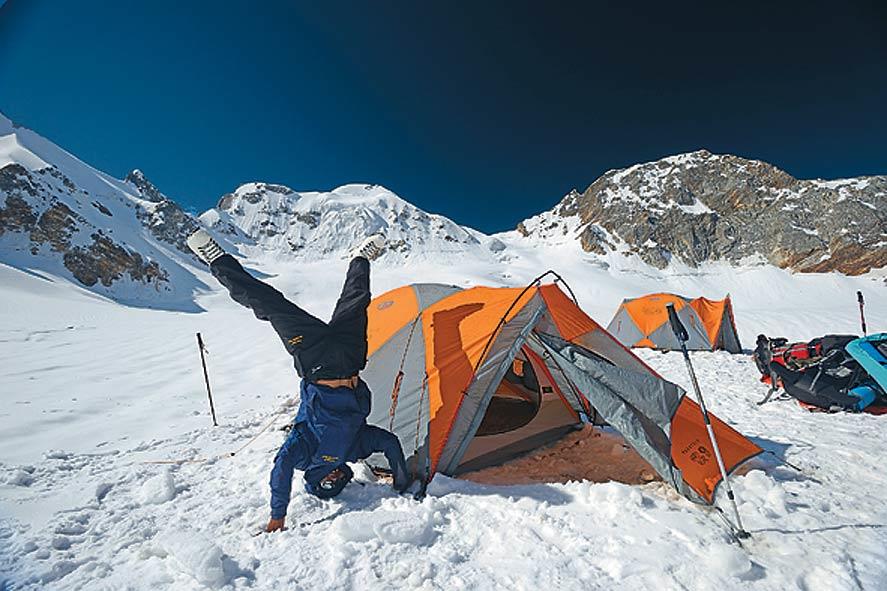 Ang Dorjee shows us how he feels, now that we have crossed the Panpatia Col (hidden by the black outcrop of rock in the background), and by the prospect of heading out of the realm of snow and into flower-filled meadows in the next couple of days. 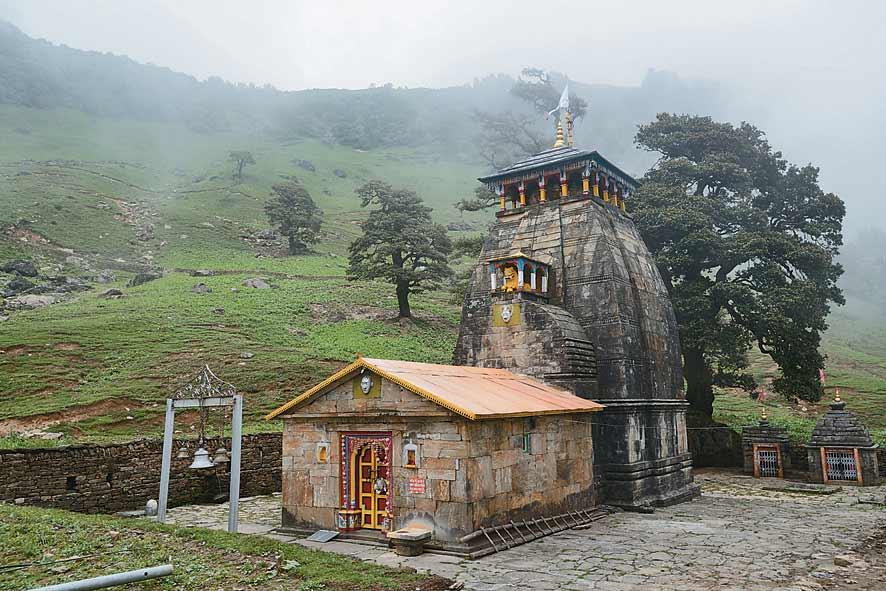 The Madhmaheshwar Temple. Also called Madhyamaheshwar, this is one of the most atmospheric and remote of the Siva temples of Garhwal. 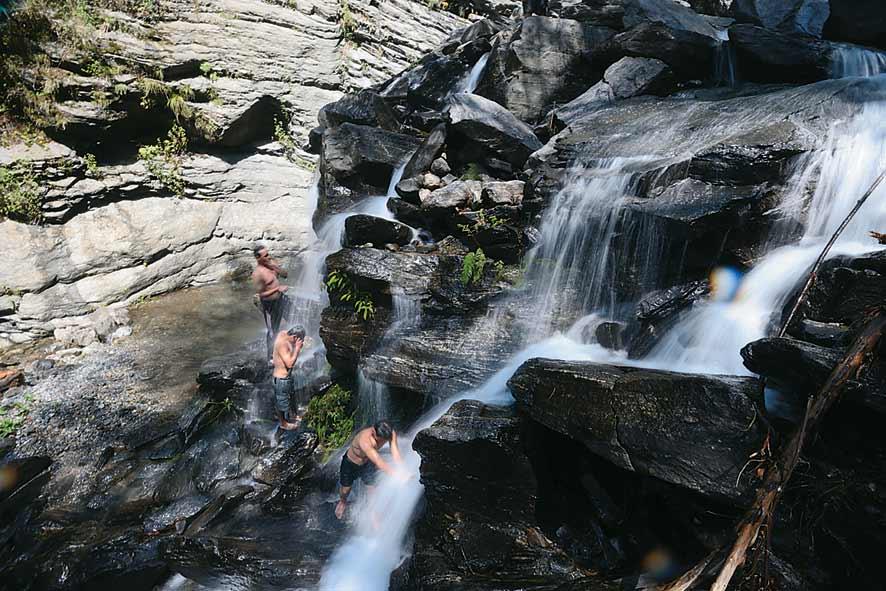 On the way to the village of Ransi further down the Madhmaheshwar Ganga valley are a series of waterfalls that offer the perfect excuse for a much-needed bath before greeting humanity once again.
BadrinathGarhwalIndiaKedarnathMadhmaheshwarPanpatia ColPanpatia GlacierPhoto FeaturetrekkingtreksUttarakhand