Across the river, the forest was quiet and unruffled, full of promise in the morning light. The

previous evening I had arrived at our well-appointed riverside camp in time for sundowners. For company, I had Siddharth Biniwale, a naturalist with the Reni Pani Jungle Lodge. He had a quiet manner, which suits me fine when I have an Indian jungle to absorb.

The central Indian forest has a tremulous beauty that is particular to it, the trees all shimmery green, the grasses golden in the wind. The Satpuras in particular pack an astonishing range of vegetation, ranging from dry deciduous to moist deciduous and semi-evergreen. The ride from the lodge to the campsite, therefore, served as a delicious scoping out of the terrain, and Siddharth’s interest in geology added an illuminating new layer.

As I downed my last drink, the sun slipped away below the horizon. This was our cue to set off again, on a safari cloaked in darkness. Night safaris are underrated because people think you’ll hardly see a thing, but the truth is that it is only at night that the forest truly comes into its own. Having a powerful flashlight helped, and soon we were spotting rabbits and deer at regular intervals. My luck with large-mammal sightings isn’t great, so I wasn’t prepared for what the Satpura National Park was about to throw at me. I don’t think the park was prepared either. Given the complex topography, in the Satpuras they don’t focus on the big mammals when it comes to wildlife tourism, much less the big cats. And yet, shortly after we had set up a camera trap on a tree trunk, we spotted her, a leopardess ambling along on the road ahead of us. As you may know, these spotted cats are notoriously difficult to spot. But here we were, feasting on our find, following her for miles as she went about tracking her wild boar dinner. I’m glad they’ve not gotten sucked into the quagmire of big-cat tourism in the Satpuras, but no one can avoid the thrilling sensation of encountering a top predator in the wild.

Spread over a 500-sq-km area, the Satpura National Park is a decent-sized park by any standard. It’s surrounded by several other sanctuaries, most of them not notified for tourism, making this one of the largest and most pristine swathes of jungle in central India. And so, on that magical morning we were full of gratitude and wonder, as we took off our walking shoes and waded across a shallow part of the river. The dense treeline fronting the river stood sentinel- like in the mist. Once we’d gone past, we saw what it had been guarding: a large grassland. There used to be a village here, before it was shifted outside the national park. The forest had long taken over and, sure enough, we ran into several tiger pug marks. Fortunately, we did not happen upon the owners of said pug marks, although we were mildly prepared, Siddharth having briefed us on what to do if we encountered any big mammals while walking (‘stoop and you shall not be conquered’ was the gist of it).

We walked along a stream shaded by tall trees, where I promptly lost my balance and wet my shoes. Later, drying them on a large rock over a picnic of sandwiches and juice, we spied some kingfishers, including a particularly rare one, and the flashy scarlet minivet. We spent a long time observing the feeding habits of the Malabar giant squirrel, the Satpuras being its northernmost habitat. There were deep scratches on a tree where a sloth bear had tried to climb up. Back at the camp, I had the pleasure of taking an open-air shower, the water hauled up with a nifty pulley system. On the way back to the lodge, we dropped our tracker off at his village, the pretty Gond houses gleaming in their fresh coats of mud.

It had been an invigorating but intense trip so far and Siddharth needed to rest, so that afternoon Erwin D’Rose, another of the lodge’s naturalists, took me kayaking on the Tawa Reservoir. It looked like an amazing body of water to me, but Erwin assured me that it was a pale shadow of its former self. Water is so central to life in the Satpuras that many places here are named after it (including the village of Reni Pani, where the reni bush proliferates). There were a plethora of birds to ogle at, including some revered visitors, like the bar-headed geese from Ladakh. The Indian skimmer, however, proved elusive.

Back at Reni Pani, there was news. A leopard had been spotted in the vicinity of the lodge in the last few days, they informed me with barely disguised delight. Just the sort of thing to make a city-slicker’s hair stand on end, so I hid in the comfort of my cottage-fortress till dinner time.

Reni Pani is tastefully discreet, its architecture inspired by the local Gond style. The cottages are spacious, the grounds a veritable forest in their own right. Every attempt has been made to blend in with the surroundings. In fact, at night, the lighting is so low, they actually send someone to escort you to dinner, a service for which a wuss like me will be eternally in their debt. The meals, which are excellent if unpretentious, come in courses. The guests are often oblivious, busy swapping safari stories. Conversations around the dinner table can range from the mating habits of Indian wild dogs to the astonishing flora of these parts. Sometimes there’s a presentation in the library before dinner. Reni Pani is unique among jungle lodges in being run by naturalists, not hospitality professionals (all the service staff are locals), and so nature and wildlife are very much the focus here (okay, they do have a spa and a pool). I don’t need to tell you that the naturalists are amazing; there is not one question I threw at them that they did not have an answer to. The proprietor, Aly Rashid, of the Bhopal royal family, is a distinguished naturalist who leads from the front. I did not have the pleasure of meeting him, since he was away conducting one of his popular pop-up expeditions, this particular one to view snow leopards in Ladakh.

We saved the jeep safari, the default Indian jungle offering, for my last morning. This was the only part of the trip I was a little lukewarm about, because what safari atop a noisy metal monster could possibly equal the thrill of being on the ground, right with the sights and smells of the forest? But it swiftly came close in terms of the experience, and then simply raced ahead.

A herd of chital early in the morning

A pre-dawn ride in an open jeep, but with cosy blankets and hot water bottles for company, brought us to the Tawa jetty again. Once we had been ferried across the water, our safari jeeps were waiting for us, many of them donated by the lodges in the area (including our beloved Reni Pani, of course). With an extremely limited number of vehicles allowed in on a daily basis, we rarely encountered another jeep, so it turned out to be an intimate and unhurried experience. We saw it all. From sloth bears to herds of deer and wild boar, the lone gaur in the distance, the monkeys, the joyous birds.

A tigress makes a rare appearance

We had been admiring a grey-headed fish eagle next to a waterbody when the call came. A tigress had been spotted near a nallah. A second later, our driver was a changed person. Suffice it to say, I have never been transported over such undulating terrain in such a short period of time, and may I never have to do it again. It was totally worth it. The tigress had waited for us, and gave us several thrilling minutes of viewing before peeing copiously against a tree trunk and slipping into the bushes. If you’re a wildlife buff, that’s what wet dreams are made of.

Getting There
The Satpura National Park is a 3.5hr/130km drive from Bhopal. Bhopal is well connected by air, rail and road to major Indian cities.

Where to Stay
In recent years, the Satpura National Park has seen the blossoming of several boutique jungle lodges. Among these, the Reni Pani Jungle Lodge is second to none. Located in a pristine forest typical of the Satpuras, it gets its name from the neighbouring tribal village. The lodge features 12 luxury cottages encompassing three distinct architectural designs. The nallah units, the forest units and the hill units are all built using local/indigenous material and are characterised by viewing decks, large lounging bay-windows and luxury bathrooms. The ‘Gol Ghar’ or meeting place has a unique design, featuring a dining area, a bar, a library and a lounge set in its various corners. Tariffs start from ₹18,000 per night (room-only rate, valid till June 30, 2018, taxes extra; +91-9981997714, 9407557596, renipanijunglelodge.com). Additionally, you can purchase an F&B package for ₹4,000 per person per day (tea/coffee, all meals, taxes extra).

What to See & Do
> In the Satpura National Park, game viewing is possible by jeep, jungle walks, elephant safaris and by boat, which makes it unique among Indian parks. Although, given the dense vegetation and topography, viewing of big mammals is not promoted aggressively, you can get lucky. If not, the plethora of birdlife and flora will keep you engrossed. Although there are concerns about the depleting water level, boating on the Tawa Reservoir is still a magical experience. You can do it on a kayak as well, which is a bit of a balancing act.

A mobile camp set up on the dry riverbed of the Denwa. Glamping doesn’t get better than this

> Reni Pani Lodge’s ‘Satpura Under Canvas’ is a unique mobile camping and walking expedition through the Satpura forests. The programme allows you to camp in the middle of the forest with all mod cons, but with no ecologically harmful footprint. There is probably no better way to experience the forests of central India. A popular campsite is on the dry river bed of the Denwa, and you can opt for a night or two of camping, to get a taste. More immersive is their 2N/3D Pachmarhi Trail, which retraces Captain James Forsyth’s historic route. The programme attracts a supplementary charge over and above any jungle plan you may have purchased.

> The Bhimbetka caves lie on the drive route from Bhopal, and it’s a great idea to stop by for a dekko. 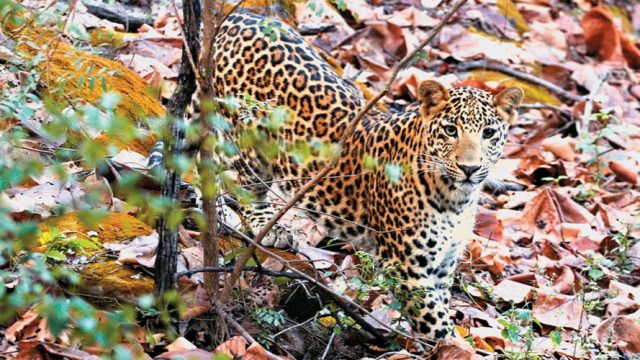 Located in the densely forested Pachmari plateau, Satpura is one of Madhya Pradesh’s premier parks 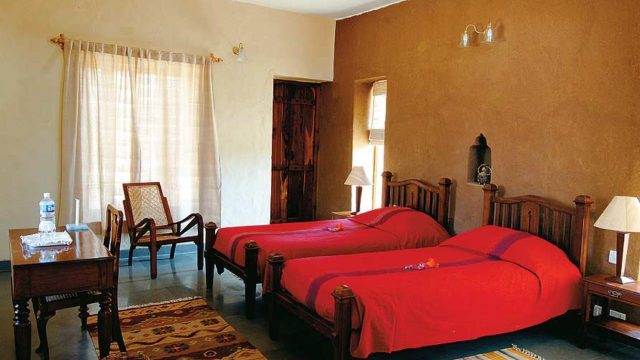 In the magnificent Satpuras, a new forest lodge and comes away renewed