The High Court issued an order on June 18, 2018 (Monday) directing the government of

Uttarakhand to enact strict regulations on all adventure and water sports in Uttarakhand. Until the implementation of suitable regulations and policies, a ban will be maintained on all aforementioned activities. This move by the High Court comes as a tough blow to adventure tourism specifically in the state.

According to a news report, “Paragliding is equally dangerous if not regulated. The water sports in big lakes like Tehri Dam can prove fatal. These are required to be regulated,” said the Court. The HC stated that river rafting and paragliding are permitted even without fixing the minimum rates and display of the same by organizers. Taking meticulous notes on the number of deaths which take place every year because of such life-threatening activities, the Court has mentioned strict orders to employ only highly trained professionals to lead such sports. It also serves as a hard hit for those who depend on the adventure tourism department for their employment. Kiran Todaria, President of the Indian Association of Professional Rafting Outfitters (IAPRO), says at least 300 rafting operators are active along a 36-km stretch of the Ganga. “It’s an industry that provides indirect jobs to no less than 10,000 families,” she stated.

The Ganga, according to a PIL filed by a resident and social activist based out of Rishikesh, sees sewage flow and float directly in the river which corrupts its sanctity and makes it dirty. Leading to added traffic and pollution which is exceedingly alarming, it was also observed that camping sites have been permitted to be set up near the tip of the river beds. Pollution Board reports have also studied how plastic waste has increased ten folds and will keep rising, should there be no intervention from the higher government authorities.

With a proper law around the corner, the High Court order also states that, “…There has to be a transparent procedure for inviting the applications after fixing the minimum rates for using the water. The state government cannot permit the use of rivers without fixing reasonable charges. The tourism must be promoted but it is required to be regulated.”

As a measure of protecting and restoring the environment, ecological balance as well as the people who take part in this sports, this order to ban all pumped up activities in the land that calls all adrenaline junkies is a let down for most. An implementation can also occur with the visitors going to Uttarakhand, by observing surveillance on themselves and having fun, responsibly. 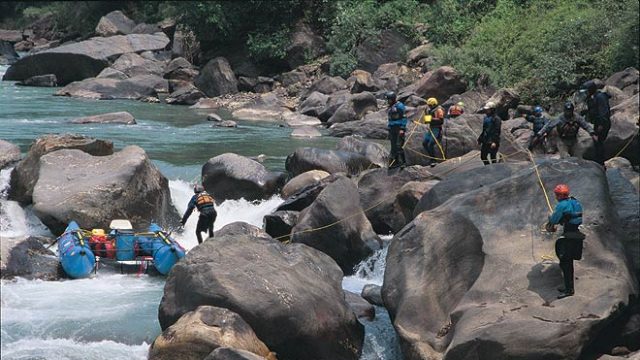 Whitewater rafting on the Tons River in Uttarakhand

The menacing rapids on the Tons River in Uttarakhand is meant only for experienced whitewater rafters.