As the plane descends over the Atlantic Ocean, I can’t get Ringo Starr out of my head.

“I like to be under the sea,” he sings, “in an octopus’s garden, in the shade.” We have flown a little over two hours from Lisbon and my heart skips a beat as I spot the stunning blue waters outside my window. There’s every shade of blue stretching out in all possible directions, the brilliant turquoise of the clear sky reflecting in the waters below and, as the plane begins its descent, I see below me the bluest of all—Lagoa das Sete Cidades, the sparkling twin lakes situated in the crater of a dormant volcano. Oh! Sao Miguel, I need to be with you soon.
Dinodia

Trekking up from the lake at Lagua Do Fogo

There are a couple of factors that brought me to the Azores Islands. Getting away from it all, of course. Also: I wanted a break in the journey home from NYC; I needed a bolthole untouched by modernity; and a last exotic holiday before I plunged back into life. I looked forward to quiet rural scenes, green pastures and the backdrop of a deep blue sea. I chose the Azores because it is one of the places I know of in Europe where tourists don’t flock, where the slow and quirky pace isn’t manufactured, and where people still stop to greet you.

Set in the middle of the Atlantic, almost 1,500km from any shore, the nine islands of the Azores, an autonomous region of Portugal, retain a lost-in-time feel about them. The archipelago is an unspoiled Eden of gushing waterfalls, purple hydrangea-rimmed roads, aquamarine lakes, waterfalls and sleepy hamlets and fishing villages. Craters, geysers and bubbling hot thermal waters remind visitors of this archipelago’s dramatic volcanic origins. The lush tranquil islands are liberally sprinkled with tea gardens, pineapple plantations and vineyards, interspersed with pastures for the cows that have strategic economic importance in this region. Best of all, word really hasn’t spread about how accessible this exotic paradise is.

There’s always some time for beer

Sao Miguel is the Azores’ largest island and, along with Terceira, easily the most happening places in the middle of the Atlantic Ocean. Not that this is obvious at first. On the road from the airport, Jaime Lindo Furtado, our Azorean driver-guide, points out ancient churches made of lava-stone, the local milkman juggling a big can of milk, while sitting side saddle on his horse, a form of transportation that is still used in the islands. Apart from tea and pineapple, yellow ginger lilies from the Himalaya have found their way to these islands and entire hillsides are covered with bright yellow. We drop our bags at the newly opened Azor Hotel at Ponta Delgada and take the two-hour drive along the rugged southern shore to Nordeste, a town so isolated it was accessed primarily by boat until some years ago. It’s still a thrilling ride as the road teeters along cliffs towering above the Atlantic. The empty coastline, rugged and green with dashes of pink, purple and white flowers, feels like our personal road leading to the scenic look-out point at Ponta da Madrugada— the place where land meets the sea.

Potatoes innocently laid out next to blood sausages

Azorean food and beverage is inexpensive and I am amazed at the variety the islanders can turn out. Blood sausage is their speciality and though I cringe when I first hear about it, I change my mind after tasting it. Azoreans have been making black or blood sausage for generations, and most locals have their own family recipes passed down over generations. Azorean blood sausage is different from others because of the special blend of seasonings, including local cinnamon. Then there is the common pineapple. Originally considered to be an ornamental plant, it took Azoreans a while to realise they could eat it too. The locals eat it in abundance, along with lightly fried blood sausage and pineapple appetisers to pineapple carpaccio dusted with cinnamon and washed down with some pineapple liquor. Fried mackerel and fried cod are some other must-eats in the Azores, besides the fabulous wine and local cheese. The best one, Sao Jorge cheese, is produced exclusively on the island of Sao Jorge. I didn’t have time to check out a preparation called Cozido das Furnas, a stew with layers of chicken, blood sausage, pork and beef placed in a large metal pot beneath a covering of cabbage, carrots, potatoes and other vegetables. The prepared pot is buried in the volcanic soil early in the morning to be slow cooked by the natural heat of the calderas before being unearthed later.

On the last day, we visit Lagoa das Sete Cidades, the magical crater lakes I’d spotted from the plane. The guide narrates the story of the princess and her shepherd who had to part ways; their emotional farewell to each other that featured plenty of tears is supposed to have resulted in the two lakes, one green and one blue, according to their respective eyes! Another stunning spot on Sao Miguel Island is the Crater Lake, Lagoa do Fogo. The ‘Lake of Fire’ area is covered with lush green vegetation and is perfect for hiking and exploring. When the volcano explosion took place centuries ago, I am told that the lava flowed for a few days and created a path all the way down to the sea. Here in the Azores, the weather is unpredictable, understandably so, when one has the Atlantic Ocean thrashing furiously all around you. You drive out from one corner of the island in foggy weather with dark clouds threatening rain, but just twenty-five minutes later, it’s bright sunshine and clear blue skies in another part of the same island!

Misericórdia Church looks perfect against the harbour at Angra Do Heroísmo

After the quick flight from Sao Miguel, my prayers for fair weather are answered on Terceira, which I am told is a very friendly place. I guess because it’s the sunniest. Local guide Pedro Alves drives us through the main town, Angra do Heroísmo, a Unesco World Heritage Site, and he points out some interesting things along the way—natural swimming pools by the sea, natural hot springs and a vineyard where the grapes are positioned over the lava rocks. I have tried out various Azorean wines by now and know that it is pretty good stuff, but the best wine comes from Pico, which is reserved for my next visit to the isles. Cobblestoned streets, fabulous waterfront locations and perfect weather I think are good enough reasons to be counted as one of the best seaside destinations—that’s Terceira.

Ti Chou is where we stop for lunch, a quaint, tiny restaurant in a small fishing village, run by two sisters—one the chef and the other the restaurant manager. We get a very warm reception and are served very traditional food, all cooked in-house, including the bread baked in the wood-fired oven that is in the centre of the dining area. Our meal is delicious and I tell them that I am from India and plan to revisit next year. Imagine my surprise when the sisters refuse to let me pay! No amount of persuasion helps. Yes, the people of Terceira are quite generous.

And then there is the Algar do Carvao. It is an amazing experience to get inside a volcano that erupted some 2,500 years ago. It feels eerie walking down the 250-odd steps to stand beside the underground lake, tiny specks of water dropping on me occasionally. The remarkable flora covering the cone and its crater includes many species of moss and ferns; in the deeper parts, there are various types of green algae and mould; and in the volcanic pit, a few species which are endemic to the Azores, like the local version of the beetle, centipede and millipede. To complete the volcano experience, little birds fly in and out, busy with the intricacies of their lives.

Each time we venture out anywhere on Terceira, something or the other gets in our way: a group of happy grass-fed cows, damp fog and low-hanging clouds. Just outside of Angra, a crowd of merry-makers, fortified with chilli potato snacks washed down with caipirinhas, are preparing for the local bull run, known as Tourada a Corda, which is a bull run, not a bull flight, traditional to the Azores Islands, and particularly the island of Terceira. Bulls are never killed in Portugal. The bull is led along the course of the road, and taunted and teased by players, but with no intention to kill the animal; the animal’s horns are capped with leather to diminish risk to the players. During the months of August and September, bull runs happen almost daily and are organised largely by the farmers and traders.

Too soon, I need to bid farewell to these magical isles. The sunsets that pour out from the sky over the biggest waves I’ve ever seen. Unearthly hikes in the most serene forests. I can feel the silence. Gardens where you can hear the flap of a bird’s wings, cows walking the roads, farmers on horseback…everything…slow. Everything green or blooming, the hydrangeas as big as my head. The Azores was a beautiful and peaceful something that happened to me.

Getting around
From India, a good way to connect would be to take Turkish Airlines to Lisbon and connect from there.

The easiest way to get from one island to another is to fly; each island, even tiny Corvo with its single village, has its own airport. Inter-island flights can be booked through SATA (sata.pt). There are daily ferry services (transmacor.pt) between Faial and Pico. Several days a week these connect with crossings to Sao Jorge, and there are daily sailings on this route from mid-June to mid-September. Sailing times vary; the crossing from Terceira to Sao Miguel, for example, takes six hours.

There is a good choice of accommodation on the islands. In Sao Miguel, I stayed at the new Azor Hotel on Ponta Delgada, a member of Design Hotels—and thus luxurious (from €110; starwoodhotels.com).

The main attractions of the Azores are their natural assets: the lakes of Flores and Sao Miguel, the craters of Corvo, Faial and Graciosa, volcanic peaks like Pico mountain, the highest in Portugal at 2,351m, and the cliffs of Sao Jorge. It is not much of a beach destination because of the black lava rocks. Whale- and dolphin-spotting is popular and, of course, the Azores have some seriously awesome dive spots.

What to eat & drink

Enjoy a typical Portuguese meal and wine at Mariserra Restaurante at Ponta Delgada, Sao Miguel. Another recommendation is Ti Choa at Terceira. Enjoy the wines of the Azores—they are interesting and inexpensive. Eat Sao Jorge cheese, it is legendary. 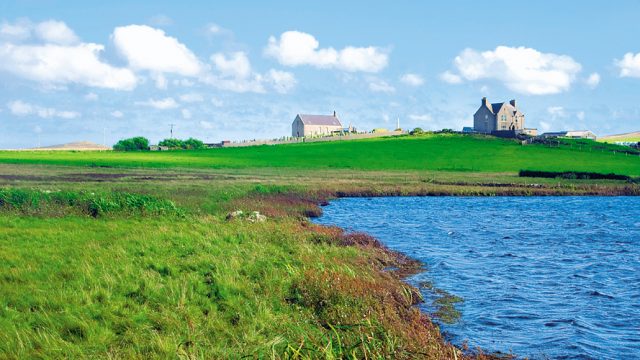 An exotic archipelago off the Scottish coast shrouded in mystery 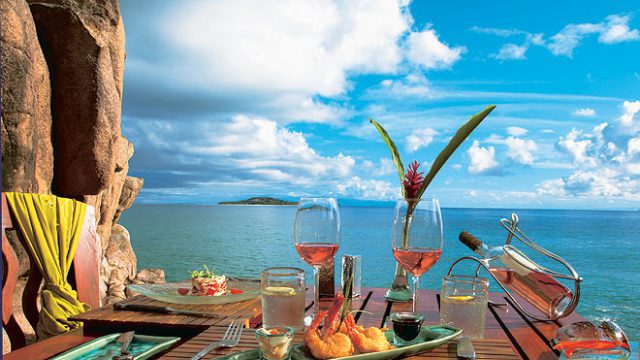 The archipelago is the perfect place to embark on a relationship or mend it with beaches, golf, beerâ?¦and romance