The moment I saw her I knew she was one of the travellers. There she was, in

a red leatherette chair in the lobby of the Zetter hotel in London, a middle-aged Japanese woman in a muted combination of beige and blue, variations of which would become familiar over the next few days. Emphasising the plainness of her clothes was her handbag — a tropical explosion of clashing colours. Her gaunt, lined face was drawn with exhaustion. Her head dipped with a jerk at times. But for anyone who cared to say hello, she gathered herself, summoned up a cordial smile and nodded vigorously.

I surveyed the lobby, reading strangers’ faces: which of them were to be my companions of the next week? We were 70 journalists, divided into groups of 10 or 12, dribbling in from different parts of the world. I could tell Miss Okinawa was one of us. Her resigned body language, saying “take me where you will”, marked her out as a veteran of group travel. More faces appeared. The lobby resolved itself into tentative friendliness, and a dozen of us trooped off to the Maze Grill, Gordon Ramsay’s ‘cheap’ place to lunch.

The Maze overlooks a leafy park in Grosvenor Square and offers you the option of booking The Butcher’s Block, which is the table by the kitchen. Here, you can sit and watch the chefs working at leaping flames, and — so as not to disappoint fans of Ramsay’s abusive manner — swearing at each other. Waiters in white aprons glided through the restaurant, bearing wooden trays covered with snowy napkins which they drew aside to reveal oozing boulders of raw meat for you to choose your exact cut. Delicate, ikebana-like arrangements of beetroot arrived at our table, steaks with roasted heads of garlic, salmon melting in mustard. Charlotte, a South African journalist, peered at the wine list and told us it was a good Rioja on offer. She made it clear that she was not easily impressed. But conceded this was impressive.

We walked to Borough Market, where Ramsay and his tribe do their food shopping. Under its vaulted roof is a church for gourmets. There was a French-windowed restaurant inside the market, buzzing with bankers at lunchtime. Wine and roasts flew fast and furious from kitchen to table. Outside, the raw materials waited: wild boar pâté, bubbling vats of mussels, bright slopes of fruit, barrels heaped with chocolate truffles, slow-moving lobster manacled by string, disk upon disk of cheeses — goat cheeses, Goudas, Stiltons, and the Stinking Bishop, so named because the cheese is washed in the Stinking Bishop pear’s juice. You can wander the market tasting bits and pieces, or buying yourself a streetside meal of roast duck or pancakes. “It’s great for tourists, not good for business”, complained a shopkeeper… “Tourists just look, they don’t buy, and the crowds have scared away regular shoppers.”

The Millennium Dome in early evening was a neighbourhood version of Disneyland. Boiled down to the fundamentals, it was an over-large tent that covered a shopping mall and an amusement park. We were headed for the British Music Experience, an exhibition at the O2 arena (exhibition and concert hall) in the Dome, which turned out to be the gig whose very thought killed Michael Jackson.

By this time we were all tired from our flights, ill-tempered and sleep-deprived. Even so, the O2 woke us up, restoring us with music. Talismanic skirts and shirts and drums stood in glass cases: the flute Ian Anderson had played! David Bowie’s costume! You could swipe your smart ticket on screens for information and commentary. It was a technological wonderland. The still flute in a glass case began to play in your ear, the voices of your idols materialised on demand. You could dance before a camera that recorded you and then played you back in 3D laser images. We discovered that most of the women didn’t mind looking like fools before a camera. The men did. And Miss Okinawa did. She had vanished.

The next day we found her, in a demure skirt and blouse ensemble. All the women were toppling about in very high heels in readiness for our audience with Prince Philip. Miss Okinawa wore sensible shoes. Her only sign of rebellion was that tropical bag. She spoke little, perhaps because of a language problem. Or she just preferred silence.

The 70-person group was herded into two red double-decker buses of the old iconic kind. They are now trundled out only for ceremonial occasions. People took pictures of us as we rode in them to Buckingham Palace. We hoped the Prince would make one of his renowned politically incorrect gaffes. A frisson of excitement rippled through the ‘seen-it-all’ hacks. One of them leaped towards Prince Philip with a birthday card (he turned 88 that day). The alarmed security guard plucked it out of the air and made it disappear.

We were taken through Buckingham Palace’s grand staterooms and art collection by its knowledgeable curators. Canalettos and Vermeers, a rare Rembrandt that was bought for a fortune in more prosperous days, when the Empire thrived. Now the hard-pressed Queen has had to throw the Palace open to visitors to raise funds for the repair of Windsor Castle.

It was Miss Okinawa, unexpectedly, who confessed boredom with the British royalty. She had just come out of the Royal Yacht Britannia in Edinburgh. The enormous yacht was more royalty-tourism: it was used by the British royal family for decades before being decommissioned and parked at the Leith docks in Edinburgh as a tourist sight. You can ogle Princess Diana’s bed and have tea on deck. But in the taxi back, Miss Okinawa expressed her first opinion: “The cakes were very dry and I did not find the yacht interesting.”

It was when we walked up a hill that gave a view of Loch Lomond that I saw Miss Okinawa come to life. Her camera emerged for the first time. She crouched to take pictures of the humming, flower-sprinkled woods, the dense green of it, and the still water of the endless lake. For the first time, she took off her jacket, revealing the defencelessness of her bony elbows and wrists. By now the rest of us had exchanged confidences, gossip and malice. Not Miss Okinawa. She had been with us each day only as long as duty demanded, said only as much as politeness required. I had to know about her. “What do you like to do, Miss Okinawa, in your spare time?” I demanded. She looked startled. She had been interrupted, but betrayed no irritation. She switched her camera off and considered, “Travelling. I like to travel.” After a pause, as if confiding something very private, she added: “And I play golf. On weekdays it is cheap to play golf in Tokyo.”

London in summer had a festive feel. People smiled, flowers bloomed. At Regent’s Park’s rose garden, the arches and arbours drooped with roses of many colours and maddening scents. You can pay to get a rose hybrid manufactured for a special occasion. Strollers crowded the South Bank of the Thames, which is fronted by a row of great theatres, museums, second-hand bookstores. It was a beautiful, buzzing city.

And yet there was not one person among us who did not rejoice when we reached Scotland. The pace grew more relaxed, the air was sweeter, the hills and lakes were within reach. On our train journey to Edinburgh, brilliant yellow fields of rapeseed and curving seacoasts flashed past. Something inside all of us loosened to let us breathe easier. We inched towards friendship.

In Edinburgh’s extravagant beauty, the real world felt far away. Every street looped into unexpected and interesting corners. Museums, theatres and castles lay waiting. As if to add to the grandeur, we were staying in a few miles out, in Dalhousie’s castle. Dalhousie, whom we know in India from our textbooks as the usurper of our Koh-I-Noor: how infinitely bizarre to lie on a canopied bed in his home. It saw battles and conspiracies, Cromwell laid siege here in 1648. My window, framed with tasseled curtains, overlooked hills of improbable greenery. Hares came out to play in the meadows. A hushed silence enveloped the place and a mist crept in through the tall, leaning trees. Every room was different. The honeymoon suite had a stone-vaulted ceiling and a watery well at the foot of its bed. In the chapel, white roses were everywhere, for a wedding the next day. The dungeon had a long white dining table pierced with scarlet roses. We felt compelled to dress in silk. At dinner we talked of love. Would each one of us find it? And keep it?

Daylight couldn’t drive the sense of fantasy away. We went to the Glengoyne distillery to see how single malt whiskeys are made, and found babbling brooks, rhododendrons and a quaint house. It looked nothing like a factory. We learnt how whiskeys are fermented from barley, distilled and then aged in casks that have contained sherry before. How over the years it lays aging, breathing in the scents of the surrounding countryside through the porous oak of the casks, how water from mountain springs provides a whiskey’s distinctive character. We each blended a whiskey. I drank my own-made blend a million miles away, back at home and felt absurdly proud.

We got light-headed tasting and re-tasting our blends as we mixed them. It was almost time to part. We knew we would never see each other again. A Canadian began to speak of her fears of not finding work. The acerbic Charlotte confessed her dread of eating dinner alone. Only Miss Okinawa leaned her head back, saying nothing. She shut her eyes and smiled to herself. The lines on her face dissolved. 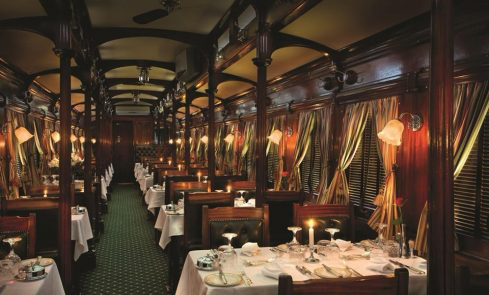