Home » Destinations » Features » Of The Moais and Men of Easter Island

There was no telling where he was looking. I hauled my backpack and camera bag to the

far end of the platform, and could still sense his eyes on me. Further afield, three seniors stood examining his face. Their body language seemed to imply that they too could feel his gaze. Over five metres and with a top knot to boot, his was a presence hard to ignore. There were other moais along the Ahu Tahai site but he was the only one on the whole island that had eyes. They are no longer made of coral, as they used to be, but that searing stare is enough to help envisage the power that the gaze of hundreds of moais would have once wielded over this enchanted land.

An amalgam of Polynesia and Latin America, Easter Island is one of the remotest populated islands in the world. It is a part of Chile, but the closest inhabited land mass, the Pitcairn Islands, is over 2,000 km away. If Easter Island’s remoteness wasn’t intriguing enough, it is dotted with nearly 900 massive human figures or moais and it is these mysterious stone monoliths that are its well-deserved claim to fame.

The Ahu Ko Te Riku with its lone moai

Touching down from Santiago at the main town of Hanga Roa in the morning, we were greeted by sights that were hardly extraordinary—families picnicking on hillocks, youngsters frolicking on the beach, dive companies soliciting tourists. It was textbook Polynesia, but with one difference. The quotidian activities of island life were being played out under the imposing aura of the moais—in singles and in multiples, they loomed large all over the island.

The moais date to somewhere between the13th and 16th centuries, and are found on elevated platforms or ahu across the island. Being closest to Hanga Roa, Ahu Tahai, the area around the eyed moai, is one of the most visited platforms on the island. The photogenic silhouettes that its moais cast against the light of the setting sun are another reason for its popularity.

A bowl of ceviche

Our moai viewing was spread over three days, leaving us time to sample the island’s famed seafood. Tuna is a local speciality and is served up in numerous delectable ways from ceviche to curry. There is no dearth of elegant clifftop eateries where one can enjoy the day’s catch, with views of the ocean and sips of the local tipple, pisco sour.

Local man Jojo guided us through the ahu, putting together the moai puzzle as it appeared before the pieces were thrown hither and thither by vandals. For every moai that now stands repaired and upright, ten others lie decapitated and dismembered, awaiting restoration.

Like much of history, the story of the moais treads a fine line between history and mythology. It is believed that the statues were commissioned by families to venerate a deceased head of a clan. Their size and grandeur was meant to correspond with the wealth and social standing of the clan.

The Rano Raraku volcano, from where the moais originate

The Rano Raraku volcano is one of the highlights of the island. This is the birthplace of the moais—where festival they were carved from volcanic ash. Theories abound about how the moais were transported to their ahu, but the consensus is that they were moved upright using ropes. Moais that did not make it to their ahu lie scattered around in varying stages of completion, considered to be mere stone edifices. It is on installation atop the ahu that the moais are believed to take on magical powers and be elevated to an otherworldly status. The ahu are close to the coast and most moais face inland, as though keeping a watchful eye over their land and legacy.

Amid the moai viewing, we grabbed an opportunity to visit one of the many guava plantations in the area. The orchard was heaving with luscious fruit, and we unabashedly filled belly and bag to capacity.

Ahu Tongariki on the south coast of the island is the best place to appreciate the scale and range of the moai project. At this ceremonial site stand 15 majestic moai on the largest ahu. Ravaged in turn by man and nature, this restored site has moais of varying sizes and detail, and is a testament to the carvers’ technical mastery.

The tradition of building moais continued until newer powers began looking askance at it. A battle for supremacy ensued and a new order was created—the birdman cult. This cult was associated with the last stop of our island circuit, Orongo, and seemed a logical transition from the moai spotting.

The contestants for the annual birdman competition were heads of different clans chosen by local shamans. Each contestant appointed an acolyte, a warrior of sorts called hua, to compete on his behalf. The competition required the huas to descend the cliffs of the island, swim to the tiny islet of Motu Nui more than a kilometre away, and bring back the first egg of the sooty tern bird. The hua to first accomplish this would be the winner, making his master the birdman or the Tangata manu. The birdman, thus attaining a demigod status, would shave his head and live in seclusion for most of the year. The ones to actually benefit were his clansmen, who were given priority access to the best of resources. And, of course, the winning hua  would be married to the island’s most alluring maiden.

A smiling boy at a cultural festival

At Orongo, the ceremonial village that was once the site of the contest, the stone houses that were occupied by contestants stand impeccably restored, as though frozen in time. Vivid petroglyphs indicate the gravitas the birdman commanded. The islet of Motu Nui appears deceptively close, hiding within its craggy surface tales of broken eggs, bruised egos and dead huas. The sooty tern, however, no longer visits Motu Nui, perhaps settling for a less bloody islet to raise its young.

While the repair work undertaken with the efforts of archaeologists like William Mulloy and support from countries like Japan has restored Easter Island’s moai glory, it is in the Father Sebastian Englert Anthropological Museum that the loose ends are finally tied up. It is also here that one gets to see a specimen of the original coral moai eye and the only distinctly female moai, of which there were said to be a dozen.

Deifying men through stone statues and elevating them to supernormal status by way of perilous contests may be in the past, but manhood is still integral to Easter Island’s narrative. Competitions testing masculine strength and endurance are still part of the culture, and are of the kind that would almost fall within the league of Ironman challenges worldwide. One contest, for instance, requires participants to source the material for a canoe, build one themselves, run downhill with it and then row it to victory. Jojo wistfully talked about his days as a strapping young athlete, while concurrently voicing relief at the relaxed standards in these competitions for men of a certain age!

A local woodcarver in Hanga Roa

Given the ubiquitous nature of moais, one can’t help but wonder what it was like for 6,000-odd Easter Islanders to live under the constant weight of so much history. Jojo says that while most locals acknowledge the monoliths as a valuable part of their heritage, they no longer believe the monoliths have any spiritual connotation or influence on their identity. That identity is attributed to the sense of kinship imparted by their shared Polynesian heritage, albeit one that is under threat of being lost amid the cultures and religions that have washed onto these shores since.

A traditional dance on Easter Island at sunset

Kari Kari Cultural Ballet is an organisation working towards promoting the island’s Polynesian culture. Their repertoire of traditional art forms gives young people, like Jojo’s daughter, who is a lead dancer in the ballet, a chance to stay connected to their roots. The troupe puts on a Polynesian spectacle that provides a welcome change from the hackneyed—be it dance routines that take us on a journey to a different era, or costumes that challenge prevailing notions of modesty.

With the alien influences and homegrown revolutions that it has borne, Easter Island has evolved into a worthy flag bearer for diversity. Its multiple names, Rapa Nui (Polynesian) and Isla de Pascua (Spanish) itself are a case in point. Today, Easter Island’s dominant vegetation of tropical fruit may be completely foreign, and its people part indigenous and part immigrant. However, its most commanding feature, the unassailable moais standing guard along its coastline, is wholly and distinctly its own—eyes or no eyes.

Getting There
Most major carriers fly to Santiago, with stopovers in the US or UK (transit visas are required). LATAM Airlines operates nine flights a week from Santiago to Easter Island. (Return fare from ₹30,000.)

Other options are Ethiopian Air from Mumbai & Delhi via Addis Ababa and Sao Paolo or Emirates via Dubai. (Return fare approx. ₹1,00,000.)

Where to Stay
If you do not plan to hire a car, it would be easier to stay in Hanga Roa, the island’s main town. Taura’a Hotel, where we stayed, and Hotel Puku Vai are reasonable choices with tariffs between ₹13,000 to ₹20,000 per night (hoteltauraa.com, pukuvaihotel.com). Outside of town, there are self-catering cabins to choose from. Cabanas Tokerau is an option with sea-facing rooms and sunset vistas (approx. ₹8,800 per night; cabanastokerau.cl/en).

At the super premium end is the all-inclusive Explora Rapa Nui (explora.com). The 3N package starts from ₹2,35,000 for double occupancy and is inclusive of lodging, meals, transportation and sightseeing.

What to Eat & Drink
Seafood in Easter Island is quite fresh. The speciality is tuna, best enjoyed as ceviche—a preparation of raw tuna cured in lime and mixed with a variety of condiments.

A traditional meal is Umu—meat and vegetables wrapped in banana leaves and cooked in an underground oven with hot stones. The local tipple is pisco sour—a traditional Chilean drink made from pisco (a clear brandy), lemon juice, sugar and egg whites. Homegrown tropical fruits and fresh juices are other must tries on Easter Island.

Moai spotting is the chief activity. Many people do so independently, but for a better understanding of the historical significance, opt for a guided tour. We chose Green Island Tours (gitourseasterisland.com). In warmer months, water activities like swimming, snorkelling and diving are popular. Spend an evening watching a showcase of local dance and music. A few companies put up performances on different days of the week. Ballet Kari Kari (₹1,600 per person) is highly recommended. 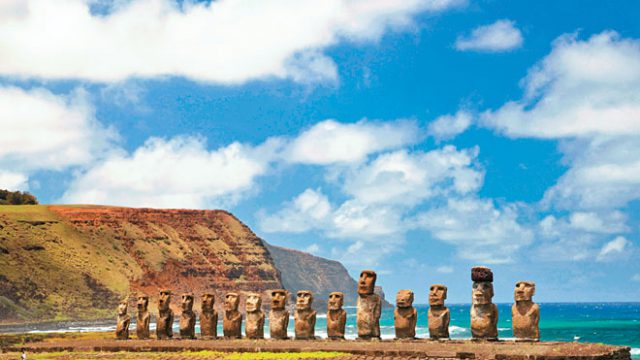