I enjoy fine hotels and good travel destinations and so on. So, being familiar with tourism and the travel industries, I know that these industries care a lot about perception. Tourism is in many ways about creating positive impressions, about making oneself feel good and, I’m sure, making customers and clients feel good. In light of that, some of you may find what I’m going to say rather jarring. Please don’t, however, interpret what I’m going to say as a criticism directed towards anyone in particular. That is not my intention at all. What I hope to do is to convey a realistic impression of the situation that we are all in, in relation to tourism, the climate and much else. Let me say also that much of what I’m going to say is supported by tourism industry analysts and specialists. There’s been the Djerba declaration by tourism industry professionals in 2003; there was the Davos Declaration in 2006. So, both these declarations accept that climate change is happening, it’s manmade and that it’s the greatest challenge humanity has ever faced. And climate change and human activity are inseparable, especially industrial and economic activity. So let’s ask, what is the tourism industry’s contribution to global greenhouse gas emissions?

Tourism is a very big industry. Some people say that it is the world’s biggest industry. It commands 10.4% of the world economy; 73.7 million jobs worldwide depend on tourism—2.8% of total world employment. India has a very small part of this. Total arrivals in India in 2013 were about 7 million people. The Louvre Museum had 8.5 million and the Eiffel Tower had as much as India. Venice had 9.8 million arrivals. In 2006, the number of international tourist arrivals was 846 million, spending $500 billion; 54% of this was in Europe and 52% of all the receipts stayed in Europe. So, as we can see, India’s share in this is very, very small.

Now, tourism contributes 5% of the globalcarbon dioxide emissions; 75% because of transport, 40% mainly because of aviation. This strikes me as something curious because in India we have a very long coastline and wonderful rivers, yet so little is invested in sailing, which is one of the most environmentally friendly forms of transport.

Now, if tourism were a country, it would be the 5th largest on a country list of emissions. So tourism emissions are a very big part of the global greenhouse-gas emission scenario. The founder of Rough Guides actually says now that “flying is killing the planet”. But tourism sector emissions will still grow 152% over the next two decades. So, as you can see, the growth we are speaking of will make a huge impact on the climate change scenario. Now, it’s wonderful to think of small sustainable tourism facilities, but if the person who’s going to make use of those facilities is going to take an airplane to travel there, then the footprint of the traveller is huge.

Of course, the scale makes a difference. Large hotels pollute more than those on the smaller scale. And, of course, luxury means more emissions. Now, we like to think efficiency will help. Unfortunately, this is not the case. One thing proven by one of the earliest energy economists in the mid 19th century, a man called Stanley Jevons, was the Jevons paradox, which states that greater efficiency leads to more emissions.

So energy efficiency is not going to solve this problem. Stopping all emissions today will make very little difference. Today, we’re seeing the impact of greenhouse gas emissions that occurred 20 years ago. So, emissions of today will impact world climate 20 years from now. Even if the whole world system would stop today, the breakup of Antarctic ice sheets would continue. So, that’s one aspect—the way tourism is impacting climate change. But what about the other way round?

To many, it’s surprising that this is possible at all, because we tend to see climate change as affecting polar bears and fishermen and not tourism. But tourism is a profoundly climate dependent industry, in that sense it is no different from agriculture. Why? Because tourists like good weather. Studies have shown that 70-80% European tourists cite a desire for better weather as the chief reason for tourism. And think of arrivals in India, which are extremely concentrated in winters—entirely climate dependent.

Let’s think of some of the ways ongoing climate change is affecting weather-related tourism. One sector directly affected is skiing. Europe has over 600 alpine resorts generating €50 billion per annum. But many European and American ski resorts don’t get enough snow anymore; they have to manufacture artificial snow. With a 2% temperature rise, which now seems inevitable, the Alps will lose 40 days of snow cover. Germany will lose 60% of its winter sports potential. Generally speaking, the Mediterranean coast will be the worst hit, as tourism shifts towards the poles. So Patagonia and Tasmania will have better climate, Russia better climate and these places are going to be more and more important in terms of weather-related tourism. In Asia, in these adverse weather conditions, Tajikistan is really going to flourish.

Other than skiing, beach resorts will suffer. We already see erosion in many parts of the world—rising sea levels mean beachfronts are being eaten away. But one thing we aren’t paying attention to is the changing sea flora and fauna, where overfishing and rising oceanic temperatures result in it catastrophically changing; we’re seeing more jellyfish, huge blooms of green algae. India is a subcontinent jutting out into the sea, with one of the world’s longest shorelines. However, on both sides, huge dead zones have appeared, anaerobic zones where water has too little oxygen to support any life. In the Bay of Bengal, a dead zone is 60,000 sq km in size. The entire business of sea tourism is going to be affected in multiple ways.

Another climate change aftermath is rain bomb events. We saw the 2005 Mumbai rains, Chennai floods in 2016, Houston 2016-17. These phenomena will affect tourism in unpredictable ways. As you saw in Uttarakhand, the rain bomb event killed so many people and wiped out an entire landscape.

Sea level rise, again, will have multiple impacts—it’s absolutely one of the certain climate change effects. We just don’t know how much it could be; maybe 2-3 metres. So many Pacific and Caribbean islands will disappear. One thing we Indians don’t account for is that the Laccadive chain is almost certain to disappear. Large parts of the Indian coast will disappear. To this day, it horrifies me when I drive around Goa’s coast and see these buildings going up right on the coast—all of this will disappear. Miami is soon going to be over, we already see flooding along the beach. The only way to deal with this is managed retreats. Some countries are doing so, but we seem to have no plan.

Another thing—coral reefs have huge global bleaching. The Great Barrier Reef in Australia is badly hit; 80% of it is badly bleached. Last year I went to one of the remoter parts of the Bay of Bengal, to the Mergui Archipelago in Tenasserim in Burma. This was once said to be one of the most pristine reefs in the world. I cannot tell you how badly it’s devastated. The only really healthy reefs are in Indonesia, because the seas around it are very deep. So you have upwellings of cold water that prevent the bleaching process from advancing further.

Another impact we will see will be glacial retreat. The Glacier National Park in the US will be glacier-free in the foreseeable future. Gomukh has been retreating for years, as you know. Tibet could be glacier-free quite soon. But one aspect of the glacier collapse scenario that we don’t talk about is the glacier lake collapse. Glaciers create these lakes, which are blocked by moraines. But these moraines soon break and lakes overflow. In Bhutan alone, 50 sites could have this collapse. Though, thanks to the last king there, great attention has been paid to climate change and preparations are underway. But, in Uttarakhand and Nepal, we can be sure there will be these glacial lake collapses and disasters accompanying them.

We’re living through the sixth great extinction in geological history; 40% of life forms could go extinct in the next 20 years. Already in Africa huge decreases in wildlife population have been detected. Along with wildlife, one of the major impacts we will see is desertification. Huge numbers of lakes around the world are drying up. India is particularly water-stressed. The most touristy areas are the most water stressed—Rajasthan, Gujarat, Hampi. So long-term tourism in these areas is really open to question. In Europe, there was a heat wave in 2005, which was centred in many big tourist destinations and we often don’t take account of the mortality rate—46,000 deaths. How will tourists cope with such a situation?

Satellite image of of central pivot irrigation fields in Ha’il in Saudi Arabia. Agriculture in this hyper-arid region is collapsing

But this is just the direct impact. What about climate change’s indirect impact? For example, as a driver of conflict. In the Mediterranean, there’s a 1,000-year drought that has impacted the place in many unpredictable ways. For example, it’s one of the drivers of the Syrian conflict. Egypt is a country I’ve known very well—I wrote my PhD on it. But it’s a collapsing state. There’s sea level infusion, the Nile Delta is sinking fast and the sea is coming further and further in. When I lived in Egypt in the 1980s, the population was 40 million. Today, it’s 95 million. And it’s this one river supporting all of it. It’s unsustainable.

All the refugee flows are also climate-driven. So many refugees going across the Mediterranean are from Darfur and Mali where agriculture has collapsed due to climate impacts. As an Indian tourist, would you be advised to go to Sicily or Lampedusa? I don’t think so. Because, what these events are also doing is creating huge amounts of racism inside Europe.

Lastly, indirectly driven by all these, is increase in terrorism. Of course, you can’t say terrorism is climate-driven, but there is a certain aspect of it that is related to climate. One thing that we see about contemporary terrorism is that it’s specifically targeting world tourism. Think of the Bataclan attacks in Paris; the murders at the temples of Hatshepsut in Luxor; attacks on air transport in the Red Sea region. I think this is something we’re going to see escalate in the years to come.

So, I think if I were in the tourism industry the things I would really need to think about is not just sustainability and so on, but very basic things such as insurance—how much longer is insurance going to be available to people in vulnerable conditions? In Miami, for example, they have trouble insuring their hotels. This will be the case in many beach areas. The second thing is safety. How would you guarantee safety to your guests from extreme events such as wildfires? Look at the way those are breaking out these days. They broke out in Indonesia to such a degree that it impacted Singapore, Malaysia and brought tourism to a halt in those countries. So I think these are really the issues that one needs to confront. I’m sorry for the really grim picture, but once you really start looking into climate change you realise the impacts you’re looking at in the immediate future are really frightening and there’s no way to make this look positive.

Celebrated novelist and non fiction writer, Amitav Ghosh, spoke on the impact of tourism on climate change as well as the impact of climate change on tourism at the Outlook Traveller Responsible Tourism Summit. This is the transcript of his speech. His latest book, The Great Derangement: Climate Change and the Unthinkable, looks at the urgent need to tackle climate change. 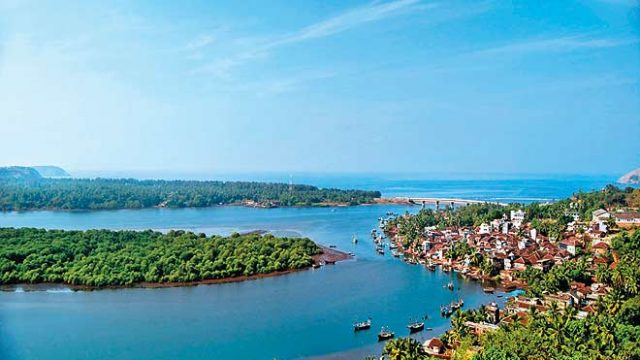 Known for its famous mangoes and its Burmese connection, thanks to Amitav Ghosh–s book ‘The Glass Palace’, Ratnagiri, with its glorious coastline bordered by bright green hills is an ideal weekend destination from Mumbai