Despite my eyes being wide open, the feast before me just doesn’t fit within my range of

vision. So how will it all go into my gut? Defying odds, I put aside doubts and begin stuffing myself. For starters, there’s the juicy Mother of God burger. The bun is barely able to contain the massive pork patty topped by spicy bacon, cheese and a fried egg. For the main course there’s grilled pork chops with alluring fat rind to add a bit of cholesterol to the calories, followed by a thin crust pizza baptized as pigizza that has a sinfully thick layer of bacon, salami, sausages and cheese. An epic burp rounds off my hogging feat. Total cost of pigging out: ₹930.

Any non-veg food adventurer can partake of this meaty dream at one of the newest restaurants in Madikeri town, Abeo’s Kitchen (Main Road, opp. Private Bus Stand), where Coorg’s famous pork scene is being reinvented by a young restaurateur couple with their Beatles-like slogan ‘All You Need Is Bacon’. The menu changes once in a while, but apart from the above-mentioned pork troika one can expect Eastern flavours—pork momos, pork noodles, pork thukpa, Szechwan pork fried rice, stir-fried pork in Chinese sauce, pork Manchurian, and Western staples such as BLT (bacon-lettuce-tomato sub), bacon omelette with ham, barbecued spareribs, pepper pork rolls, crumbed bacon and bacon-pork pastas; all dishes mostly in the affordable ₹100-250 range.

These are eclectic repasts, but pork is actually a highly traditional food in Coorg, or Kodagu as the district is known nowadays. It is generally eaten in the form of pandi curry, which ranks as one of India’s threemost famous pork dishes, alongside Goa’s pork-cum-pig’s blood sorpotel and Northeastern India’s porky bamboo stew.

Pandi curry is a semi-gravy dish of tender pork cubes seasoned with the signature black kachampuli vinegar. The vinegar, which is unique to Kodagu cuisine and is said to have a shelf life of ten years (and gets better, thicker, tangier the older it is), is believed to preserve meat, reduce cholesterol and kill stomach parasites, though according to food scholar K.T. Achaya’s learned books on Indian cuisine, its primary purpose is to keep the pork fat firm. To achieve the perfect result, pork is usually twice-cooked, first in a pressure cooker and then fried in a peppery masala, and purists would insist that it be had with kadambuttu(steamed rice balls) or akki otti(flat rice breads).

Kachampuli is an important ingredient in Coorgi dishes
Jyothy Karat

Pork-eating probably has its origins in the martial traditions of the Kodavas who provided India with a string of high-ranking military officers. Or as the menu at the popular tourist joint Coorg Cuisine states, “to fight like warriors, you must first eat like warriors”. In the olden days, wild boar was hunted as a means to protect the paddy fields and vegetable gardens against swinery, resulting in a good amount of fresh non-veg food if the beast lost its life in the shootout. Of course, hunting now being prohibited and only practised by poachers, most people nowadays eat domesticated pigs. It is estimated that the approximately one lakh pork eaters in Kodagu purchase upwards of three tones of pork each day, which works out to 11kg per head per year. In fact, the district faces a pork shortage and must occasionally import meat from as far away as Andhra Pradesh. Sales peak during wedding season, from about the start of the year until May, since a fancy wedding party requires at least 100 kg of pork.

The best way to sample pandi is, of course, to make friends with Kodavas and dine at their homes. The spicy preparation goes especially well with whisky, which some local gentlemen enjoy very much. It is also festive food served at the two major autumn festivals—the ancestor-worshipping at kailpodu (September) and the puthari (or huttari) harvesting feast (November-December). One can also get pork at the many homestays that dot the jungles, though the quality is not always guaranteed (unless the kitchen is run by a Kodava lady).

However, with the increase in tourism there are superb pork preparations on offer in Madikeri, the district’s capital, ranging from the aforementioned cosmopolitan fare at Abeo’s Kitchen to traditional Kodava pork lunches in canteens and a range of creative pork bar snacks.

Among the slew of joints that are geared towards promoting regional delicacies, Coorg Cuisine (opp. Head Post Office, Main Road) is one of the first and has a comprehensive pork selection, and an instructive menu. Of seven pork items on offer, the thrice-cooked pandi beev barthadh (₹160)—chops first boiled for tenderness, then deep-fried for chewiness and finally tossed in a spicy mix of pepper, kachampuli and jaggery—is easily the best. There are also pork curries, pork fries and a seasonal tender bamboo shoot pork curry. A special accompaniment is nool puttu, rice noodle hoppers similar to the idiappam of Kerala, and the rate for pork mains is quite humane at ₹150-170.

However, a visitor’s best bet for a truly authentic Kodava meal is the family-run Folksy Food (1st floor, R.T. Complex, Temple Road, Chickpet; Sunday holiday), which is extremely popular among locals for the pork cooked to perfection with home-harvested kachampuli. There are only four tables and no printed menu, so just find a seat and ask what’s cooking. The superb rice meal comes with two local seasonal veg items and a delicate rasam, plus a choice of amazing add-ons like pork, chicken, mutton or fish, all cooked by the owner’s wife. Half portions can be ordered if one wishes to sample everything and a big lunch for two comes to about ₹300 which makes it the best meal deal in town.

A visually charming restaurant is Tiger-Tiger (next to Hotel Rajdarshan, M.G. Road) located conveniently near the tourist hotspot Raja’s Seat. One is seated on the veranda of an old bungalow and the very homey, authentic ₹220 meal combo of sublime pandi curry with kadambuttu and akki otti can be fortified with extra pork fry, pandi barthadh (₹150). Other eateries worth trying include Taste of Coorg (23-39, C.M.C. Building, Main Road), in a shopping complex near Town Hall. Their ‘black beauty combo’ with slow-braised bony chunks of pandi and accompaniments such as rice balls or rice roti for ₹150 is good for starters but since the portions are tiny one may want to order some dry pork (₹120) or soy-flavoured chilli pork (₹150) alongside. For the slightly health conscious there’s a grilled oink-oink sandwich (₹100). The newest tourist shack in town is Coorg Foodlands (Nethravathi Complex, opp. Private Bus Stand) with only three and a half tables, making it the tiniest in town. Their pork meal with rice and sambar is priced at ₹150, but they also do boneless chilli pork, pork pepper fry and pork onion fry, which can be eaten with akki otti, kadambuttu or nool puttu.

However, to fully appreciate pork it is imperative to seek out the seedy bars of town. These may appear somewhat unwholesome at first glance, but on the other hand pork being party food it is best had with enjoyable beverages at almost cost price. The thing to remember is that in these establishments pork is usually pronounced ‘fork’ with a bit of a drunken slur.

The better among drinking dens include Capitol Bar (opp. Private Bus Stand, Main Road), established around 1960 when it was possible to hang out there and spend 25 paisa. Today you’re likely to part with Rs 200-250 for a big drink and organic ‘fork’, which is cooked differently each day of the week. So it makes sense to devote a week to this particular bar. On Fridays, for example, it is packed with farmers tanking up on account of the weekly market and if the ground floor drinking hall appears unsavoury, head for the snazzier souterrain dining room (if open).

More bar snacks can be had at New Churchside (opp. St Michael’s Church, General Thimmaiah Circle, Tollgate), which is a decent all-day dining option where even women may feel comfortable—their terrace is particularly nice on a sunny afternoon. They offer ten exciting ‘fork’ varieties, including garlic pork, dragon pork, Chinese pork and pork chilli, plus some extras like fresh bamboo shoot pork in the monsoon season. A blackboard lists specials, with rates ranging from ₹150 to ₹190, but one can also sample all dishes in half portions (₹95-105). My personal favourite is the curiously named ‘raw fork’, basically plain deep-fried pork morsels dowsed in chilli vinegar, which goes flawlessly well with a chilled lager. For those who like their bacon spicy, the Pork 99 is a great choice.

Other pork bars include Surabhi (opp. Capitol Bar, Main Road) which commands a good street view from the top floor drinking hall (on the first floor they have a tidy family room for non-drinkers). Their spicy-greasy pork is best had with a plate of dosas and cheap rum. Kodagu Retails (in the basement of the same building as the previously mentioned Folksy Food) is essentially a booze shop that has a canteen which is one of the best-kept secrets on Madikeri’s food scene: for a mere ₹200 one gets pork masala with ragimudde (a wholesome millet dumpling) and a glass of red wine, which ranks as the perfect bar lunch since ragi is supposedly good for overall health and red wine fights cholesterol, offsetting any negative side-effect that the pork might produce.

The one thing that can be said about all the messes listed above is that they know their pork. They may be humble, but display that self-assuredness which is a hallmark of small towns where the fare is local, natural, hygienic and consistently tasty. This is, in my view, in stark contrast to big city restaurants where the staff often are utterly disconnected from the multi-cuisine grub they dish up.

I recall one particularly strange bar meal in Bengaluru where I ordered a Goan pork vindaloo and got a potato curry. Upon asking for a clarification, the waiter claimed that I had ordered ‘aloo with wind’. A lot of hot air in the urban culinary business… But for those who fancy themselves true connoisseurs, a week in the hill station of Madikeri, traipsing from one pork canteen to the next pork bar, gives an unadulterated taste of piggy heaven. 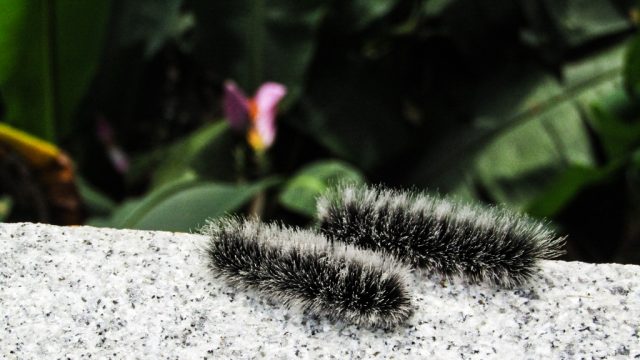 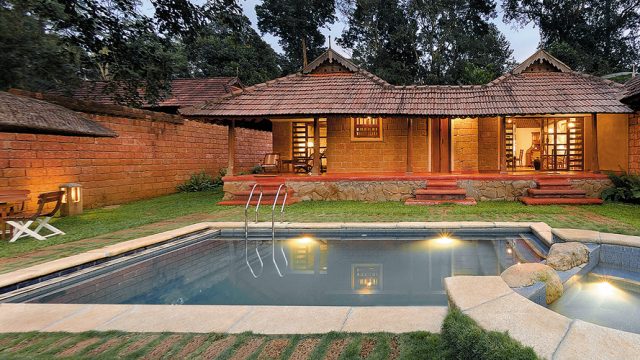