As we waited impatiently on a cold October morning, the Boulevard de Poissonnerie was still bathed in

predawn darkness. The street lights and restaurant signs blazed bright. The show window of a naughty lingerie shop displayed dainty nothings on two coy mannequins, promising more engaging wares inside. There was a keen alertness in the pearly darkness. Paris, as we all know, never sleeps.

We were going on a day-long Champagne tour and it was 15 minutes past our scheduled pick-up time. We had changed our hotel the previous afternoon and hoped our guide knew the updated address. Just as I went inside to ask our helpful concierge to call the tour office, a black Mercedes 10-seater pulled up.

We were the first to board and, in one of those rare, smart moves, we took up the front seats. Me, next to Daniel, our guide, and BD, next to the window with his camera. After collecting the rest of the party, we were on our way. Daniel wove in and out of the early morning rush-hour traffic with the ease and deftness of a seasoned Parisian. “I came to Paris 15 years ago from the US to study and never went back,” he told us. Daniel started speaking once we hit a quieter road bordered with hedges on both sides. Our side of the road was relatively free. The other side was not moving at all, with row upon row of vehicles waiting to get into Paris.

“Notice the mist?” Daniel asked. Of course we did. It lay in a white opaque blanket, rendering the morning hazy, so much so that our van headlights picked through it with difficultly. “This is the reason good grapes don’t grow in Champagne,” he concluded, astounding a van full of wine enthusiasts.

Daniel was a good raconteur. We were passing into open country now and, with the sun clearing the mist, the Marne valley enveloped us in all its grandeur. In the distance were gently sloping hills with violet green shades. These were the vineyards. Daniel continued with his discourse. “See the slopes? The northern slopes get less sunshine, so are good for chardonnay, the white grapes, and pinot meunière, the red grapes. The grapes on the southern slopes, pinot noir—dark purple or black grapes—are soaked in sun to a greater extent, so have more character and are good for darker, richer wines.”

But, north or south, the grapes of Champagne are pale, having a niggardly share of sunshine plus low average temperature (around 10 degrees), which make it difficult for the grapes to attain ripe wholesomeness. After tinkering with pale wines which were a poor apology in the face of the full-bodied Bordeaux reds, one Dom Pierre Pérignon, a Benedictine monk, made a number of discoveries in the 17th century. Trust the French to turn a potential weakness into a unique strength. Hence, the pale acidic wines, subjected to a second natural fermentation in bottles, evolved into champagne, a drink synonymous with hedonism.

Suitably enlightened with all that knowledge, we reached Reims. “Best way to pronounce this is Kranz,” opined Daniel. We were soon in front of the House of Pommery, which stood bang in the middle of the city.

A statue in Reims
Getty Images

Inside was the tasting hall, with a taxidermied African elephant on its trunk. Groups of cherubs and ethereal fairies holding up tunnel-sized oaken casks and bunches of oaken grapes looked on .We passed down the 116 steps, and found ourselves in cellars big enough to house entire subway stations. Daniel had already told us how, beneath the manicured lawns and placid vineyards, the entire Champagne region is crisscrossed with champagne caves. Originally chalk and limestone quarries, later converted to war bunkers, the empty limestone pits now provide the perfect cool-dry atmosphere required for the vital slow second fermentation. Slightly dizzy from all the traipsing around in dark cellars, we climbed back into the tastefully decorated hall. An impeccably dressed man behind a long table set with champagne flutes and lovely bottles chilled just right poured us the Brut Royale.

Peter Mayle describes the scenery of Champagne as undramatic, like no other scenery in the world. And so it was. Here, order and method were so pleasing to the eye, that further drama would be superfluous. Miles upon miles of evenly tended vines, 76,000 acres to be precise, stretched to the horizon. I was enchanted by my first glimpse of Verzy. It dozed in the pale October sun, the brown and white buildings pristine, framed by clipped trees and vines. Verzy was the last village to get elevated to the Grand Cru club in 1985. Grand Cru literally translates as “great growth” and only 17 of Champagne’s 319 villages enjoy this status.

Before we entered Verzy, we stopped by some vines. Vendange or plucking season was over. Cupping a few grapes left behind after the plucking, Daniel broke off a few and gave them to us to taste, press-style: take the juice out without breaking the skin. This is the cuvée—the first juice—and the only juice from which champagne can be made. Some brilliant orange and pink roses growing by the vineyard caught my attention. “These are not here only to enhance beauty, they stand guard against any disease which may trouble the vines. Being very delicate, the flowers are attacked first and alert the farmer before any vermin can get to the grapes,” Daniel explained.

We stopped at a lovely villa, whitewashed, with pink impatiens drooping decorously from the eaves. This was La Maison Penet, a 400-year-old, medium-sized producer, specialising in low dosage or brut champagnes. We entered a rectangular tasting room. A table was set with a crisp white cloth and rows of champagne flutes and goblets of varying proportions alongside the luncheon crockery.

On our left was a old-style wooden pressoir. Adrian, the amiable and rosy-cheeked manager, initiated us into its mysteries. The press comes down on the grapes very slowly, so that the cuvée is squeezed out with minimum damage to the grapes. Nowadays, it has been replaced by steel presses. The secondary juice, lavasse, makes the stronger Marc de Champagne, while the last part—skin, etc.—makes Ratafia, a fortified spirit. To complete our champagne education, Adrian explained to us how the second fermentation, which had to take place in the bottle, is assisted by human intervention. Every day, a man comes to the cellars and turns each bottle one eighth of a turn (riddling), gradually tilting the bottle so that the remnants of the second fermentation slide into the bottle neck. Even today, most of the major Champagne houses use skilled riddlers as there is no exact equivalent of the human hand.

A glass of bubbly
Getty Images

Never again would I be able to look at a champagne bottle glistening with beads of moisture without thinking of the hard work that goes into the perfect Moët et Chandon or Taittinger year after year, vagaries of nature notwithstanding.

One of the sights I will never forget is the road leading out of Verzy. It lay in a smooth grey ribbon, unfurling between lush greenery and vines on one side and tall trees on the other, rising and dipping till it disappeared into some woods at the horizon.

“We are reaching our last stop, before we head back to Paris,” Daniel called out. We were entering a small village, with narrow streets hemmed in by fairytale houses. “This is a very exclusive house, the Champagne Salmon. It produces only 10,000 bottles per annum.”

We stopped next to Salmon’s signage, a hot-air balloon nestled in a wicker basket. This we learnt later was a favourite family pastime. Salmon is still run by the founding family, and we were greeted by Monsieur Salmon, Sr, himself. With handsome features, twinkling cornflower-blue eyes, Alexandre Salmon was a well-preserved octogenarian. “We are three generations into champagne making. I started off as a grape picker and now have vines of my own.” After a brief trip into the cellars, we were back in the sunlit tasting room, where the champagne was being poured out. The broad French windows commanded an excellent view of the vineyards, framed by a sturdy tree.

“C’est quelle arbre?” I asked Monsieur Salmon in order to impress him with my rudimentary knowledge of his native tongue. And impressed he was. He launched into a fluid description, of which I could only understand cherise , i.e., cherry tree. “Ill est malade,” he added. To my inexperienced eyes it looked vibrant.

The gentleman was now warming up to me, pleased with my bad French, and shared that he had been blessed with a great-grandson on his 88th birthday. I wondered what it would be like to be 88, with a loving family, more than enough to live by and the zeal to work every morning. Living here, as Monsieur Salmon did, looking at the skies, cupping the grape bunches, tasting the tart young wines and, later, the champagnes, I could imagine a very enjoyable and fulfilling life. One worth living for a long, long time . 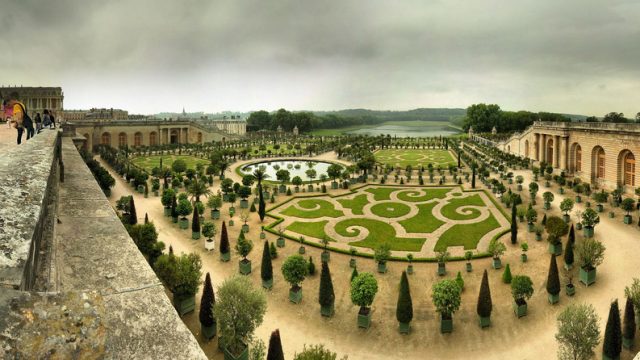 Explore this gorgeous country with our Quick Guide