a fuller picture behind the tourist attraction of Badami. Before Badami became the capital of the Western Chalukyas, Aihole and Pattadakal each briefly enjoyed that position, resulting in a flurry of temple building in each of these areas, with Aihole today considered one of the earliest and best examples of rock-cut architecture in the subcontinent.

Although small and lacking in all but the most basic tourist facilities, these 7th-century CE sites pack in an incredible wealth of heritage and history.

Pattadakkal, 29 km to the north-west of Badami, was the second capital and the coronation town of the early Chalukyas. The complex with 10 temples dates from 7th to 9th centuries CE. The Rashtrakuta Jain Temple outside the complex, currently under restoration, is built on the banks of the Malaprabha (Tungabhadra) river. The 8th-century Kaddi Siddesvara Temple and the Galaganatha shrine are the first temples you’ll come across. Adjacent stand the walled remnants of the coronation hall. The tiny Jambulinga Temple is supposed to have inspired the tapered shikharas of Orissa’s temples. Adding to its beauty is the makara torana, with a brilliantly executed Nataraja. The Dravidian style Sangameshwara Temple, on the right, was built by Vijayaditya (6-7th centuries CE).

Carving at the Durga Complex

The 8th-century Virupakasha and Mallikarjuna are two notable temples in Pattadakkal, apart from Papanatha, dedicated to Surya. The Virupaksha Temple was built by Lokamahadevi, the chief queen of Vikramaditya II. An impressive and nearly intact Nandi sits majestically on the front porch. The beautiful pillared hall has panels depicting scenes from Hindu myths and epics. Virupaksha incorporates all aspects of temple building with beautiful pillars, rows of ganas on the plinth, and jewelled pearl etchings for trims.

Trilokamahadevi, another queen of Vikramaditya II, built the Trilokeshwara Temple, now known as the Mallikarjuna Temple. The panels here also show stories from the Mahabharata and the Ramayana. Outside the complex is the Papanath Temple, the oldest of the lot, dating to 8th century CE. It has mythological scenes carved on its ceilings and walls. Its doorways are very ornate.

TIP Pattadakkal does not have any hotels or eateries. For food, do try the local jowari roti, sprouts cooked in spices and sweet yoghurt in earthen pots sold around the complex

Originally named Aryapura, Aihole, also to the northwest of Badami (46 km), was a university town that patronised art, culture and education. It once boasted of 500 teachers and many arts. Hailed as the birthplace of structural temple architecture in Karnataka, its ruins and temples (built between the 6th and 12th centuries CE) dot the drive into the town. The route via Pattadakkal is shorter by 12 km.

The late 6th century CE Ravanaphadi Cave has a Nandi in front. Dedicated to Shiva, the cave has a pillared porch, apart from a sanctum. There are life-size sculptures of Ardhanariswara and Harihara at the entrance. Inside, look for the Saptamatrikas (fertility goddesses). Nearby is the Huchchimalli Temple, where restoration work is under way.

The Durga Complex houses a series of temples. The shrine to Durga is eye-catching for its unique structure and sheer magnificence. Laid out in an apsidal plan, it is one of the first three-celled temples (trikuta) in Karnataka, with a common pillared hall. Behind the Durga Temple stands the 7th-century Lad Khan Temple, which folk lore says, owes its name to a Muslim noble who lived in the temple during the British rule. Two other flat-roofed temples, Gaudhar Gudi and Chikki Gudi (both dedicated to Shiva), within the complex belong to the same age. A pillar to the right of the entrance flaunts the Chalukya royal emblem arranged in a semi-circle – boar, flag, conch and the wheel of life. A large stone Nandi dominates the central hall.

Southeast of Lad Khan is the Bhagvati Temple, whose uniqueness lies in its circumambulatory path, missing from the earlier Chalukya temples. Do stop to admire its ornate doorways.

A Nandi sits across the east-facing Mallikarjuna, Galagnatha and Surya temples. Beside the Durga complex is the Jyotirlinga complex comprising 11 temples.

The Archaeological Museum of Aihole, behind the Durga Temple, houses several Chalukya sculptures.

The most interesting structure in Aihole is the 6th century CE Buddhist ruin of a chaitya cut in the face of the Megutti Hill. One of the oldest temples, it still remains half-excavated.

The wealth of heritage at Aihole has put it on the list of potential UNESCO World Heritage sites.

There are no accommodation options or eateries in these places. It is best to make Badami your base to visit these sites.

There are limited eating options in Aihole. Most of the restaurants offer only south-Indian vegetarian cuisine. In Badami, Hotel Pulkeshi Restaurant at Badami Court is open 24 hours. Heritage Resort has a vegetarian restaurant and Krishna Heritage serves good multicuisine fare. You can savour both north-Indian and south- Indian food at Hotel Anand Deluxe. The dhaba food is pretty good here – fried avalakki (soaked and dried rice with fried groundnuts) works well with hot tea.

When to go Between September and February. Summer in this region is hot Location Set in the southern Deccan Trap Air Nearest airport: Hubli Rail Nearest rail: Badami, Bagalkot 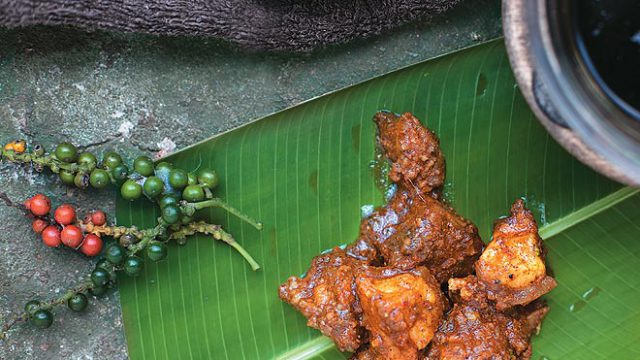 The Best of Karnataka

Immerse in the natural wonders of Coorg or explore the historic city of Mysore, Karnataka has something special for every traveller