In each one of us, there exists a line, an imaginary one between who we

are and who we want to be. The earth has one too. It is 24,902 miles long and crosses three oceans and nearly a dozen countries. It cuts through rain forests, savannahs, volcanoes and seas. The line has a name: equator. But the thing about the equator is that it’s imaginary.

In fact, you can say very much the same about Malabar.

Except that unlike the equator, there was once a Malabar. A British principality of India that extended from north to south along the coast covering a distance of about one hundred and fifty miles, and lying between N. Lat 10º 15’ and 12º 18’ and E. Long 75º 14 and 76º 56’.

Its boundary on the north was the South Canara District and in the east, Coorg, Mysore and Coimbatore; in the south, it was bounded by the native state of Cochin and on the west flanked by the Arabian Sea. This then was Malabar. Also called by Arab navigators and other seafaring population who flocked to its shores for pepper and other spices as Malibar, Manibar, Mulibar, Munibar, Malabria.

After Independence, Malabar as a district was no longer recognised and the region was divided to form the northern part of what is today called Kerala. And yet, Malabar, which has no geographical boundaries, no presence on a map of India, still exists. As a province of the imagination. And as a state of the mind: laid-back, slow, governed by an attitude of live and to let live. Insular, detached and removed from all that is happening elsewhere.

Malabar: The Past and the Present

The Arabs came; they were welcomed and allowed to put down roots. The Portuguese arrived and they were allowed to open doors for the western conquistadors. Next came the French and the English who began to trawl for Colonial greed. Quietly, except for a stray uprising or two, the Zamorin ceased to be king in all except name. Malabar, despite being the home of the Kalaripayattu and the ‘chakevers’ or the trained warrior lords who were hired to settle disputes by combating with each other, meekly went under Colonial rule.

In more recent times, when all over India you see a conspicuous effort to refashion the country in the image of western capitalism, Malabar talks about communism unabashedly. Everywhere you see its signs: flourishing trade unions, red buntings that criss-cross streets, wall posters of Marx and Lenin, and even rock faces that wear the symbol of the hammer and sickle.

It is perhaps this inviolability that causes an echo of a time gone past to resonate within Malabar. Of clock hands that don’t seem to move. Of a life that might have changed in appearance but whose soul remains untouched.

Land reforms and remittances from the gulf region have narrowed down the divide between the rich and poor. Instead what you have is a great middle class spread among plain concrete boxes, garishly embellished mansions and the traditional tile, wood and laterite nalukettu tharavads.

Yet within are a people whose lives might have been that of their ancestors. The changes are all superficial. Kitchen gadgets might have replaced traditional methods of cooking but the cuisine remains the same. This is the region where you can taste the finest repertoire of vegetarian dishes cooked in Kerala and the unique Moplah culinary style that harmonises Arab and indigenous flavours.

If Ayurveda was once the prevailing system of medicine, it has now metamorphosed as a means to improve complexions, hair growth and children’s memories. Football still reigns as the sport that drives fans into a frenzy. Television serials might have replaced Kathakali and Chakyar Koothu but it is still the happily-ever-after theme that is played again and again.

As one travels from one end of Malabar the-once-province and now realm of imagination, it embeds itself into your soul with an insidious charm. The land spooned by the sea undulates; the coast speckled with coconut palms rises almost abruptly into elevated terrain. Little hills with trees abound. Cashew and jack, mango and teak and a wealth of forest trees can be seen.

Pause to stare at the river that feeds the southern part of Malabar. Like Malabar this is a river that is laid-back, slow, and meanders along, dividing itself into many tributaries. A group of children frolic in a shallow pool in the river bed. A mahout washes his elephant in knee deep water. A woman washes clothes while a transistor perched on a rock speaks to her with authority on varied subjects: Optimum temperature of milk to set curd is 70º C; 10 per cent of men marry women older than them, etc.

Alongside on the road a jeep trudges past announcing a meeting of the communist party in the next village. Behind the jeep, young men in red shirts and khaki trousers and red caps follow. They shout slogans as they march militantly. The red volunteers.

In the paddy fields, a motorised tiller rakes the soil. A farm worker with only a towel draped around his middle, a beedi behind his ear and his body glistening with sweat from his labours stands ankle deep in slush watching. When the procession moves away, he turns back to what he was doing. For, in Malabar, it is perfectly acceptable to live by the dictum: why should you remove your shoes when water flows far away elsewhere? 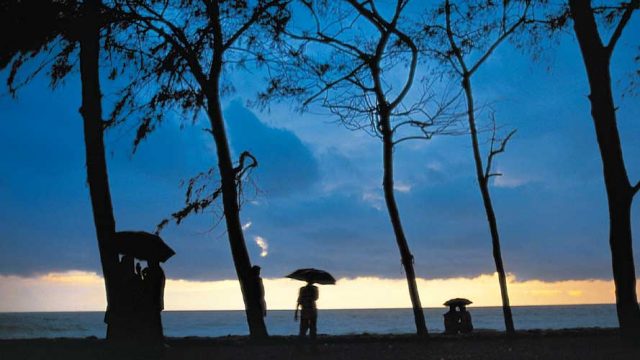 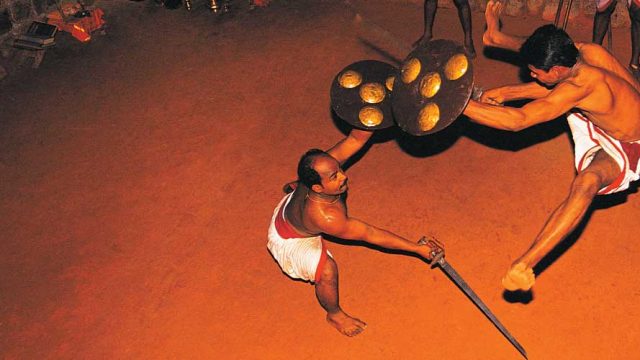 An important centre of Kalaripayattu, Thalassery is also rich in architectural heritage 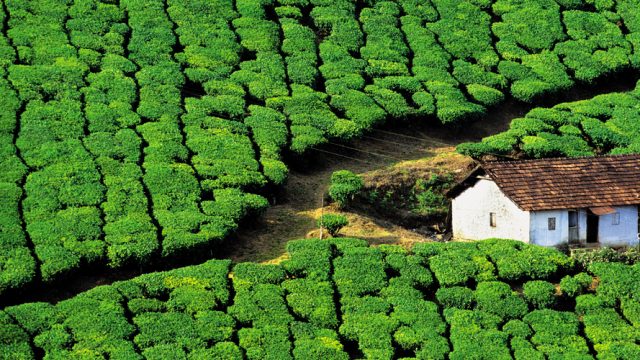