Harike is home to one of north India’s foremost wetlands, a vast shallow lake created

by the confluence of the Sutlej and Beas rivers. The 285.1 sq-km Harike wetland ecosystem stretches across the districts of Amritsar, Ferozepur, Kapurthala and Jalandhar in the state of Punjab. Approximately 198.6 sq km of the wetland is used for agriculture and much of the area is covered by grasses such as munj, kahi, bater, khabbal, dab and khas. Stands of shisham and acacia, along with other varieties of trees, line the embankments. Dense floating beds of water hyacinths cover about 70 per cent of the lake, wreaking havoc on its ecosystem.

Keeping in view the numerous species and large congregation of water birds, both migratory and domiciled, attracted to the wetlands, a considerable part of the area was declared a bird sanctuary in 1982 by the Punjab government authorities. In 1990, Harike Lake was declared a Ramsar Site. With its splendid natural setting, the area provides extremely favourable conditions for nesting and roosting.

This area has also an interesting past. It was at Harike that the Khalsa army invaded British territory in December of 1845, breaking a treaty signed by the East India Company and the late Maharaja Ranjit Singh; sparking off the First Sikh War, which the British won with great difficulty.

Today, with over 368 recorded species, the rich and varied birdlife at Harike has increased further after the massive effort by the army along with the Punjab Wildlife and Forests Department to rid the wetlands of the deadly water hyacinth weed.

The Harike Wetlands also supports other rare and endangered species, some of which are listed in the International Union for Conservation of Nature (IUCN) Redlist of Threatened Animals. It is also home to the smooth Indian otter, jackal, Indian wild boar, mongoose and jungle cat and several important medicinal and decorative plants and trees. In fact, the fruit of the kigelia pinnata is used to treat rheumatism, and the wood of the dilbergio sisso is utilised for making furniture as well as charcoal.

These wetlands are a shallow artificial water storage reservoir with 13 islands, near Harike Town. The sanctuary area now consists of shallow marshy stretches – an ideal habitat for water birds.

For tourists there is only one main entry point into Harike Wetlands. This is from the Nanaksar Gurdwara across the barrage at the southern end on the Ferozepur side of Harike. At the Harike Police Station, turn off from the Amritsar-Ferozepur Road, and then head left for the Harike Wildlife Office (opposite the canal Rest House) and the barrage, the former issuing permits for entry.

Though boating is not possible at Harike without special permission, there are plenty of trails offering rich sightings of birdlife.

Birds can be sighted from various points of the sanctuary but the finest trails are along the Left Bund passage. In terms of numbers, coots are the largest migrants, followed by the common pochard, red-crested pochard and the tufted duck. Among non-diver birds, the wigeon is the most abundant, followed by the gadwal and shoveller. The vulnerable species found at Harike Lake include the ferruginous duck, Pallas’ fishing eagle, greater spotted eagle, imperial eagle, black-bellied tern, pale-backed pigeon and Syke’s nightjar.

Other birding spots include the area behind the Nanaksar Gurdwara, the acacia as well as shisham woodlands, the marshlands, weedy embankments and sandbars along the canals, especially downstream. Amid the forested tracts north of the Sutlej and west of the main road, you’ll discover species like the penduline tit and slaty-blue fly catcher. Along the banks of the Sutlej, about 5 km away from the barrage, look for Syke’s nightjar near the tamarisk bushes.

TIP Jeeps are allowed only along motorable roads. There are no Forest Department jeeps for tourist activities. Hire one from Amritsar

The Canal Guest House opposite the Harike Wetlands Complex is perhaps your best bet here. There are no advance bookings. The attendant stationed there will guide you once you reach.

Another good option to stay is the Satluj Palace (Cell: 09417393163; Tariff: ₹1,500) on Amritsar Road. They have comfortable rooms. Their on-site restaurant serves good vegetarian fare.

When to go October to March Location At the barrage at the confluence of the Beas and Sutlej at Harike town Air Nearest airport: Amritsar Rail Nearest rail: Amritsar 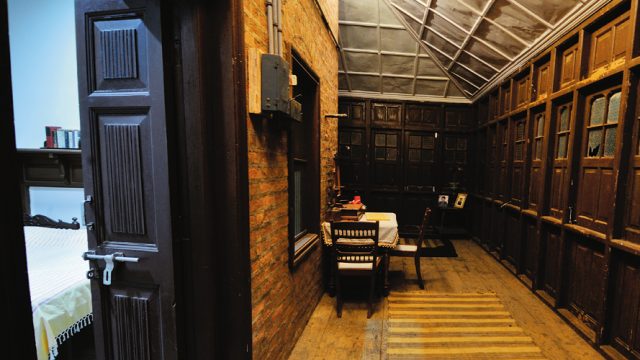