and the luxury of letting time slip by without the necessity of making every moment outstandingly memorable.


Alumkadavu offers the ease of being left alone in a quiet celebration personal space and relaxation, without the pressure of more disciplined therapeutic remedies. Kerala’s sleepiest paradise, embodies the peace and tranquility that ubiquitous pictures of boats in the backwaters can only try to communicate. As though joining in the celebration of life in its natural flow, this region is occupied by a number of simple, peaceful little shrines, representing the quieter aspects of God’s own country. The Alumkadavu-Sasthamkotta Lake region in North Kollam particularly urges travellers to take a break from hectic itineraries, and smell the earthy, redolent flavours of incense and coir, of wood on water and gently spiced fish.

It is advisable to travel through Alumkadavu by car, as it offers ease in commuting to the backwater village, about a distance of 5km from Karunagapally town on NH47. It is also possible to stay and explore Sasthamkotta, about 17km away, home to one of the two largest freshwater lakes in Kerala.

The Alumkadavu-Sasthamkotta region represents a way of life rarely seen elsewhere. One of the best ways to experience the tranquil offerings of this region is by vallom, or a small boat, which allows visitors to row past small homes on the banks of the backwaters, past serene churches, and quiet homes, perhaps occasionally surprising a pair of sheepish lovers.

The water, peaceful, offers a sense of almost languid contentment. Time spent on these boats can be an elemental and exotic experience for first-time visitors. But for the people who live here, the boats are simply a means of transport to schools, the marketplace and their workplace. Valloms seats up to four people, and the rest of the passengers have to stand.

Choosing to embark on one of these boats as a commuter offers the unique prospect of discovering native Kerala and her people, not the somewhat more decked out Kerala represented in attractive brochures and prime tourist locations.

Kollam and Alleppey are famous for coir products. One of the more accessible coir-making centres can be found close to the Green Channel Backwater Resort in Alumkadavu. Here, it is possible to witness around 10 workers silently at raattus – spinning wheels, not unlike charkhas – coaxing coir into ropes by hand.

The Dharmsastha Temple is one of the major temples dedicated to Lord Ayyappa. The temple’s roof of corrugated sheets was made in deference to the hordes of monkeys that are its respected guests, who took to playing with the tiles that had been installed originally, used in most traditional temples across Kerala. Another unusual custom here requires devotees to step on what seems to be monkey droppings along the path, as monkeys are said to be dear to the child-god whose idol is housed here. Fortunately, the path is only paved with sand and gravel. The temple is located in the town of Sasthamkotta, right next to the Sasthamkotta Freshwater Lake, the largest freshwater body in Kerala, which provides drinking water to the entire district. Steps lead down from the temple to the lake, though there is no space to sit comfortably for long hours to take in the beautiful expanse of the water surrounded by the hills.

The Sri Kashi Vishwanathar Temple, also known as the Deccan Kashi Temple, celebrates the legend of a priest who went to Kashi to find a Shivalinga in the Ganga while taking a dip. The linga was brought back and installed at this temple. Another tale about this site is that it originally housed a temple dedicated to Lord Vishnu, built around 2,000 years ago and washed away by the sea before being rebuilt 150 years later. In an intriguing blend of legends and traditions, the temple as it stands today is dedicated to both Lord Shiva and Lord Vishnu. As a result, Mahashivarathri is celebrated annually for 10 days, as grand as the festivities of the Shri Krishna Jayanti festival.

Located right opposite the Sri Kashi Vishwanath Temple, the Vadakkenadayil Bhagavathy Temple faces the west. The original structure, believed to be 1,800-yearsold, was washed away by the sea. The temple that has come up in its place is only around 13 years old. Legend has it that pilgrims brought idols of Kannagi Devi from the now submerged Chola city of Kaveri Poompattinam off the coast of Tamil Nadu. Her idol is worshipped here. The 10-day Thottampaattu Festival is celebrated here every year in the second week of May. The festivities include an enactment of Kannagi’s story, as rendered in the ancient Tamil epic Silappattikaram. Another festival that celebrates the legend of Kannagi is the famous Bharani Festival of the Bhagavathy Temple in Kodungalloor.

Azheekal, a few kilometres away from the Vadakkenadayil Bhagavathy Temple, offers a great view of the coast from a long walkway that stretches into the sea. Huge rocks line both sides of the walkway, and the view at the end is spectacular.

The Hugging Saint at Amritapuri

Amritapuri is located about 14km from Alumkadavu by road, and is also accessible by boat. With the TS Canal lake on one side and the Arabian sea on the other, this spot offers an idyllic and picturesque setting for the ashram of spiritual leader Mata Amritanandamayi, also known as Amma, famous around the world for her selfless love and compassion for all beings. Her name itself translates as ‘Mother of Absolute Bliss’. Amma’s teachings are not based on any particular religion and she attracts people from all faiths and corners of the world. Devotees wait in line for hours for a meeting, or darshan, which includes the therapeutic hug, described by Amma as her karma to console those who are sad. As a result, she is known as the ‘hugging saint’.

Mata Amritanandamayi’s Ashram is situated near her birthplace in the fishing village of Parayakadavu, which can be accessed via the Beach Road from Karunagapally across the backwaters, or via boat from Vallickavu. The ashram is a city in itself, with a hospital, a number of buildings for accommodation for devotees and staff, a temple where devotees can meet Amma, and a café that serves food like banana cashew bread, oatmeal cornflake bars and pizza. Anyone may visit and stay at the ashram with 10 days notice. Visitors can participate in ashram activities, such as yoga and meditation. Mass poojas are also conducted. For a darshan of Amma, however, it is advisable to call ahead and make sure she is not on tour.

Situated at a distance of around 14km from Alumkadavu, this temple is over 1,000 years old. A legend sur-rounding this temple speaks of how the Portuguese tried to rob the temple. However, they were not able to lay their hands on much, and when they tried to leave, their ships would not move. Finally, they returned and apologised for their deeds by inscribing their repentance upon a black stone, writing that is still visible today on an in-scription just in front of the temple doors, before the main shrine. The temple is shrouded in other tales as well; locals believe, for instance, that a yakshi (female spirit) lives in the palm tree growing outside the structure.

TIP Men must be bare-chested and wearing mundus, women must be dressed in saris or salwar kameez

A variety of religious items for sale, Ochira Temple

Ochira (W ochira.com), 17km from Alumkadavu en route to Kayamkulam, is not a temple in the conventional sense so much as it is a kind of spiritual hub. There is no single predominant deity or idol, but a number of smaller idols located around huge trees in a vast open space. A part of this space honours the Goddess and the feminine divine principle, in Shakti, while other spaces commemorate the parabrahmam, the omnipresent. On one side is the Ayyappaswamy Kshetram, a temple that honours Lord Ayyappa, constructed along the lines of the Sabarimala Temple, and on the other is a mosque. Ochira is also a Shiva Kshetra, represented through the presence of the Ochira Kaala, colourfully decorated bulls that symbolise Nandi, Shiva’s vahana or mount. During the Ochira Kali Festival in June, men dress up as warriors and enact war scenes in the water. Even the Buddha is believed to have camped here at one point. People of many religious denominations visit this temple, which is in many ways a true embodiment of Kerala’s multicultural heritage.

Façade of the Malanada Duryodhana Temple

The local cuisine spoils visitors for choice: crabs, fried lake fish such as karimeen, prawns and shellfish (chippi), boiled tapioca typically eaten with spicy fish and beef curry are some of the local specialities. Most resorts and hotels have fairly decent restaurants and cafes. The best of these is the Green Channel Backwater Resort, which has huge spreads of local delicacies every afternoon. Puthiyakkavu, 4km from Karunagapally, is home to Mother’s, a modest restaurant with very wellprepared offerings.

This temple is dedicated to the infamous oldest Kaurava brother from the Mahabharata, whose animosity towards the Pandava brothers was a prime mover in the epic. Legend has it that Duryodhana, while in pursuit of the Pandavas, grew tired and was given food and shelter by people belonging to the lowest caste, the kuravas, at this location. The priest at the Malanada Duryodhana Temple, thus, hails from that community even today. No idol has been installed here, and the temple witnessed animal sacrifices in the past. While that practice has discontinued, remnants of spiritual animism and folk tradition remain a big part of the customs; often, a rooster is used symbolically during worship.

This Syrian Orthodox church, located in Kallada, is said to be several centuries old. While it has been reconstructed four times, the woodwork from older versions of the church is still visible within the structure. A beam of wood, said to be around 700 years old, is carved with symbols from three faiths: a Muslim crescent, a Hindu symbol and a cross that represents Christianity. There are no pews and people worship while kneeling or sitting on the floor. The shrine is dedicated to Mar Andrews, who came to Kerala from Jerusalem in 1678 and was consecrated and entombed here in the year 1692.

The origins of building houseboats or kettuvallams can be traced to Alumkadavu, which was the first place in Kerala where such work was undertaken. Kettuvallams are houseboats built in a traditional style that has survived the test of time and tide, to remain popular to this day. The kettuvallam is built using indigenous materials keeping in mind the local needs. ‘Kettu’ means ‘to build’, and vallam’ means ‘small boat’ – the name kettuvallam’ thus points towards the act of building, which is as inherent to the meaning as the finished product. Alumkadavu witnesses kettuvallams being constructed, quite close to the Green Channel Backwater Resort, on all days of the week except Sunday, from 8:00am to 5:00pm.

Even watching the process take shape requires a strong stomach, as fish oil is used as coating to protect the surface of the unfinished wood-and-coir boats. The smell, overpowering while it lasts, quickly dissipates in the next stage of building a kettuvallam. Finally, once the bottom of the boat has been shaped and the thatching of its roof has commenced, its bare floor is chalked up. It takes about three months to build one of these houseboats – a true labour of love. 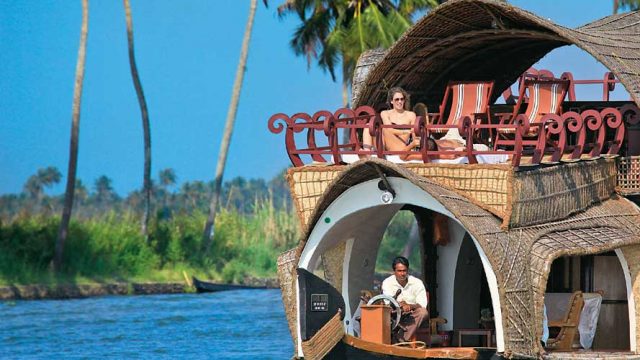 Discover the tranquil backwaters and gentle boat rides of Alumkadavu