To some, the dusty townships of Haryana might seem the least likely repositories of hidden architectural delights.

For, the Jat heartland evokes, if anything, images of pre-natal sex determination clinics, coaching centres and, in recent years, Mallika Sherawat! Yet this land of scrub vegetation and hardy country folk is studded with jewels of the most remarkable beauty, in towns such as Farrukhnagar, Jhajjhar, Narnaul, Pataudi, Panipat, to name just a few. Each is home to some of the most unvisited yet spectacular monuments, within comfortable driving distance from Delhi and accessible by good motorable roads making them ideal destinations for day-trippers on a history trail. But, first, Narnaul.

Most of the surviving monuments in Narnaul are from the medieval period. Given its strategic location between Delhi and the princely states of Rajputana, Narnaul has always been a prized possession for ambitious chieftains — be they Afghan, Turk, Mughal or Rajput. It reached the zenith of its prosperity during Akbar’s time when it became a district headquarters for the province of Agra and a mint was set up to give it greater importance.

Like much of rural Punjab, Narnaul has produced several Sufi saints, the most venerable being the 13th-century pir, Shaikh Muhammad Turk Narnauli. Later, in Akbar’s time, there was the Chishti Shaikh Nizam al-Din whose fame as a man of learning has been recorded in the Ain-e-Akbari. The Shaikh died in 1589 and was buried in a square stucco-covered tomb built in the severe no-frills Lodi style. Once a popular pilgrimage site, Shaikh Narnauli’s tomb is somewhat overshadowed by the enormous mausoleum of Ibrahim Sur in its immediate neighbourhood.

While the Great Mughals were busy leaving their mark, architecturally and administratively, on the bigger cities of Delhi, Lahore and Agra, it was the lesser nobility, the chieftains, jagirdars, mansabdars and soldiers of fortune who were busy transforming the provinces. The monuments of Narnaul are a testimony to the skills of local artisans who, working under imperial architects, could produce buildings of quaint charm that were often lifted as blueprints for monuments across the length and breadth of the burgeoning Mughal empire.

One of the most spectacular buildings in Narnaul is the Tomb of Shah Quli Khan, a general in Akbar’s army who by the time of his death had risen through the ranks and amassed high titles and great wealth. His tomb built in 1574 bears an uncanny resemblance to Qutb al-Din Muhammad Khan’s tomb in Baroda built 10 years later. The point here is that regional styles travelled out of the provinces and over a period of time created a pan-Indian style. The tomb is built atop an octagonal platform in a style reminiscent of the Lodi and Sur kings. Interestingly, the monument, built some 25 years before his death, was used by Quli Khan as part of a residential estate. It has the most stunning combination of grey marble and blood red sandstone and the most imaginative and symmetrical use of blind arches. Several years after building his tomb, Quli Khan added a magnificent multi-storied gateway, known locally as Tripolia Gate.

Quli Khan clearly enjoyed living in Narnaul for, after the tomb, he built a huge pleasure resort in the classical Iranian style of situating buildings inside or at the edge of water tanks. It’s popularly known as Jal Mahal but Quli Khan had named this complex Aram-e-Kausar after the fabled pool in paradise whose waters are said to grant immortality. An arched causeway leads to a flat-roofed pleasure pavilion topped with chhatris, distinctly reminiscent of the Diwan-i-Khas in Fatehpur Sikri, sitting in the centre of a waterbody. Today the gardens have gone to seed, the tank is bone dry and the pavilion looks shabby and unkempt.

The same story of neglect is repeated in virtually every building in Narnaul. The pièce de résistance, the monumental tomb built by the Afghan ruler Sher Shah Sur for his grandfather, Ibrahim Sur, is surrounded by piles of filth. Born in Narnaul, Sher Shah chose to build this grand mausoleum over his grandfather’s modest grave in 1542 — 50 years after his ancestor’s death. The tomb’s façade reveals a plethora of styles and a bewildering variety of ornamental details. First, there is the striking use of pink and grey marble offset with judicious use of red sandstone. Its interior is as wondrously decorated as its exterior. The west-facing qibla wall has three mihrabs or niches, each decorated differently. It’s impossible to take in all the details at one glance.

You leave Ibrahim Sur’s tomb, and Narnaul, wondering how something so out of the ordinary can lie hidden in this nondescript town and not draw attention to itself!

Narnaul is about 75km southwest of Delhi in Mahendragarh district of Haryana. 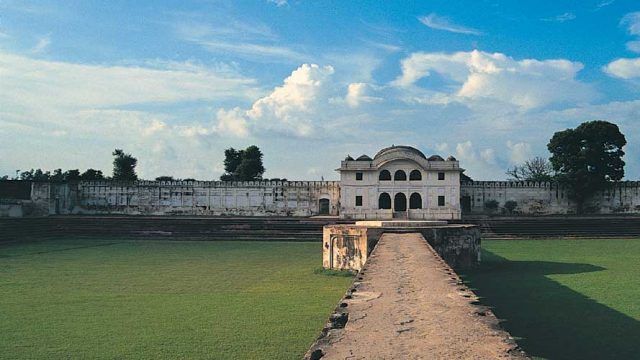 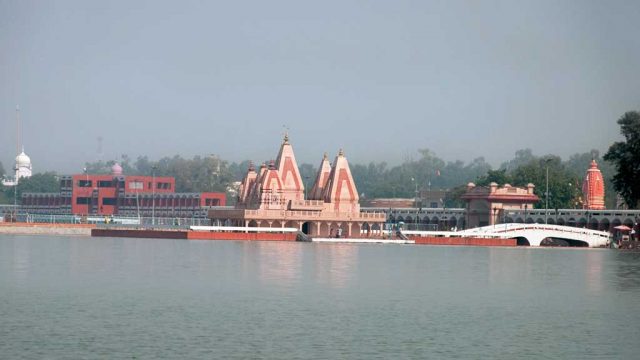 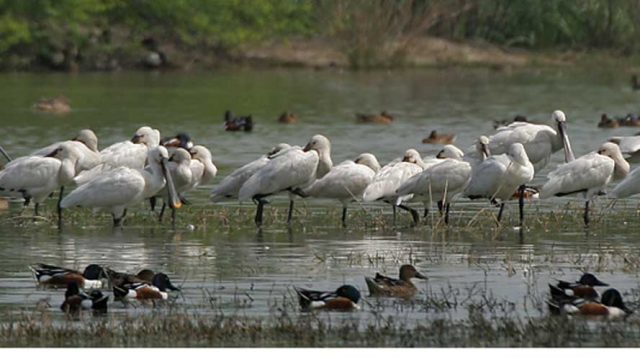