Nathalie clapped her hands and shrieked, “We’re going to Corse!” looking, as she tends to in such

moments, more like a 14-year-old than usual. She also tends to mangle together her French and English when excited, or angry, or confused, or in any of the emotional states Latin people are known for. I smiled back, not yet feeling the excitement, considering I had yet another night shift to work at my 24-hour news channel job.

The excitement hit only on the boat. The sight of the Mediterranean always gives me that buzz, that travel rush, to be so far away from anything I know. An elixir-blue and aquamarine sea, the colour in books and movies and postcards and paintings, completely surreal. Translucent waves crashing against the red rocks of Nice as the great five-storey ship chugs its way out of the vieux port.

The crossing was long. Dolphins chased the long wake of the boat in the distance, jumping clear out of the water. And then, six hours later, in the orange-golden glow of the evening, there it was. The long, mountainous ridge of the Cap Corse.

When Greek sailors first landed on Corsica, they called it Kallyste, island of beauty. Nearly 3,000 years later, not much has changed, except Odysseus’ Laestrygonian giants are nowhere to be found. The island is still as beautiful, with restricted development, and a geography and climate that goes from seaside Mediterranean to Alpine within an hour’s drive. The people remain somewhat wary of outsiders, as is to be expected of an island that has been quarrelled over ever since the Romans, and was last sold by the Genoese to the French, thus giving the Corsicans their incidental nationality.

Of course, the Corsu-speaking people still can’t get used to the idea of France, even giving up the Corsican-born Napoleon to hail the freedom-fighting Pasquale Paoli as their hero. Earlier the FLNC, their local bunch of brave freedom-fighters, would blow bombs here and there, killing the odd official or two, but that’s replaced nowadays in favour of defacing French signage with shotgun blasts and graffiti, leaving just the Corsican names.

The grandparents Humm met us with their car in the large northern port town of Bastia, ready to tackle the steep, narrow, completely Uttarakhand-like roads of Corsica. Their house in St Florent was on the other side of the Cap, a small town on the sparkling Golfe de Florent, nestled in the junction between the forefinger and the fist that is the shape of the island. We were going to be staying with them in the northern Cap Corse area.

Ivan and Helen Popoff are hotelier-restorers, Ivan being the son of the Humms’ old family friends. One day in the 1970s, the Humms and the Popoffs were driving around northern Corsica, looking around. They had decided to buy a country home on the island. Thirty years ago, Corsica was even less accessible than today, with a once-a-week ferry, no tourists and one travel agent in Paris.

On the way to a mountain village in the Nebbio, magnificently lit by the setting sun, under vast mountain cliffs, they found a dirt track leading down into an abandoned olive grove. The Nebbio, fertile valleys and highlands terminating in St Flo, produced honey, chestnuts, wine and olives for millennia. In this paradisiacal corner they found a crumbling, ruined church and monastery, surrounded by ancient olive trees.

It was the Cunventu San Ghiseppu or the Convent of St Joseph. Founded in 1630 around a 12th-century church, it had been left to slowly fall apart, the still-roofed parts being used by shepherds to shelter their sheep and goats. They bought it.

Taking the years it needed, they slowly renovated the entire place into a working olive grove and rustic holiday resort. The olive trees, the oldest an astonishing 2,000 years, began producing exquisite, exclusive oil in 1991, which retails now at about 100 euros a litre.

In Santo Pietro di Tenda, a tiny village perched just below the rocky hills, the insular locals continued to settle matters with their codes of silence and vendetta in internecine disputes.

But it has never translated to real war, apparently. Grandpa Humm asked me rhetorically, “Do you know why the olive tree is a symbol of peace?” I didn’t, so he continued. “Because an olivier takes at least 30 years to grow, so a fire in the intermediate time means that there will be no olive trees… and in wars, they used to set fire to the countryside. An olive tree means that there has been at least 30 years of peace.”

Helene and Ivan had been working on the monastery for the last decade, trying to set it up. The entire building has been divided into three ‘apartments’ each with a complete kitchen, even an ancient wood-fired stone oven, in case one of the guests has the desire to cook a real pizza.

We had the desire to eat, and the best food in the area was to be found at the cryptically named The Farm.

“It’s le ferme de something,” said Nathalie. That didn’t exactly explain anything, until we got there. Occupying a secluded hilltop halfway between St Florent and Bastia, it was actually a typical Corsican farm, built with stones stacked together sans mortar. And that was where it stopped being typical. Tables were booked two months in advance by those in the know of this Michelin-listed culinary delight.

The menu was set. Fifty euros a head, eat what you are given. We started with a Corsican soup: seasonal vegetables and potatoes flavoured with garlic, onion, thyme, floating in a bouillon of sausages. Followed by baignets de brocciu—deep fried brebis mountain-goat cheese, accompanied by Corsican charcuterie.

Then the main dish (!) was a ragout of wild boar with a side of aubergine sformate, followed at last by an assortment of Corsican cheese with different confitures, including fig and tomato. With a secret weapon! A liquid cheese so strong that, like marmite, it was manageable only in very small quantities on a piece of bread, which it flavoured strongly with its sharp fermented taste. Grandma Humm marvelled at my taste for cheese. I told her I grew up on Asterix. A Patrimonio red wine accompanied it all, except for dessert (sweet brocciu), had with eau de vie. Bien content, we headed back to St Flo.

I am one of those people who can’t deal with sitting still, unless it is for the express purpose of procrastination. Blue seas. Shallow beaches with crystal waters, like a massive swimming pool. I swam. I watched Nathalie roast herself in the sun. I needed more. “Go to the ecole de voile!” she said, pointing me towards the St Flo sailing school. It was a hundred yards away.

“Pas de problem, let’s go,” said Tarzan. “Don’t I need to do anything beforehand? Like, I don’t know, learn some stuff?”

“Nope, you just need your bathing trunks, and yourself. In the scuba ‘baptism’, we take care of the rest.”

Already in my bathing trunks, I jumped on the boat.

There were a couple of others. An 11- year-old girl, her 14-year-old sister and a scattering of older people. Near a rock formation on the coast called ‘the Sphinx’, they threw me in the transparent water. Ten metres below I could see kelp waving on the sea floor. Schools of tiny fish were passing by. Clean your mask, said my instructor. I duly spat into it. I was given a few instructions—equalise your ears like this; fix your mask like this, these are the basic hand gestures. Then she pulled my cord and I passed the portals into the planet of the Deep Blue.

The Laser Masters Sailing Champion- ships two days later put an end to all ecole de voile activities—no more scuba or windsurfing for us. Tarzan grumbled. We had to find other things to do.

Nathalie and I got up earlyish, around 9 in the morning, to take the boat out to explore the hidden beaches in the Desert des Agriates. During Roman times, the ‘desert’ was a breadbasket. Over time various environmental problems caused the farms to be abandoned, and now it’s a nature reserve — also hiding Corsica’s two finest beaches—the Plage de Loto and the Plage de Saleccia. The latter was where they apparently filmed the invasion sequences for The Longest Day.

We found ourselves a small, secluded beach before Loto. It was still cold, the sun not being out long enough to warm the air and water. Yachts great and small were still moored out in the sea, just outside the rocky pier of the port.

On the other side of the bay, a short 15-minute ride later, was a small enclosed beach, the shallow water turning a light aquamarine blue, the light sand visible for metres underneath. Further down the hilly coast we could see the ruined Martello Tower.  Then we swam and lazed some more. Calvi, Ajaccio and all of southern Corsica would have to wait for another trip 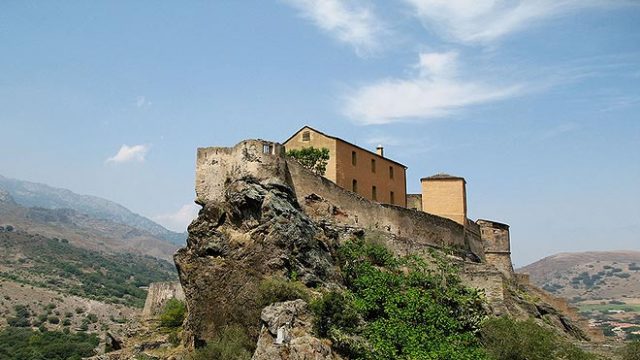 Walking and cycling through Corsica