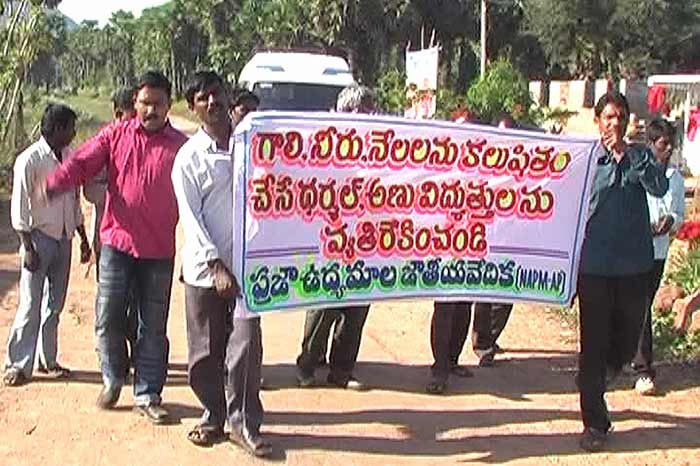 Earlier this year, sustained protests brought nationwide attention to the 2,640 MW thermal power plant proposed on precious wetlands in Sompeta in the coastal district of Srikakulam. Last month, the Andhra Pradesh High Court cancelled the allotment of 972 acres in the district to the Nagarjuna Construction Company. Now, Srikakulam is in the news again: tension is simmering around Pedda Kovvada and Chinna Kovvada villages, near which the Nuclear Power Corporation of India (NPCIL) plans an N-plant with six light water reactors of 1,500 MW each with know-how from General Electric and Hitachi, uprooting in the process people from 12 villages.

The fertile agricultural land of these villages yields paddy, coconut, banana, casuarina and corn. People also earn a living from fishing. Determined to keep their livelihood, locals led by voluntary groups and environment activists have been staging dharnas to oppose acquisition of land for the project. However, G.V. Ramesh, chief engineer of the NPCIL project, defends both the acquisition and nuclear power: “Our fossil fuels are running low and we need nuclear power. Of the 2,000 acres required for this plant, NPCIL has acquired 1,200. We need just 800 acres more.” He talks of a “liberal” resettlement package, which includes construction of some 2,000 houses, a boat jetty,...