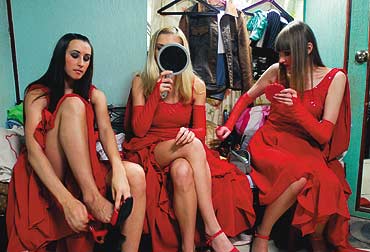 outlookindia.com
-0001-11-30T00:00:00+05:53
"Back home in Ukraine, I'm also a journalist," says Tamila with a sigh, "And whenever I see a journalist and photographer, I'm always homesick." In her red dress, heavy make-up and platinum-blonde hair blow-dried into a cloud around her face, she makes an unlikely looking reporter. But she's not in Mumbai as a journalist. Tamila and three other Ukrainian girls are extras on a film set, where they're required to do little more than stand on boxes and dance. After this assignment, there are plenty more lined up, because there's a huge new demand for foreign talent from casting agencies in Mumbai.

Back in Delhi, two European women hand out business cards to young filmmakers. They run an 'expat talent agency' supplying people from overseas for ad films, documentaries and even voiceovers. "It's the first of its kind in Delhi," says Penelope Spencer, one of the people who runs it. When we speak to her, she's on location in Rajasthan, with five foreign extras, doing a documentary for the BBC on the Raj. "Not everyone has acting experience," she says, "but they have done a little bit in school and college."

While some foreigners travel to India for the express purpose of doing advertisements or dancing in a Hindi movie, most are just tourists, looking to make an extra buck while they're vacationing. That's where Annabelle comes in. Referred to us by quite a few people in the film industry, she seems to be the one-stop shop for all things foreign. "We scout for character actors and background roles, but we also do shows and look out for bartenders with flair," she says. When she started out, in the 1980s, there was already someone supplying the extras. So she took it upon herself to round up people for the film Mann, quite simply by going to Colaba, where foreigners in Mumbai tend to hang out, and by spreading the word.

"Now, I have someone to do it for me," she says, smugly. "We hand out cards to people who look like what we're looking for. They go back to their hotels and check with the managers. Since most of the hotels know me, it's quite simple. I had to supply foreigners for Rang De Basanti, 300 for Mangal Pandey and for The Legend of Bhagat Singh. I had to look for 250 white men only." It's not always easy going though, she recalls—after the bomb blasts, she had to find 300 people for a Dharmesh Darshan movie. But given her acclaim, now many visitors come to Mumbai and contact her. Being in a Bollywood film is even listed in the Lonely Planet guide under 'Things to do in Mumbai'. 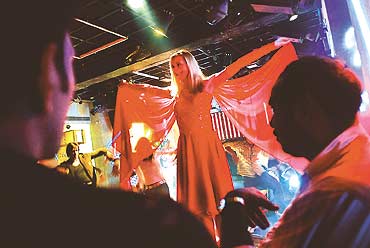 Roles as extras and bit parts are for amateurs, but there are also a slew of people looking to work professionally in the entertainment industry in India. "When there's an international brand based in India, the company is local and the agencies are local, but they still want to preserve the image of their brand," says Ankit Mehta of Inega Model Management, which works on supplying foreign models to apparel companies like Kimaya, Van Heusen, Manzoni and Ravissant. "A couple of years ago, they used tourists, but now foreign models are available in India as well."

Mehta brings in the models for a couple of months, either for a direct booking assignment or to shoot in different ads. They are put up in apartments and spend a couple of months in India. Why this demand for foreign models? "Earlier they were brought in for lingerie ads because that's something Indian models wouldn't normally do," explains Mehta. "But now foreign models are perceived as more professional, and the cost is about the same." Is there a preference for people from any particular country? "Not really," says Mehta, "The Asian look doesn't work much but I have models from all over the world."

Some, like Scotsman Dave Walker, stay back to make their mark on the industry. Walker and his half-sister Yushi are planning a venture to supply "high quality international entertainment" to Mumbai nightclubs. Walker had his brush with Bollywood when he met Annabelle and subsequently was an extra in the film Babul.

All that is in the past, his new role as consultant to his sister is now taking full priority. "We want a certain class," he says, "Which is why we can't use Indian dancers: we want to market stuff like they have in the UK and US." Yushi, 21, tosses her hair back when asked why she got into it in the first place. "I've trained as a DJ," she says, "So I've seen a lot of nightlife, and my friends were talking about how the night scene here is so boring." Walker disagrees: "The nightlife in Mumbai can be compared to anywhere in the world."

A western woman from the next table signals to Yushi. She's overheard the conversation and wants to be contacted if they need a dancer. "That's how it works," says Walker gleefully.

Back at Mehta's office, a tall Polish model disentangles herself from a computer terminal. "I have to run," she says, "I'm late for my yoga class." From yoga and Vipassana meditation, to earning an extra buck, tourists have never had such a wide choice of things to do in India.