It's reigning women, much to the distress of the nation and its men 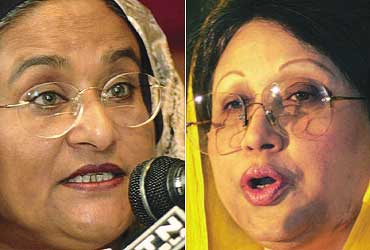 You could think of it as a male backlash, or the inevitable bitterness that seeps in at the crashing of hope. Nearly a year after Khaleda Zia swept into office, she's already alienated a large chunk of those who voted her bnp. Raging lawlessness and rampant corruption have made many prognosticate that she might be forced to step down before her term expires.

But what's the alternative: Sheikh Hasina? People can only recall her contempt for the rule of law and her inability to govern. Laments leading political commentator Prof Serajul Islam Chowdhury, "The nation seems to be pathetically caught between the whims of the two ladies. There's no credible alternative and people do not have much choice but to accept their leadership."