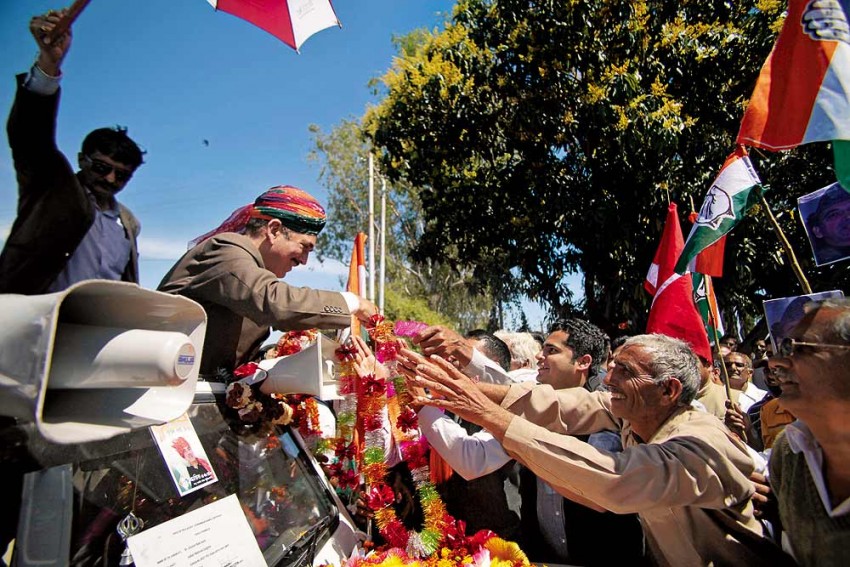 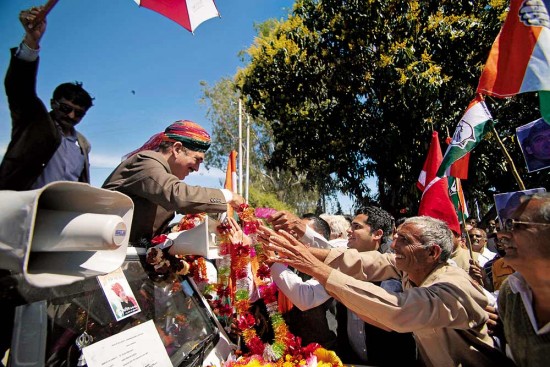 Under an overcast sky, the motorcade of Ghulam Nabi Azad, outgoing health minister in the UPA government, crawls along a dilapidated road before entering a dusty village. It’s supposed to be a road show. Azad himself is standing in an open jeep, accompanied by several partymen and surrounded by enthusiastic supporters, about a 100-odd. Yet he looks pensive.

Some distance away, local artiste Gani Gujjar is dancing in celebration, indifferent to the candidate and his carcade. He had been engaged by the party to entertain onlookers till Azad arrived. But even after he does, the 300-odd people seem more mesmerised by him than Azad.

The carcade moves on after a while as Azad and local MLA and minister of state for cooperatives, Manohar Lal Sharma, wave to the gathering. They also try to smile, but it requires visible effort. Things are not quite favourable for the reluctant candidate. Azad makes no bones about the fact that he did not want to contest, but was forced to after the party denied nomination to his lieutenant, Choudhary Lal Singh, who remains conspicuous by his absence by Azad’s side.

A day earlier, he had addressed people in remote areas, remotely. Weather, his followers insisted, had played spoilsport and did not allow his chopper to take off. It left Azad with no option but to address people through a long-distance telephone call, amplified by loudspeakers.

“Aap sab Azad hain (Each one of you is Azad, not just I),” he tells his audience, inspired perhaps by Kejriwal or more likely by the Bollywood film Main Azad Hoon, in which Amitabh Bachchan deli­vers similar dialogue. Azad sounds listless and his appeals to beware of divisive politics and vote Congress fall flat.

Ghulam Nabi appears listless, a reluctant candidate who had to step in after the party denied his deputy a nomination.

The crowd is relatively larger and more enthusiastic in his home district Doda. But his whirlwind visits and poll pitches lasting 15-odd minutes don’t seem enough to move voters. The constituency, once a Congress stronghold, appears to be polarised on communal lines. Azad, complains Thakur Chauhan, did nothing to improve healthcare in the area despite being the Union health min­ister. Most of the hospitals at tehsil and block levels don’t even have ultrasound or X-ray machines, he complains.

Others say welfare schemes like NREGA and NRHM benefited only unscrupulous government functionaries. “After communal clashes at Kishtwar, members of a particular community (read Mus­lims) are getting gun licences easily,” assert some Hindu voters; they want a representative “who ensures us security”.

Azad, who was the first chief minister of the state from Jammu region, had to quit in July 2008 after coalition partner People’s Democratic Party withdrew support over the Amarnath land row. While the BJP does not have any leader in Jammu with Azad’s mass appeal, he is largely viewed as “the right man in the wrong party”, whose secular credentials and ‘development man’ image in the state have been upstaged by the BJP’s ‘development’ icon. Azad’s brother, Ghulam Ali Azad, had joined the BJP in 2009.

The BJP is riding the Modi wave in the state. Two rallies he addressed—one in December last year, another in the border town of Hiranagar in March—saw crowds of 80,000 and 20,000 respectively, a record of sorts in these areas.

Local BJP leaders have been holding meetings at village and panchayat levels. In districts like Doda, Kishtwar and Ramban, they are focusing on Hindu majority areas and referring to the communal clashes at Kishtwar and the land row agitation in Amarnath, blaming the Congress-NC alliance.

The party has also fielded a new face, Dr Jatinder Singh Rana, and denied a ticket to Dr Nirmal Singh, who lost the last two elections by a whisker. A diabetes specialist, columnist and impressive speaker, he is ironically the brother of Devender Singh Rana, senior NC leader and advisor to CM Omar Abdullah.

Dry Thoughts In A Dry Season