Writing letters was something the man loved. He wrote to everybody, even strangers. 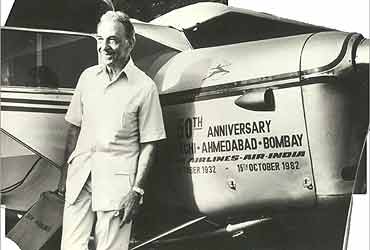 J.R.D. Tata: Letters
By Edited By Arvind Mambro
Rupa Pages: 504, Rs 595
India owes more to the house of Tatas than to any other industrial family for putting it on the path of self-sufficiency in areas vital for its survival in the modern world. They were pioneers in many fields, from production of steel, hydel power, airlines, automobiles and nuclear research down to the production of cosmetics and tea. And in every undertaking they strove to make their products as good if not better than their rivals'. Along with these money-making enterprises, they built hospitals, educational institutions and extended patronage to the arts. More significantly, while other industrial houses were not averse to kowtowing to ministers and civil servants to get their deals through, the Tatas maintained high standards of rectitude (unique to Parsi industrialists and professionals), untainted by personal greed. Till recent years the Tata board of management was entirely Parsi.

The Tata success story begins when Jamshedji Tata (1839-1904) set up a company to mine coal and iron ore in Bihar. In the years to come, it became India's largest steel production centre, the city that grew around it renamed Jamshedpur. The real diversification and spectacular upsurge in Tatas' fortunes came during JRD's 52-year tenure at the helm of its affairs. He took over as chairman at the age of 34 and guided its course till he died in 1993.

Jehangir Tata (Jeh to his friends) has been much written about. Arvind Mambro helped compile his speeches (he hated making them) and now his letters—he loved writing them. They add a lot more to the reader's information about the man. Among the hundreds he wrote to were men like Mahatma Gandhi and Jayaprakash Narayan, a succession of prime ministers from Pandit Nehru, Indira Gandhi, Morarji Desai to Rajiv Gandhi. He wrote to fellow industrialists like G.D. Birla, Shri Ram, Mrs Rockefeller, Bata et al. He wrote to authors, artists, musicians; to neighbours, school children and total strangers. What he wrote was lucid, candid but kindly and often with a touch of humour.

JRD was born in Paris. His father was Parsi, his mother French. He spent the better part of his younger days in Paris, and French was his mother tongue. He was sent to a grammar school in England for two years. Being hard-working and studious, he picked up English and began to speak it as fluently as French. He was anxious to join Cambridge but his father summoned him to Bombay to join the family business. He developed a chip on his shoulder for never having gone to university. Bombay was his home for the rest of his life. Though he frequently asserts being an Indian (many Parsis do so grudgingly), neither his biography nor his letters reveal whether or not he could speak Gujarati or any other Indian language.

How much of a Parsi was he? In a letter, JRD wrote: "I am anything but a good Zoroastrian, at least in the sense of being a practising one." I'm not sure if he ever went inside an agiary—the Parsi fire temple.

JRD was unabashed about the positive role of capitalism in a developing country. The word had become synonymous with a bloodsucker of the poor. He took up cudgels on its behalf against the half-baked socialism preached by Nehru and JP.

Flying and fast cars were his abiding passions. He was the first Indian to get a flying licence and competed in the Aga Khan Trophy for the fastest to fly from London to India. He was beaten to the second place by another Parsi, Aspy (later Air Chief Marshal) Engineer. He knew every new kind of airplane from two-seaters to jumbo jets. It was the same with racing cars, his favourite being a Bugatti.

JRD had a very sharp eye for detail. Every time he travelled on his own Air India planes, he put down his suggestions: Why did coffee and tea taste the same? Why two paper bags of sugar with each cup? Why were omelettes leathery? When staying in one of the Taj Hotels, he noted that one large double bed disturbed the sleep of elderly couples; telephones in the bedroom and the bathroom should have separate numbers. When sent a sample of Lakme products, he tried out every item from shaving creams, deodorants and colognes and compared them with the best products abroad. Once visiting Rashtrapati Bhawan, he noticed a gaffe under the portrait of the President. It read "President swearing at ceremony." He wrote to Babu Rajendra Prasad informing him of the difference between swearing in and swearing at.

JRD led a full life and he parted without any regrets. The last words he spoke were in French: "I am about to discover a new world. It is going to be very interesting." Jeh's been gone for many years but his footprints will remain indelibly printed on the sands of time.

Down The Rapids? Rock The Boat