When change of religion was all about a deeply personal choice 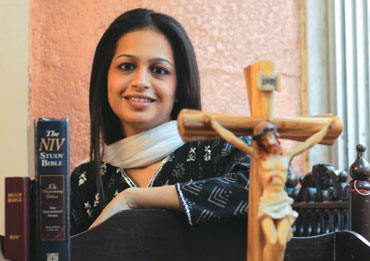 outlookindia.com
-0001-11-30T00:00:00+05:53
If one goes by popular perception, it’s only people belonging to the Scheduled Castes and Scheduled Tribes who are lured by Christianity. The notion is that they give up their religion to break free from the Hindu caste system and nurture the hope that a better life awaits them after they convert. But it’s not just the oppressed classes who are drawn to Jesus. Highly educated and well-placed upper-caste Hindus and Muslims have also risked censure from their immediate family and community to take the crucial plunge.

They all have their own reasons for giving up one religion for another. As Jesuit sociologist Rudolf C. Heredia puts it in his book, Changing Gods, Rethinking Conversion in India: "Conversion is a question of personal choice, it involves a rejection, a change or an adaptation of one’s identity. A complex set of motivations are involved. The change is the result of a personal quest, which may be more than a religious or spiritual one. Positively, this is experienced as a liberation; negatively, it could be an escape."

So what is it like to switch from one god to another? Outlook spoke to some unlikely converts:

"I was born in a rich Muslim family of Pune. My parents belonged to families with a rich religious heritage. When I was barely four, my parents separated. My mother and I moved in with my aunt in Hyderabad. From an early age I was taught Islamic traditions and I also learnt to read the Quran in Arabic. However, I went to schools run by the Jesuits and did well both in studies and sports. My mother and I shifted to Mumbai when I was in the sixth standard.

"It was during this period that I began carefully studying the Quran. However, I found I could not digest the teachings. Yet I did not stop believing in God's existence. This was in the late 1980s. My teenage years and early adult life were difficult—failed relationships, financial hardships and my father's death made me morose. At one point I even decided to end my life by consuming mercury. Luckily, I survived.

"It was all very strange. On the one hand I was attempting suicide, but at another level, I had an out-of-body experience. I felt my spirit drift to my old school—to the feet of Jesus Christ. I could feel his presence. After a year, I visited the school and saw the following words engraved on the pedestal on which a statue of Jesus stands to this day: 'I am the resurrection and the Life.' I believe the Holy Spirit had led me to Christ. Today, I am serving the Lord through the gifts that he has endowed me with.

"Naturally, some Muslim friends did not approve of my giving up Islam. The clerics questioned my change of faith. However, this only strengthened my resolve to study the Bible, the Quran, and the Hadiths. Finally, I realised that Christianity was my true calling."

"Information technology companies require a strong process, otherwise there will be a delivery failure. There are proven processes of development and it is for the company to adapt them and standardise them.

"This also holds true in life. I was in my twenties and my life was a total mess. I had no peace of mind. I was going through a personal crisis. It was then that somebody gave me a book on Jesus. It slowly transformed me. My parents saw the change in me but allowed me to choose my faith. I go for prayer meetings regularly and I have renounced all forms of idol worship."

"My mother was a Catholic who converted to Islam when she married my father. We performed namaaz regularly. But my faith was shattered when I came across a verse in the Quran that prescribed corporal punishment for stubborn women. I was shocked. I asked my father, who told me that it was like chiding a child for not listening to elders.

"After my parents separated, I moved in with my mother, who had become extremely short-tempered and abusive. At the same time, she started attending church. I used to attend the congregations she went to, at which people danced and sang, something unheard of in Islam. It was then that I started reading the Bible. I found Christianity a far more liberating religion. My life became stable, and I started doing well in my studies. I have been praying every day ever since."

"Born into a Tamil Brahmin family, I was brought up in an orthodox religious environment. We worshipped numerous gods and observed various rituals. Every Thursday, we also prayed to Sai Baba. At least 150 devotees would turn up at our house for the prayer sessions. Frankly, I could not make any sense of the rituals and yearned for a relationship with a god I could talk to, a god who would listen to me when I spoke to him.

"It was around this time that I was afflicted with scabies. I decided to go for a blind date with Jesus in the hope that I would be cured. To my surprise I was rid of my ailment. Years later, at 27, I decided to read the Bible. My mother threw it out of the window. But I did not give up and discovered a god I could talk to. Ever since, I have become far more friendly, and the love of god has changed my life. Today, when I speak, God speaks to me. My relationship with the Almighty has changed my perspective. I have become more respectful towards others."

"I was 14 when I lost my father and our family lost everything in the process. From prosperity to penury—it was difficult to comprehend at that age. I could not understand how there could be so much suffering if god actually existed. How could he allow people to get away with evil acts? A chance encounter with a young man turned me to Jesus. I read the New Testament carefully and realised that evil is the consequence of man not loving god. Jesus presents a challenge to every individual, asking him to acknowledge his own inadequacies. Over the years, I have found myself moving away from being a selfish person to being more sensitive (to the needs of others)."