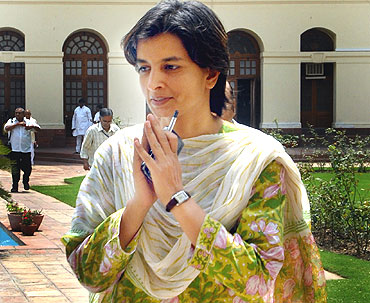 "Woh to houselady hai, madam, houselady," said the Uttar Pradesh bureaucrat over the phone, clarifying the background of a woman MP from his state, fielded by none other than UP's First Behenji, Mayawati, in the just-ended elections. Her Bahujan Samaj Party's four women MPs (all first-timers) make up an impressive 19 per cent of the BSP's strength in the 15th Lok Sabha, almost double the all-India average for women's representation in the House—not surprising, you would say, for a party headed by a woman.

What is a revelation, though, is the kind of women this fiery, feisty self-made woman politician has catapulted to Parliament: political wives, all of them, riding piggyback on a powerful husband. Raj Kumari Chauhan, the one described memorably as a "houselady" by my informant, is the...