“You, Sister, Will Be Raped” 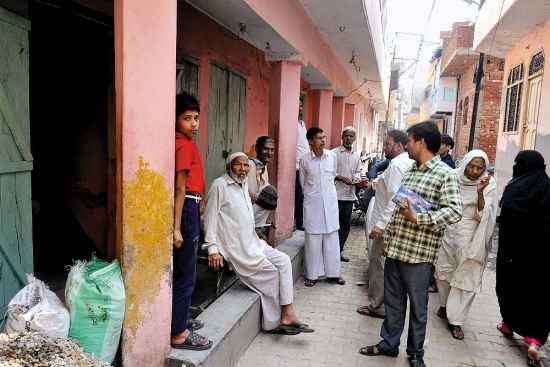 What I saw in Hashimpura in the summer of 1987, would shape and define the way I reacted to public events from then on, particularly on the issue of Muslim stereotyping/marginalization. It was the first place where I learnt to hide my name in a communally loaded atmosphere and mumble Sudha or Shobha if people insisted on knowing. I was shaken out of my middle class cosmopolitan upbringing by the hate that confronted me there.

That summer I had just begun the process of looking for my first job as a journalist in Delhi (I had also approached Vinod Mehta in one of the newspapers he was editing at that time but had been politely turned down) and so my status was "unemployed". Riots had broken out in Meerut just two hours drive from Delhi and I just tagged along with a reporter from the Indian Express.

We reached the city that was under curfew and acquired curfew passes. There had been mob arson, communally loaded speeches, skirmishes, but till that point no massacre had been reported. At the DM's office itself it became clear how prejudiced the system was. There was so much abuse about the Muslim community that we decided to not mention my name from then on. We stumbled on to Hashimpura much before the national media arrived there after bodies were found floating down a canal. I will just narrate the sequence of events as they unfolded:

Army convoys were patrolling the main streets. We were told about an area where the Hindus had organized themselves. We went there. On one side of the road was a middle class Hindu neighbourhood, on the other side a ghetto of weavers and labourers who were predominantly Muslims. It was called Hashimpura. The Hindus had set up vigilance committees to patrol and rebuff the Muslims whom they said would come and rape their daughters.

Fanning such flames was a platoon of the PAC led by a DSP rank officer. He told us very clearly we can't go to Hashimpura. The people there had stockpiled arms, they were raising Pakistani flags, it was dangerous and they would kill "normal" Indians and you sister, would be raped. It was not easy to give the PAC the slip as they seemed set on following us around "for protection".

Eventually on the second day in Meerut we did enter the gallis of Hashimpura quietly. There were bullet marks on the wall although it is hard to think of some-one finding enough elbow room to shoot in such a narrow lane. There were no happy children, usually the first to come out and meet strangers in such mohallas. There were many women, terrified and weeping. There were little homes that had been ransacked and many had looms to weave cloth that were now silent, no longer humming.

The women immediately surrounded us to share the tale of how some days ago all the males including teenage boys had been rounded up and taken away. One old man was left, grief written all over his face. He had been called some days ago to identify a body in a grave that was of his son's. The other sons husbands brothers had all gone. This then was the den of rapists…

Food and water was running out as those left were encircled by police and army and could not leave, to work, earn, buy food if any money remained. That is why I remember the two glasses of roohafza that were produced for us in spite of our protests. It was precious liquid but then they said we were the first people to come after their days and nights of horrors.

The story that was filed about Muslims being picked up and carted away en masse was not carried by the Indian Express, whose editor at that time would later become a BJP MP and minister. Some days later when bodies were found floating down a canal another national daily broke the story of the massacre after which everyone followed. I imagine we must have landed up in Hashimpura when the men had already been shot dead and dumped into the canal but the story had not broken. The PAC was acting jumpy because they were covering up a mass crime. But some evidence had already been photographed. Praveen Jain, then working as chief photographer in the Sunday Mail, happened to be in Hashimpura on the morning of May 22, 1987 and clicked powerful photographs of the men being rounded up, hands held up, in what appears to be a Gestapo like operation. He is quoted as saying: "I thought the men were being taken somewhere to maintain peace as curfew had been clamped in Meerut". His photographs would also become part of the evidence in the criminal case. They have now been reproduced in the Indian Express where Praveen currently works. Life does move on and things do change.

But not for the victims. Last week I filled in the gaps in my own experience from 1987 when I spoke to the witnesses who survived the shooting. I shall narrate the story of just one, Zulfikar Naseer. He was in high school then. The police and military came to do a house to house, roof to roof, search. All the boys and men were picked up and taken to jail. There a ‘sorting" took place. The little boys and old men were kept on one side, the "naujawan" were taken on to trucks. They drove for some time, stopped and the butchery began. One by one they were taken out of the truck, two PAC men would hold them down, the third would shoot. Zulfikar remembers the names of Yaseen and Ashraf who were shot before him. A bullet went through Zulfikar's upper abdomen but came out from the other side. He pretended to be dead, was dumped into the canal, hung on to weeds and came out from among the corpses. He made his way to Muradnagar where a Muslim stranger helped him get private treatment. Eventually Zulfikar would tell his story to politician and activist Syed Shahabuddin who called a press conference about what had happened. At that time, the congress state government responded by denying that he was a resident of Hashimpura or that any such thing had happened in their watch. Zulfikar had to produce his high school certificates to "prove' his tale as if the bullet mark was not enough.

In 1987 the Meerut riots and Hashimpura massacre happened in Uttar Pradesh during the reign of the Congress. In 1989, the even more horrific Bhagalpur riots took place in Bihar under the watch of the Congress regime. Both of these will be remembered for police brutality, where the men in uniform would be so prejudiced that they would kill, blind, main people just because they came from a particular community. If the Congress could not curb the prejudice in its own police force, how could they stop the rise of the BJP and forces of hindutva, whose push had already begun? Simultaneously it was in a rather short time after these cataclysmic events in the two largest states of the country that Mulayam Singh Yadav would emerge in Uttar Pradesh and Laloo Yadav in Bihar. The Congress was finished in the Gangetic heartland. As for me, I became an adult in Meerut and Hashimpura was my growing up moment.