'You Need To Keep Talking'

Batsmen held steady, the pacemen swung it around. We followed the plot. 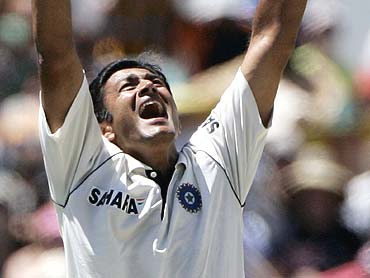 outlookindia.com
-0001-11-30T00:00:00+0553
My sixth Test as captain was also one of the most thrilling I've played, ending in the most satisfactory manner—we became the first team from the subcontinent to win at Perth. Everybody was upset and hurt after the defeat at Sydney and the events that led to it; as captain, it was my job to ensure that we remained positive.

I am acutely aware of my responsibilities as captain; they came along with the job, and I have to give it my best shot. I have the interests of the team, the players, foremost in my mind. As captain, I take the decisions that are good for them. And I back my decisions.

Batting first at Perth, for instance. Not many teams do it, but I thought that was the right thing to do on that track. It was the best way to put pressure on Australia. Once you have the runs on board, the opposition is always under pressure, irrespective of who they are and what the conditions are.

Virender Sehwag was brought back into the team to open after over a year—we were intent on playing positive cricket. He's a man who plays his own game, unrestrained under any situation, and gets the runs at a very brisk pace. I told him to play the way he knows best—just go out and smash the ball.

The other man who came in at Perth, Irfan Pathan, was given the new ball as he has the ability to swing it very effectively. Fourteen Australian wickets fell to our pacemen, indicating that they were sticking to the plan. Being a bowler myself, I possibly understand better what kind of fields they want and try to set them accordingly. This youthful pace attack is clearly enjoying bowling on Australian tracks.

Young Ishant Sharma was brilliant in both innings—bowling a probing line and getting Ricky Ponting twice. The second time around, he made life tough for Ponting, who somehow hung on. After seven overs, I was going to give him a breather but Sehwag told me that Ishant bowls much longer spells for Delhi. We asked Ishant to continue, and he got Ponting with a beauty.

Here, I might add that it's critical to communicate with the team—positive or negative views about something, everything. I keep emphasising that you need to keep talking—discuss plans, situations. If you keep it all to yourself and people don't ask questions, you don't disseminate the knowledge you've gained after 18 years of playing the game. Even the younger boys can teach you something new, come up with something that might help you win a game.

People are calling it India's best Test win ever. I don't know about that, but what I can say is that it was one of our most important victories. We were 0-2 down and after all that happened at Sydney, no one gave us a ghost of a chance. Winning without our main fast bowling attack—missing due to injuries—was very creditable.

The wicket was quick, the quickest in the series. But that's something we don't worry about—these are variables we cannot control, our job is to play. We made the best use of the conditions, executed our plans brilliantly. You can't go into a game with preconceived ideas about the pitch, the conditions. You do take history into account, but essentially, you go out there prepared for all conditions.

It was a euphoric win and we celebrated it aptly, but the challenge of the next game at Adelaide kept us focused. In international cricket, you can't celebrate much, you have another match coming right up. It was a historic win and we had dinner together. But we didn't go overboard—you don't do that after just one win.

The break after the Sydney Test did help. We had a couple of days off in Sydney before going to Canberra. It's always nice to get away from playing cricket all the time. We went out and had fun at the beach in Sydney, playing volleyball—everybody in this team loves volleyball. That was the best way to bond, as a team activity. We kept talking to each other, trying to keep ourselves focused on the task. It was important that we kept enjoying playing cricket, playing it the right way.

On a personal note, I crossed a milestone at Perth—when you start, you never think you will take 600 Test wickets! But you'd like to leave a mark when you finish your career, you don't want to be one of those players who come and go. I always had that faith and belief, even if some people thought I wouldn't come this far. When you play for this long, along the way, you keep crossing landmarks, and this one is very special. Anyone who wants to get 600 wickets must play a long, long time!

Finally, people ask me if I have a theory on why we push Australia more than any other team. Well, the answer is that we are a good and balanced team.

Perth Pangs And After