The new social creatures defined as flash-loving-idiots-with-peoples-pages-intense-excitement-syndrome on a relentless quest for gossip. 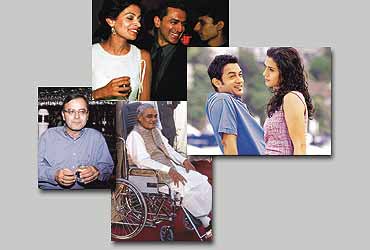 outlookindia.com
-0001-11-30T00:00:00+0553
Gossip is lifeblood for large sections of society but critical for the Flippie fraternity. For those of you who still haven’t caught on, Flippies are the new social creatures defined as flash-loving-idiots-with-peoples-pages-intense-excitement-syndrome. It’s the flashbulbs and the relentless quest for gossip that keeps them endlessly meeting each other on pointless night after night.

Great gossip is always about power, sex or death. Political gossip, part of the power trip, cuts across metros. The most speculated on item, of course, was the state of the PM’s health. How he had become energised after Gujarat, but otherwise every twist of his poor respiratory and alimentary canals were incessant part of this year’s gossip. Cabinet reshuffles are great focal points. When the Flippie set’s poster-boy Arun Jaitley was dropped, all of Delhi’s gossip circuit wondered what had been factored in to measure ministerial efficiency. Bombay, meanwhile, wanted to know if power minister Suresh Prabhu’s crash was because Thackeray needed cash. Money, as you know honey, is part of this power trip. So when the Ambanis hit a gas gusher, gossip swirled around about how long they had known. Some said around a year, others insisted it was three.

Parliament has always been the fount of endless gossip. Preening new moneybags, Vijay Mallya and Lalit Suri, overshadowing Amar Singh and Subbirami Reddy meant that gossip focused on the crores these two spent to get in; but exact figures depended on who you spoke to. Meanwhile, tongues were wagging about the censuring of two businessmen MPs. One got it in the neck, for fixing questions in Parliament in the manner he fixes things, and the other breached etiquette by asking questions about subjects he had a personal interest in.

Sex is always in. For those searching for sex of a deviant variety, there was this seriously slanderous letter that hinted at cross-generational incest in one of India’s biggest business families. There was also that liaison between consenting adults, now referred to as "The God, the Bad and the sexy". The really big one doing the rounds now is of one of cricket’s great heroes and his new secret squeeze of the moment. In Hollywood, it’s still about sex but here you have to throw in the Mafia. So gossip has it that it’s actually sexy sirens like Preity Zinta and Aishwarya Rai who make grown men like Bharat Shah and Salman Khan turn to putty.

Death becomes gossip. Gujarat’s death toll will never, specially after these elections, ever tally with the numbers that the gossip mill had churned out. It’s not just the numbers that don’t match. So when M.S. Oberoi died, the gossip circuit wondered how it would affect the bid to take over The Oberoi. When Raunaq Singh died, gossips insisted it was the corporate boardroom and not illness that finally got the indomitable Sardar. Natasha Singh’s almost forgotten sad demise still generates serious gossip, as society’s nubile and restless insist that a recent, rather public, marital collapse, was proof that the cops had no clue.

And for that one final bit of gossip that actually combines power, sex and death try this one—it’s that the Gates-aids mission is actually a macabre form of business foreplay. Gossip! Remember you heard it all here first.

(Dilip Cherian, image guru, shuttles madly within the corridors that connect India’s metros, doling out image strategy to corporates, stars and politicians. Gossip’s what he picks up along the way. )