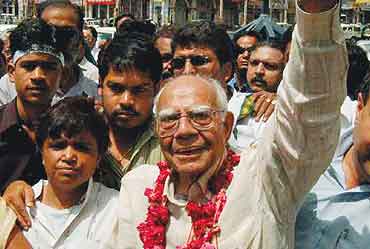 outlookindia.com
-0001-11-30T00:00:00+0553
What prompted Ram Jethmalani to flip-flop over contesting against Atal Behari Vajpayee in Lucknow? Jethmalani's close family members played a big part in his temporary withdrawal, sources told Outlook. The prime minister's public appeal, it is learnt, was also carefully planned to provide a dignified exit to Jethmalani.

The drama began on April 9 when Jethmalani swore to expose the various scams that the government had allowed its "friends and cronies" to commit. Following an English daily's story on Sonia Gandhi's supposed involvement in the Bofors scam, he alleged that Sten Lindstrom, the Swedish cop on whose revelations the newspaper story was based, was a "close friend" of defence minister George Fernandes. Sources in Jethmalani's office also reveal that the editor of a leading English daily met him before he filed his nomination and tried to dissuade him from entering the fray.

On the night of April 9, Jethmalani met Sonia Gandhi. By then, the government had given up on using sympathetic newspaper editors to deal with him and started building bridges with him directly. Fernandes also reportedly met Jethmalani, hoping to dissuade him from contesting. Subsequently, an official from the PM's office is believed to have made a call on him. Jethmalani doesn't deny that suddenly he had a string of visitors. However, he refuses to divulge what transpired in these meetings. "These are private meetings. Friends try to influence you. I can't comment on them," Jethmalani told Outlook.

On April 13, the day after Jethmalani filed his nomination, his family discussed the matter of his withdrawal. The same day, the pmo had reportedly sent urgent feelers to him that he would be allowed a "dignified exit" from the fray. "Certain promises were also made to his children. There was a suggestion about a Rajya Sabha nomination for one of the children and a possible posting as governor of Kerala for another," said sources.

Family friend and lawyer Kamini Jaiswal says there is no "conspiracy or design" behind Jethmalani's family asking him to withdraw. "He has had an operation recently. All of us felt he should not contest. It is ridiculous to suggest that the family would be moved by any consideration except his welfare," she says.

On April 14, Jethmalani was in Mumbai, slated to leave for London that evening to look up his ailing son, Janak, there. On the same day the PM made his public appeal: "Ram has filed his nomination to contest the forthcoming Lok Sabha elections from Lucknow from where I am also seeking re-election. Since this is likely to be the last election in which we will be active participants, I expect that he will reconsider his decision," the PM said.

Meanwhile, Jethmalani's friends in Mumbai too were trying to convince him to stay away especially in the light of the PM's statement. He finally succumbed and signed the letter of withdrawal in Mumbai before leaving for London.

On April 15, the PM filed his nomination from Lucknow. It was the last day of the filing of nomination, and a jittery Congress asked Akhilesh Das to file his papers. On April 16, the day of the scrutiny of the nomination papers, Jethmalani's withdrawal letter was faxed to the returning officer in Lucknow from Delhi.

Sources say that despite the fact that his withdrawal letter had been sent, Jethmalani was acutely uncomfortable with the idea. While his official stand is that the PM had not given him any assurance about his two pet campaigns-wind up the Phukan Commission investigating the Tehelka scandal and punish the guilty in the Gujarat carnage-close associates say that he was more worried about a loss of face. "What face will I show Sonia Gandhi," Jethmalani reportedly told a friend.

Meanwhile, his long-time associate and Congress spokesperson Kapil Sibal started mounting pressure. Activist Swami Agnivesh was the public face of the bring-Jethmalani-back campaign as he sat on a fast outside Jethmalani's house. On April 18, Jethmalani decided to brush aside his family's opposition and sent a letter to the returning officer in Lucknow: "Nobody has any authority to withdraw my candidature from the parliamentary election. I remain a contesting candidate," he said.

On April 19 when he returned to Delhi, Jethmalani told Outlook that the "friendship" the PM is talking about has to be based on certain principles. "He can't talk about us being friends while his ministers defend the Gujarat carnage. They are stifling the press. How can there be a 'deal' with such people?" he asked. Final words, perhaps, unless this quintessential maverick throws up yet another surprise.

Mind Of A Worried Man