Ayan Mukherjee takes the acc­epted way out. The traveller in me, ultimately, returned disappointed. 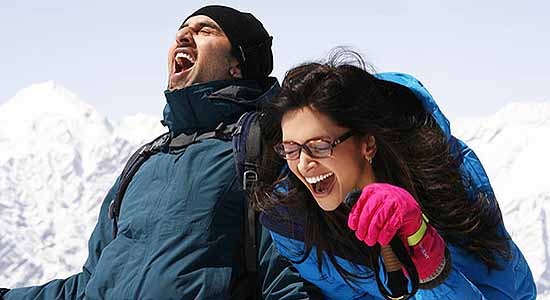 So, to cut a very long story very short, Yeh Jawaani Hai Deewani is yet another glam flick about falling in love, and in friendship. It’s about the familiar theme of commitment phobia, of refusing to acknowledge ‘the one’ till you are sma­c­ked into doing so. It’s about misunderstandings and perceived betrayals that pull friends apart and the intrinsic bond that, predictably, never lets them part. Besides, YJHD puts on display a leggy heroine in short skirts to go trekking in Manali and has her dress in a handkerchief of a blouse for dancing at a wedding. It also has vigorous, bouncy song-n-dance numbers that come from nowhere and elicit a fair bit of catcalls. But if YJHD is a protracted ad for the likes of makemytrip.com and FoxTraveller, it can also have a curious touch of the real if, like protagonist Bunny (charming Ranbir), you too have been a nomad at heart. To the world you might seem an irresponsible, selfish and confused rake but that’s what you are: a rolling stone on a journey in life. A journey that may have a few stops on the way but no definite arrivals. This “banjarapan” is captured well in Amitabh Bha­ttacharya’s lyrics for the song Kabira: Kisi thaur tike na paanv. The one to implicitly understand the drifter is the father, played with affection and grace by Farooque Sheikh. Or the dignified step-mother, Tanvi Azmi, who doesn’t want his passion for travel to die. These are brief roles, but standout performances—the scenes bet­w­een them give the film its emotional wallop.

The counterpoint to Ranbir is his giddy, blustery good at heart friend, played with spontaneity by Kalki Koechlin, who, despite unrequited love, decides to home in on another who cares for her. Or the hawt-in-specs heroine Naina (Deepika), who doesn’t believe in waiting. As the film sta­tes, none of them is ‘wrong’, only ‘different’ in the way they deal with relationships. It’s these warp and weft of urban relationships that could have been explored more. Instead, Ayan Mukherjee takes the acc­epted way out. He makes the traveller hero halt and settle down when he could have let him carry on, if not alone then in the company of someone significant. The traveller in me, ultimately, returned disappointed.