Yawn, It Was A Sleep Year

The Congress was in its teen blues, the BJP in a hangover. 2006 will wake everyone up. 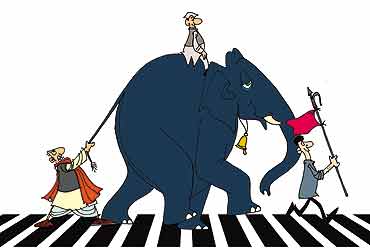 outlookindia.com
-0001-11-30T00:00:00+0553
2005 was the kind of year that doesn't deserve an annual review. Its highlight was its lowlight: a sordid story about an overripe son and a distraught father in which the first lost his mind and the second his self-respect. At the moment of writing, the not-so-young Jagat Singh is still looking for excuses to avoid interrogation by the Enforcement Directorate over deals done when Saddam Hussein looked good enough to last a couple of lifetimes, and former foreign minister Natwar Singh has returned to the capital's book release circuit while the political class waits breathlessly to find out if they have any names to name. It is an extraordinary paradox, but the real power of an accused lies in his ability to spread the accusation.

The government of Manmohan Singh and Sonia Gandhi came to power in 2004. It enjoyed power in 2005. In 2006, they will have to let us know why they are in power. Since the full life of an elected government is five years, it is permitted teenage luxuries in its first months, and youthful excess in its second year. In the third year it enters middle age, and its knees begin to feel the weight of office. Either the government finds the legs to move ahead briskly, or it hobbles like a lame duck. The last two years take much longer to pass than the first two. Those who know old age will confirm this.

The real relevance of 2005 is purely as a dress rehearsal for 2006. This is true not only of the government but also for the Opposition parties, be they principal or marginal. The BJP, for instance, will have to decide within the next twelve months whether it is going to enter the 21st century or remain a prisoner to the sectarian hatreds of the 20th. A child born on December 6, 1992, will be very close to voting age by the summer of 2009, when the next elections are formally due. December 1992 was not the beginning of a new era but the end of the old one; the hangover of such a potent intoxication might have lasted a bit but even that is over (hangovers are not pleasant in any case). The new, and even the old, voter is tired of voting for blood: surely the BJP understood this much from Bihar where it is in power because it followed Nitish Kumar rather than leading the NDA. If the BJP does not change decisively over 2006, it will meet the fate of the Shiv Sena, which is imploding into irrelevance: the last note of a roar is so often a whimper.

On the opposite end of the spectrum, the Communists will have to decide whether they are Marxists or pragmatists. The real strength of the Left now lies in its unwavering commitment to secularism; its economic ideas are irrelevant, and just the kind of deadweight that could condemn the upa government to a pathetic limp. The Communists can be permitted lip service to some very tired cliches till the Bengal elections. Once they have retained their only fortress, they will have to either get Dr Manmohan Singh out of the wheelchair or just get out of the way. By obstructing economic reform, they are denying their allies the chance to win the crucial vote of the young in the next elections. The one thing that the young will not forgive is the sabotage of economic growth. The young are young only once.

The Congress, in the centre, will probably decide, next year, its electoral strategy, for, the groundwork has to be laid in 2006 for the politics of the 2008/9 general elections. My own hunch is that it will decide to retain the alliance framework in principle, but reduce the number of allies in the Congress-led train. The Congress will maintain the alliance with the Left.

Communists make the perfect ally, since they provide the numbers without asking for ministerships. The hunger of Congress MPs therefore can be satiated at the expense of Marxist diffidence. The Left also provides sustaining ballast, since without the Left an alternative non-BJP alliance is impossible. But the Congress will want to chip away at clones in order to expand its individual base. One immediate candidate for a future chop is Sharad Pawar's party. The Congress is quite blatantly building its strength in Maharashtra, and doing so at the expense of the Shiv Sena. The Congress has slid from national party to a patchy regional force in stages; it cannot return to its heyday in one quantum leap. Similarly, it will take a call in Jharkhand. If it wants to fight the next elections alone, it will keep Shibu Soren on the margins on one pretext or the other. The biggest pretext, of course, is the Cabinet Reshuffle that will Always Happen Tomorrow. 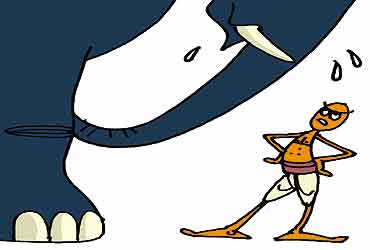 Which in turn means that the interim foreign minister of India could well morph into the regular foreign minister. The PM would probably want to lead from the front on the two dominant policy themes: the wooing of America and the peace process with Pakistan. In the case of George Bush, we have handed over the dowry without having got married; and there is a chance that he might demand nuptial rights during his visit to India in 2006 without showing us a marriage licence. Manmohan Singh has been far more circumspect with Pakistan, which is wise; but there will be pressure to accelerate, for Pakistan's President Pervez Musharraf has a potential deadline: 2007, when he is expected to take off his uniform. He will seek a definitive agreement on the way forward on Kashmir before that.

2005 was the gap year between 2004 and 2006. The government did not quite go on a year's holiday (although some MP should ask a question about the collective travel itinerary of Bharat Sarkar), but it did take time off to enjoy the lottery win of 2004. That is human and perfectly understandable. But a gap is followed by three years of purposeful work, or you fail. The countdown begins on January 1, 2006.

Editor of The Asian Age, M.J. Akbar is the author most recently of The Shade of Swords