Yatra On A Mazda Rath

Modi's campaign trailer is a marvel in design and innovation 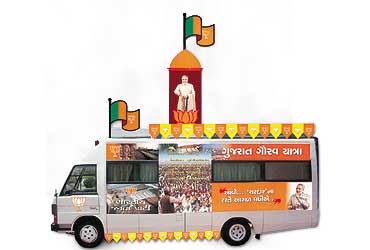 outlookindia.com
-0001-11-30T00:00:00+05:53
Between July and August, come Friday, Saturday and Sunday and Narendra Modi will hit the road on a yatra of his own. And how. The Gujarat Gaurav Yatra will not even pretend to be simple. The chariot, you are told, is a marvel of design and innovation. It is being worked on by a structural engineer who passed out of an American college and a designer from the National Institute of Design. It is essentially a Swaraj Mazda from which a hydraulic lift will elevate a domed podium in which Modi will surface to meet people at every stopover. As in such a political summit, so in hydraulics, only one man will rise at a time. Therefore, though Modi and state president Rajendrasinh Rana will travel in the Mazda, only one leader will rise at a time.

Bhupendra Amin, the engineer behind this, says, "The podium has a lotus in front on which Modi can rest his hand while addressing the people. There will be digital photographs detailing Gujarat's achievements stuck on the two sides of the van. There will be lights and a public address system. The van is air-conditioned and has a toilet."

According to the yatra's coordinator, Vijay Rupani, despite threats from Al Qaeda, Modi has rejected a proposal to use a bullet-proof glass enclosure in the podium. Explains Rupani: "He wants to speak to his people like a brave man." The Mazda will be followed by a string of vehicles carrying security personnel, pamphlets, the press and, of course, other leaders. Though there is space in the Mazda for a few heavy-weights, "Keshubhai Patel, Suresh Mehta and other leaders may want to travel separately," says Rupani clinically. There are also rumours that some BJP leaders opposed to Modi may even boycott the yatra when it passes through their constituencies.

On an average, there will be a stop every 10 km. Some meetings will be larger and longer than others but at the end of it, Modi would have visited all the 182 constituencies in the state. And it's from this chariot that he will try to neutralise the "misinformation" being spread by "the enemies of Gujarat".

The police has its worries about such a yatra. There have been suggestions that the chief minister should not announce his route in advance. That he should not stand in an open podium. But Modi likes things his way. And that's how they will be.