With Arafat gone, the contrary pulls in the movement begin to assert themselves Updates 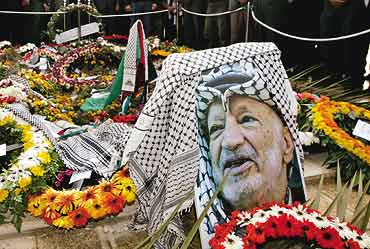 outlookindia.com
-0001-11-30T00:00:00+0553
Three days after PLO chairman Yasser Arafat's chaotic burial at his Ramallah office compound to which he was confined during the last years of his life, his successor Mahmoud Abbas (Abu Mazen), designated head of the PLO, was in Gaza Strip meeting mourners in a tent. A sudden eruption of gunfire, and two of Mazen's bodyguards fell dead. Although Abbas himself was unhurt, it was clear that the road ahead for Palestinians was going to be paved with more bullets. And the bullets would likely be fired by other Palestinians: Abbas' attackers were from the shadowy military wing of the Fatah movement, a group called the Al Aqsa Martyrs.

While he lived, Arafat was the glue that kept the various factions of the PLO together. His death has ripped apart this thin veneer of cohesiveness and exposed the bitterness of the many struggles within. This was immediately evident after Arafat's death when there was a quick four-way distribution of Arafat's main titles among four Palestinian leaders: Abbas was named the head of the PLO; Faruq Qaddumi (Abu Lutf) was named head of the Fatah, main political faction of the PLO; Ahmed Qurei (Abu Ala) was named prime minister and entrusted with the security portfolio; Rauhi Fattouh was made the head of the Palestinian Authority (PA). The new leadership then announced elections to the PA to be held in two months, on January 9. 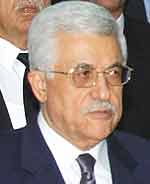 Admitting to contradictory pulls, sources close to Abbas told Outlook that "Arafat held all the positions and titles with an equilibrium that kept the system together. His demise has exposed the Palestinians to the fact of dismemberment. Arafat was the ultimate authority over all trends in the PLO, however contradictory. Only he could have contained the dangerous militias." 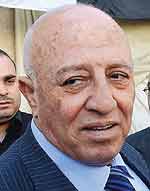 Abbas and Qurei both are aware of the inherent tensions and view the election as the source of authority they badly need. But they have much to contend with before they reach that democratic pass. One indication of this came recently when Dr Nabil Amru, who heads the board of directors of Palestinian daily al-Hayat-al-Jadeeda and who is a vocal critic of the corruption and mismanagement in the PLO leadership, was shot at inside his home even as he was embracing his granddaughter after returning from a television interview where he called for democratic reforms. His leg subsequently had to be amputated. And Aqsa Martyrs betrayed no hesitation in claiming credit for the shooting.

One of the main problems in the post-Arafat era will emerge not so much from the divisions between the secular Fatah and the religious Hamas as from the fissures inside the Fatah itself. The Aqsa Martyrs are an armed militia associated with the Fatah, but neither PLO in general nor its main political wing acknowledges links to them. Shortly before the attack on Abu Mazen, the Aqsa Martyrs distributed leaflets in which they declared themselves to be in "full alert" against attempts at betrayal. The leaflet also warned that any attempt—at any level of leadership—to tamper with the interests of the Palestinian people would be met promptly with armed reprisal. 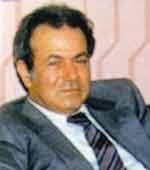 Arafat's exit from the scene has also brought to the fore the animosity between Abbas and Qaddumi, the new Fatah leader who has spent the last decade living in Tunis and more recently in Damascus. The dispute between them comes across best in the antagonism of the Aqsa Martyrs towards Abbas. While Abbas called for ending "militarised Intifada", going so far as to define it as "terror", Qaddumi has so far refused to accept the Oslo agreements. He has advocated instead that the "resistance" be escalated. He has, more significantly, maintained that the PA be dismantled. Qaddumi is also all for a return to "Falluja-style" secret struggle.In a recent interview to the Al Arab newspaper that comes out of Jordan, he revealed himself as a supporter on behalf of the PLO of the Iraqi resistance against the American-led occupation".There is no doubt that the Palestinian revolution supports the Iraqi resistance and we have seen demonstrations in the occupied Palestinian territories in backing the intifada and resistance in Iraq," he declared. Thus, whenever Abbas hears slogans being raised speaking of him being a "Palestinian Karzai" or the "Allawi of Palestine", he can be sure who is behind the sloganeering. The connection between the Aqsa Martyrs and Qaddumi was recently and vividly exposed when a Martyrs cell was caught in Nablus and admitted that it was financed by Qaddumi's office in Damascus. Qaddumi realises full well that were Abbas to push his demilitarisation agenda forward, the Aqsa Martyrs could well be put out of business.

Of course, at the heart of all these rifts lies the very difference between the PLO and the PA. The latter is the result of the Oslo Agreement and draws its legitimacy from the peace process and the agreements with Israel to have a Palestinian state in the Territories after an interim period. It is, moreover, an elected body. The PLO, on the other hand, is a "revolutionary" body of the Palestinian struggle and as such derives its legitimacy from the battlefield. It isn't subject to elections. Thus while Abbas does not need to get elected to the PLO he, nevertheless, needs legitimacy through the PA, in addition to the PLO position he now holds. Many, however, are beginning to question this. Among them is Hanan Ashrawi, an articulate member of the Palestinian legislative council from East Jerusalem, who asks why elections should be held only for the PA and not the PLO that claims supremacy over the PA. Polls have shown Hafez Barghouti, co-editor of the Fatah paper al-Hayat-al-Jadeeda, to be a far more popular figure than Abbas.

So, even as the old guard in the founding generation of the PLO is locked in struggle, there has emerged a new generation of young leaders wanting to claim its share of political space. Two controversial names have cropped up as forerunners: Muhammad Dahlan, head of the Preventive Security in Gaza, and Marwan Barghouti from Ramallah, a leader of the belligerent Fatah faction who is now in prison. Many Israeli left-wingers are politically attracted to these men. Prof Sha'ul Mish'al of Tel Aviv University, for example, supports Barghouti's candidacy for head of the PA on grounds that "this local leadership is close to us. They know us and it is easier to talk to those kind of people (as opposed to newcomers from Tunis)". In off-the-record briefings, Israeli security sources also express support for them as successors to Arafat, overlooking in the process the 150-year prison term that has been handed to Barghouti for killing Israelis in the Intifada.

As for Israel, Prime Minister Ariel Sharon supports the election, including in East Jerusalem. Read simply, it means he does not want Palestinians of East Jerusalem to be in any way part of Israeli politics and to be able to participate in the vote to the Knesset.