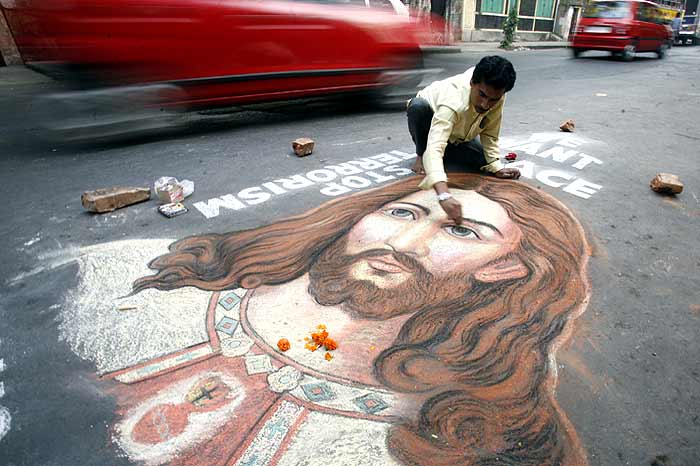 This doorstopper of a book is really one long polemical pamphlet. The authors’ intention is historiographical confrontation with Bible-thumpers in Tamil Nadu, but what they lack is expertise in handling historical data and a professional approach.

Rajiv Malhotra, who appears to be the main architect of this book, belongs to the diaspora. The difference between the world-view of the diasporic Indian and the Indian of the homeland is vast. The middle-class diaspora of Indian professionals in the States is probably the richest community of US migrants, yet they have been unable to attain either first-class citizen status or get political leverage. They know first hand the fragility of an existence which experiences exclusion in various domains of social living. Their minority status and marginality in the US provides the ground for Yankee Hindutva.

The authors see three major civilisations competing for global dominance today—the West (especially the US), China and Islam. All three have diabolical designs of splitting India, according to them, and they focus on Western efforts to break India. The problem we have is not in the study of Western intervention, though, curiously, Yankee Hindutva attempts to usurp the language of anti-imperialism. Often enough, the reader does a double take—is s/he reading Prakash Karat or Rajiv Malhotra?

The problem is in analysing Dravidian and Dalit faultlines. They don’t get wished away by denial. One would expect the authors to analyse these faultlines, acknowledge the limited validity of conversions and identity politics, and discuss their limitations. Instead, they are in denial throughout and consequently fall into outrageous positions. According to them, Maoists in Dantewada get vital information from the Chinese (from their espionage on India’s defence networks and embassy communications), famed Bharatanatyam dancer Leela Samson is an evangelist, former CEC Seshan is quoted to prove that Annadurai was a pawn of the CIA. Malhotra bemoans that China’s government controls academic studies there while India’s government does not, he wonders if India has too much democracy, he is angry that there are studies on how Raja Rao is prejudiced against his Muslim characters, or how there are very few Muslim characters in Tagore’s works (now isn’t that interesting?), and he speaks extensively of the Maoist-Chinese venture in the Red Corridor from Chhattisgarh to Nepal. His take on the 2002 Gujarat genocide: “...the violent Hindu retaliation to the Godhra carnage—a Hindu-Muslim bloodbath, both sides lost lives but the Muslims lost more.”

More than half the book deals with a father-and-daughter duo, Devianayagam and Devakala; have you heard of them? They are Tamil evangelists, and while I hold no brief for either of them, I find it hard to believe, as Malhotra does, that they are Enemies Number One and Two in India. In reality, the largest numbers of Bible-thumpers are in Andhra Pradesh, which also records the largest volume of Christian funding from abroad and the largest number of ngos. But strangely the authors have no explanation why this should be so, despite Andhra Pradesh not being noted for Dravidian rhetoric as Tamil Nadu is.

Should we be embarrassed when Dalits take their issues to international fora? Maybe it sounds distasteful to you and I, but possibly we are not Dalits. As long as the Indian state and society oppresses Muslims, Northeasterners, Kashmiris and Dalits, it is natural for them to garner what support they can.

The Aryan invasion theory occupies considerable place in the book. While Dravidianists insist on the fact of an Aryan invasion (and are supported by studies of scholars such as Romila Thapar), Malhotra disproves them—but uses the same tiresome polemic without the attendant scholarship. The reader may not want to take sides, but would certainly have wanted to know about important scholarship in the area.

The conclusion is rather surprising, or is it? Malhotra sees the possibility of an alliance with the US. According to Malhotra, the US wants to build up India (containment of Chinese and Islamic threat, as a market, etc.), and it could possibly stop giving aid to India’s Dravidianists and Dalits. The conclusion reveals that the book is really aimed at US policymakers in a bid to promote an alliance between the US state and Yankee Hindutvavadis.